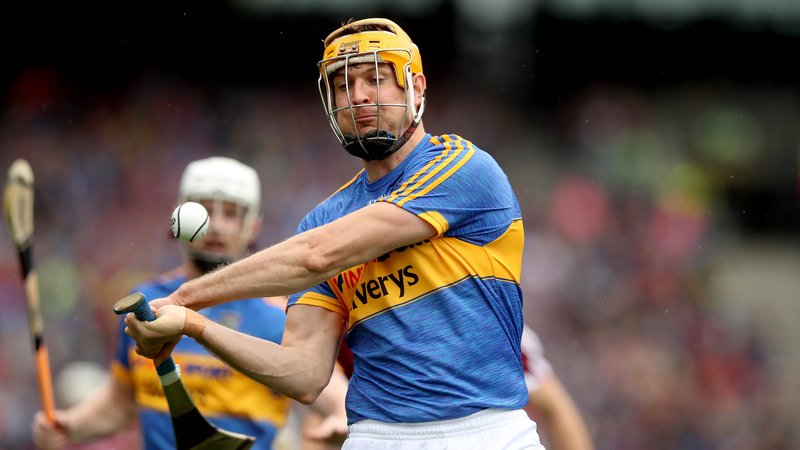 Maybe I can be accused of recency bias on this one, but in another way, it’s hard not to give credit where it’s due. And in the case of Callanan’s performance in the All-Ireland final last year, a hell of a lot of credit is due. 9 points from play was good enough to win him man of the match, and probably should have been more than enough to win him hurler of the year. The only wonder is why Brian Cody persisted in the game without making a change on him. In a sense, you could say that people were over-generous to land the garlands at O’Donnell’s feet, considering he would have been expected to score the 3 goal chances that were presented to him, but how many players in one of their first inter-county championship matches, would have buried them with such aplomb? Not only that, but he managed to get 3 points on top of it. If that’s not composure on the big stage, I don’t know what is. Until 2000, DJ Carey’s career was always tarnished with the asterisk “Yeah, he’s great and all, but has he ever done it in an All-Ireland final?” Well he answered those critics and then some. Now of course, it could be argued that he already had a good game in 1992, and his type of style was more explosive than to dominate for 70 minutes. Still and all though, to score the all-important early goal, net another one and then get 4 points on top of that, one while falling on his back, was mightily impressive. If only the team of the Millenium was picked after this final, he may well have been in it. Ok. Yeah, we know he touched the ball just seven times in the final. So how much can you really influence the game when you are involved so infrequently? On saying that though he made those touches count. Anyone who scores 3 goals in an All-Ireland final, particularly against your biggest rivals who are going for 5 in a row has won a few brownie points. In the pantheon of great Kilkenny goalkeepers, PJ Ryan would never be held in the same esteem as the likes of Noel Skehan and Ollie Walsh. What he did though, was give arguably his finest ever performance for the county in one of the biggest, or perhaps the biggest, game of his career. In the 2009 final Ryan’s saves from Eoin Kelly, and particularly, his awe inspiring stop from Seamus Callanan were two of the most pivotal moments in securing the Cats’ four in a row. If he was never to play another inter-county match in his life, he would still have earned his corn in the one he did. I guess you could say it was a game of two halves, or to be more apt, one exceptionally poor 25 minute spell followed by an exceedingly good 45 minute one. Brian Whelehan was such an artist on the field it’s debatable he could have played in any position at any time but that final was one where he fully demonstrated his ambidexterity. Waking up sick on the day of the game, Brian McEvoy took him to the cleaners in the opening quarter and he was likely to be taken off, were it not for the fact that the Offaly management, in their infinite wisdom, decided to move up to the forward line for a while. Somehow he managed to find the strength from there to score 1-6, 1-3 of it from play, to win the All-Ireland for his county and the man of the match award for himself. So while it may not have been the best individual All-Ireland performance of all time, it was certainly one of the best stories. Not the most spectacular final but with that Cork team at the peak of their powers their star Newtonshandrum forward was certainly at the peak of his. 1-5 from play is notable in any game, but to do in a fixture of that magnitude is a hell of a performance. He even managed to throw in a few scores from frees as the cherry on top. Not a great final by any means, and not one where Kilkenny had to be in fifth gear throughout in order to win. But when the game needed to be won in the early stages, there was one man in particular who did the winning. “Fast Eddie’s” goal in the early stages, was a deathknell for Limerick’s hopes, displaying at it did the killer instinct for which Cody’s side would forever be known. He added another 5 points from play too so all things considered, his man of the match award was well earned. Similar to O’Donnell, Walsh was the rabbit pulled out of the hat for the 2012 All-Ireland replay by Brian Cody. It was his first ever inter-county game and he went from being a complete unknown to an All-Ireland winner and man of the match. There may have been better All-Ireland performances, but aside from O’Donnell, there were few that were more dramatic. It’s never been easy for defenders to grab the highlight in these games. In the last 25 years of RTE man of the match awards, backs have only grabbed the limelight on 9 occasions from 28 finals. They’ve been even less prevalent in recent years, as 6 of those awards were in the 90’s. Of those, perhaps Corcoran’s tour de force in 1999 was the best. It was an absolute dog of a day, more of a backs day than a forwards one to be honest but even given that, Corcoran’s determination and class won out. He was a most deserving hurler of the year, and one of the best players of his generation.

No arguments here. The greatest performance ever by arguably the greatest team of all time. It was the biggest winning margin by a team since 1943 and in a final where they scored a barely plausible 3-30 they hit only 3 wides, and apparently one of them should have been called a point! The display  was so good, they didn’t even give a man of the match award on RTE but gave it to the team manager Brian Cody instead. A bit of a cop-out maybe, but there was no arguing with the players on the field.