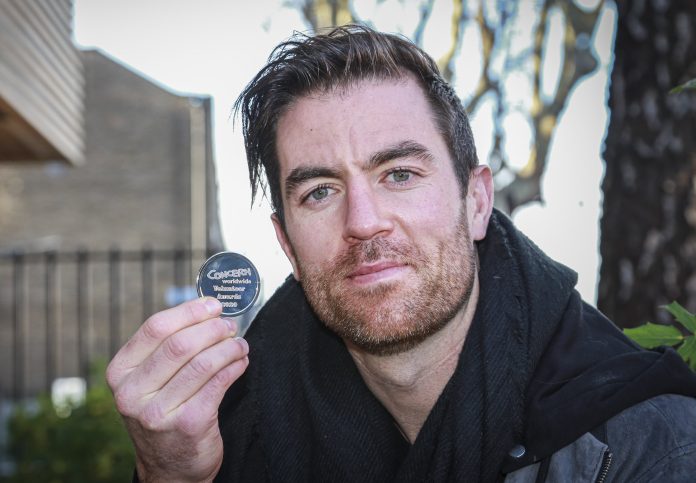 The seven-time All-Ireland medal winner was presented with his new piece of silverware for his “outstanding commitment” at Concern’s Dublin office ahead of its annual volunteer awards, which was hosted virtually on Saturday (December 5).

Michael Darragh was one of 32 people from all over Ireland to be awarded by Concern for their volunteering efforts.

The Ballyboden St. Enda’s player – who has visited Syrian refugees in Iraq and children living in slums in Kenya in his Concern ambassador role – said: “This was very unexpected, but I am delighted with it.

“I am not sure how much I deserve it, but I’ll take whatever medals I can get these days! Seriously though, I’ve had huge grá for what Concern Worldwide do around the world.

“I was an admirer before they asked me to get involved, and since being on board I have even more respect for the work they do with those less fortunate.

“The experiences I have had with the people of Kenya and Iraq will be with me for a long time and I look forward to staying involved with Concern in any way I can going forward.”

Concern’s Chief Executive, Dominic MacSorley, praised the organisation’s many volunteers and thanked Michael Darragh for helping them raise awareness of their work in the world’s poorest countries.

“As we face into a winter like no other, I’d like to take this opportunity to thank Michael Darragh Macauley for his outstanding commitment to Concern,” he said.

“People know Michael as a remarkable footballer, but he is also a committed humanitarian.

“He has creatively and compassionately used his profile to help Concern raise awareness of our work- whether it’s through conversations with children in Iraq forced to flee their home in Syria because of relentless warfare, or in the schools of Nairobi, Kenya where he channelled messages from his own pupils at Scoil Maelruain Junior in Tallaght.

“Michael Darragh is a remarkable activist and we applaud him for all his charitable work both here in Ireland and overseas with Concern.”

Concern’s Volunteer Awards began in 2013 to celebrate the vital contribution made by the organisation’s 1,700 volunteers in Ireland.

Many raise funds that enable Concern to continue to alleviate poverty and hunger – which last year alone saw 28.6 million people reached in 24 countries.

Concern was formed in 1968 as part of a major humanitarian response to the Biafran famine in Nigeria.

More information about its work or how to support the aid agency can be found on its website at www.concern.net.

5 reasons to tune into All Ireland Football Finals