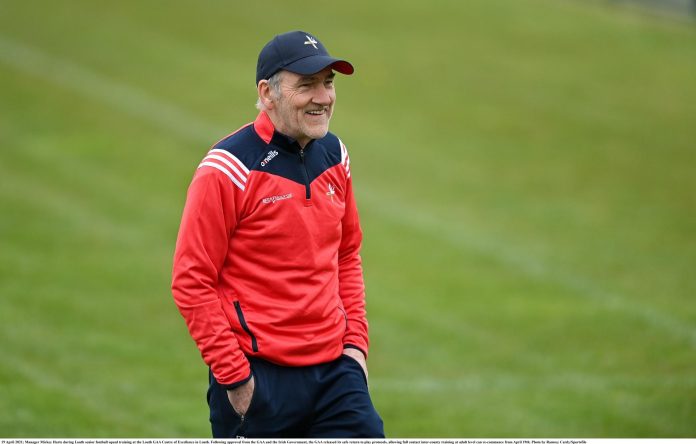 Louth manager Mickey Harte has agreed a contract extension that will see him remain in charge of the Wee County until 2025.
When Harte took over the reigns at Louth, he and Gavin Devlin agreed a three year deal but recently they agreed to stay on for a further two years.
Harte got Louth promoted from Division 4 last year and they are in poll position to gain a from Division 3 on Sunday; all they need is to avoid defeat to Wicklow. After a defeat and draw in their opening two games Louth have recorded four wins in a row and are currently top of the division. Promotion will see Louth enter the All-Ireland series instead of the inaugural Tailteann Cup.
Louth Chairman Peter Fitzpatrick told RTE Sport: “Mickey came in on a three-year term, but we (the county board) met him lately and told him we were fully behind him and that we were not looking for a short-term fix.
“The result of that chat was that Mickey and coach Gavin (Devlin) agreed to stay an extra two years with us. So, it will be a five-year term with Louth in total.”

HAPPY RETURNS FROM LONDON FOR THE TREATY