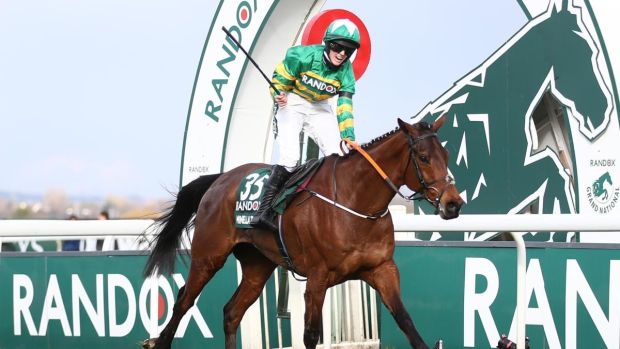 Henry de Bromhead is of the opinion that Minella Times is “back on song” as he bids for a famous repeat in the Randox Grand National at Aintree on Saturday week.
Minella Times won last year’s Grand National for jockey Rachael Blackmore. De Bromhead is set to run four in the race; Chris’s Dream, Court Maid and Poker Party. Notebook could also lrace in Friday’s Topham Chase.
Blackmore became the first woman to ride the winner of the world’s most famous steeplechase. The Waterford trainer said: “We definitely did enjoy it. It was some achievement by Rachael and to be involved in it all was brilliant. To see our three runners going out on the second circuit was pretty incredible. We lost Chris’s Dream (unseated four out), but to see Balko and Minella Times both there in the first four or five with three to jump was unreal.
“I thought Burrows Saint and Patrick Mullins were going better than any of ours at the time, but jumping the last it was some buzz.
Blackmore entered into the history books at Cheltenham; becoming the first female jockey to win the Cheltenham Gold Cup on A Plus Tard for de Bromhead.
Of the other horses he is entering de Bromhead said: “Chris’s Dream looked to be going well and seemed to be enjoying himself when he unseated last year.
“We bought Court Maid the other day as we thought she had a really nice profile for the race. We were delighted to get her – she could run really well, hopefully.
“She’s a high-class mare who has won over three and a half miles – and to be able to drop back to two miles at Naas and run as well as she did, we just felt she made a lot of sense.”

Epatante can cause upset says Henderson

O’Brien has high hopes for Tenebrism