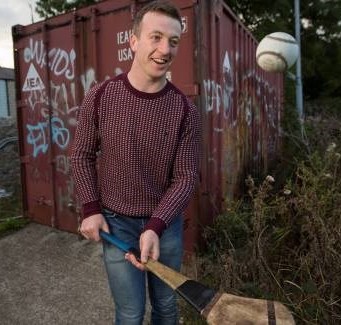 Seamus, first of all thanks again for taking the time to respond to Sportstalk.

The last time that many people (outside of Tipp) might have heard of you is the excellent Irish Examiner article you did with Kieran Shannon a couple of years back. That piece answered a lot of questions that the casual GAA observer would have had about you – specifically where this exciting young hurler had gone. However it also revealed some things about you and your life that not too many people outside of Cloughjordan or Tipperary would have been aware of. What kind of a response did you get from that article?

The response to the article was incredibly positive. I guess the combination of the authenticity of the subjects covered along with Kieran’s writing expertise allowed for a very genuine story to be told which resonated with people and as you say, provided some insights to my life that many people would not have been aware of.

You are obviously held in very high esteem in the Tipperary hurling fraternity. Do you still keep in touch with many of the lads from your time with the county teams?

Aside from an odd text here and there to wish guys the best of luck, I would only run into guys after club games or ex-players in the stands at Tipperary matches.

It’s been covered numerous times before but you were part of a generation of young Tipperary hurlers that seemed destined to knock Kilkenny from hurling’s summit. Five full summers have passed since 2010 and in that time Kilkenny have only strengthened their grip on the game.  When you were involved in the set up did you see yourselves as equals to Kilkenny; did they cast a shadow over everything Tipperary built towards or were they just treated the same as any other opponent?

I certainly believed we were equals with Kilkenny but for me the same applied with any other team we faced also. Of course we knew that to win an All-Ireland, you were likely to have to beat them and given their quality as a team at the time, you knew you had to be really well prepared to achieve that.

Do you think they have a psychological hold over other counties?

Rather than Kilkenny having a ‘hold’ on other teams, I think it’s the belief and resilience of the Kilkenny team itself that presents the biggest challenge to the opposition. As we have seen on numerous occasions, you can never discount Kilkenny no matter what the score line reads. They continue to play and compete right to the end every time the play.  Their at-the-death victory over Cork in the league this year is just one example of this.

Things seem to be building nicely for Tipp again this summer. What has been your impression of the year so far for Tipp and the state of the championship in general?

I have been really impressed with Tipperary so far this year. They have dealt comfortably with the challenges in Munster and have shown they can manage the sweeper system which they faced against Cork, Limerick and Waterford.

Three/ four new players have bedded in very comfortably from the 2015 season to help cope with the retirements of some huge figures in the Tipperary camp. We have been very fluid in attack (averaging 26 points per game in Munster) and in defence we have been extremely resolute. An average concession of 15 points per game in Munster highlights how well the entire team are defending and this rate of concession is the most pleasing aspect of the year so far for me.

The championship in general I feel has been only OK. We haven’t had any really exciting game or shock yet, aside  from Wexford and Cork possibly although Wexford were full value for their win so I wouldn’t consider that a shock. The focus on systems and structure, primarily defensive in nature, has taken some of the excitement and spontaneity out of the game.

I don’t agree that a sweeper system paves the way to success because based on the evidence of Championship 2016, the teams who play an orthodox 6 attackers and implement an attacking approach based on quick delivery of the ball into the danger zone with strong forceful support runs towards goal are those who have collected the trophies so far (i.e. Tipperary and Kilkenny.)

Hopefully the remaining knockout games will produce a higher level of excitement however.

I remember watching the 2010 Fitzgibbon Cup final between your NUIG team and WIT. I have to say you were the one that typified NUIG’s never say die spirit that day. That equalising point must be something you think of every now and again?

No it’s not something I give any time thinking about really. We needed a score to keep us in with a chance of winning and I just happened to be the one to get it. My only thought on that victory with NUIG is how pleased I was for the likes of John Lee, Finian Coone, Michael O Connor and ‘Horse’ Regan as those guys had lost finals previously and soldiered for years to win a Fitzgibbon with NUIG.

Have you kept in touch with many of that NUIG team?

I wouldn’t be in regular contact with many of that squad at all really. Diarmaid Nash (corner back on the team) and I live together in Dublin and Shane Quinlan is a clubmate of mine but that would be the only regular contact at the minute. In saying that, if I ran into any of the guys it would be very easy to pick up conversation as there was a great bond among that side.

It seems to be an exciting time for your club Kilruane MacDonaghs. You gave Thurles Sarsfields a difficult game in the county semi-final last year. By all accounts you put in a serious shift that day and threw over three points. How did it feel to be back hurling at such a high level?

Yeah it was really fun to get back to the playing in the Stadium and taking on teams of the quality of Thurles Sarsfields. There were times over the previous couple of years when I wasn’t sure that chance might present itself for me again. However, the above feelings weren’t long taking a sour taste when we lost the game.

How is it going with the club this summer?

It’s going OK with Kilruane this season so far. We’ve won 2 games and lost 1 in the county series and are preparing to play Borris-Ileigh in the North championship next week.

You have minor, under 21 and senior All Ireland winners medals, as well as the Fitzgibbon Cup. Do you think you might get to add a senior club championship to your haul?

I don’t know if it’s something I’ll get my hands on but it’s a medal I would dearly love to win.

When you train and play matches now, can you really cut loose or is there always a voice that tells you to hold back in case the knee flares up?

I certainly do my best not to hold back because of my knee but from time to time it does flare up a little and can need a couple of weeks rest to settle down. This is obviously quite frustrating but it’s more a mental rather than physical challenge I find. The strength of the ‘’top two’’ inches is what I rely on to keep moving forward. But no, there’s no voice of my own telling me to be careful.

Is there any chance that your knee could ever hold up to intercounty training again or would you even be prepared to put yourself through that?

There’s no doubt it would take a lot of work and management to play at intercounty level with the injury I had but it’s certainly possible, assuming the strength and conditioning structure in place would have the level of flexibility required to accommodate your requirements.

I would have no problem doing the work required to compete and win at that level if it was something I really wanted to do but with where I am in life right now, it’s not something I am looking to do again.

What emotions do you go through when you watch intercounty hurling now?

I go through the same emotions as any regular supporter now I think. Joy when the team wins, sadness when they lose, excitement for what the future holds. But most of all, hope and desire for the players that they win an All-Ireland. They’ve endured some tough days the past couple of years and as a supporter, I’d really love to see this group of players get their hands on Liam McCarthy.

You weren’t born when Kilruane MacDonaghs won the club All Ireland in 1986. Of course your father played that day. Does he ever talk about that match?

No it’s not something we have discussed for a long long time. When I was much younger, I would have asked him some questions on his career and players/teams he faced but it’s a long while since we went down memory lane.

Final question. Greatest player you shared a pitch with?

There are two for me. Paul Curran of Mullinahone & Tipperary and Michaela Morkan of Shinrone & Offaly.

For me, choosing the greatest hurler I played with encompasses much more than just hurling talent or ability. It includes how a player prepares, their influence on team mates, the respect they’re held in by their peers, their desire to win, the consistency they bring to their game and whether you could depend on the player to perform when it was required most.

Paul had all of these attributes in spades when I played with him and is a person and hurler I have absolute admiration for.

Likewise with Michaela, I worked with her in NUIG for a couple of seasons and she epitomised all of the above attributes also and is a player I admire and respect enormously.