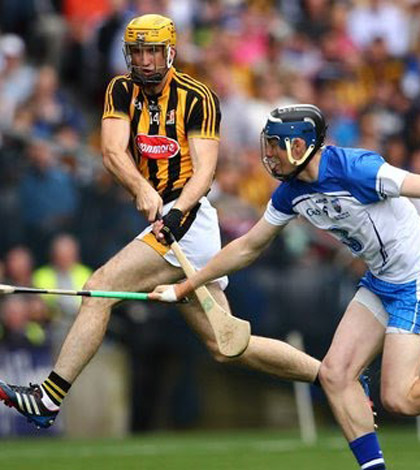 Ask any GAA club goalkeeper and they’ll tell you that the ramblings and conversations between umpires and themselves can keep them entertained on their dullest of days between the posts. In the first half they are shy and enthused in doing a good, “fair” job but by 2nd half their interest has waned and they just want to chat. Last Tuesday as I stood almost spectator like for my club behind the usual dominant Noel Hickey, I listened as the two opposing umpires chatted about the upcoming semi final between Waterford and Kilkenny. “How do you think the game will go Sunday?” asked one. “Who cares anymore,” replied the other. The hurling championship of 2016 summed up in one reply…until yesterday.

26 games down and with only 3 left, supporters hadn’t laid eyes on even one memorable battle this year. The hurling Gods seemed to have been hungover when planning out the years championship, a carbon copy of 2015 with the same provincial winners and four teams colliding in the semis. The championship to date had been dominated by the sweeper system. Yesterday the hurling we grew up watching , playing and loving unveiled itself once again. The 30 yard uncontested short puck outs replaced with the sight two giants battling it out in aerial combat.40 yard possession game around midfield or hurling tennis between the sweepers replaced with end to end attacks. The emphasis on accuracy restored instead of shoot on sight instruction.

The match was a classic for 3 simple reasons. Firstly, having played with the handbrake on for the whole year Waterford followed their successful u21 counterparts and hurled with aggression, a freedom and a belief unseen so far this year in championship. The shackles were cast aside as they out muscled and out fought Kilkenny throughout the whole field. They squeezed Kilkenny in their own half and mopped up any loose clearances before launching another attack. Derek McGrath knew that in order to win the Liam Mccarty a meeting with Kilkenny was inevitable and must have been keeping this plan in his arsenal all year. He deserves huge credit. To go from playing the sweeper system in every game for two years to going 15 on 15 (in the main)took guts. It must have also been a huge boost to the team mentally when the plan was been delivered that they finally trusted them to go man for man.

Secondly, there will be few games ever seen again in Croker with the level of accuracy shown from both teams. At one point there were 22 scores registered on the scoreboard with only two wides clocked up. Pauric Mahoney, Austin Gleeson, Tj Reid, from frees and Richie Hogan until sacrificed and placed in full forward to free up TJ accounting for 34 of the 46 scores on a day when they shot the lights out.

Thirdly, Kilkenny’s never say die attitude once again brought them back from an almost unwinnable position. Sure 5 points down with 10 minutes to go isn’t the greatest comeback of all time but this was on a day when few if any dominated their man. A resemblance between the drawn All Ireland with Galway in 2012 comes to mind, completely outplayed but somehow squeezing out a result. This is what makes the team great. No matter what the score, no matter how bad a situation they find themselves in, there’s always a belief that they will think, fight and play their way out of it.

With just 6 days until the replay the approach of the managers is key. Waterford of course deep down will be sick. Until the 60th minute they looked to have the game in the bag until they reverted back to the safety of their own half inviting Kilkenny on leading to the all important Wally Walsh goal. Derek Mcgrath will and must focus on the mountain of positives they showed as they will now realise they are as good as anyone once they are allowed play. Some supporters suggested Kilkenny came in complacent. Rubbish. Some of the most composed and best delivered speeches that I remember were in the run up to a semi final. It’s where all mentors and players are most cautious. I’ve no doubt that Brian would have stood observing each player and snuffed out even the thought of complacency last week. This week he’ll be a man possessed. This situation is where Brian Cody’s genius is brought to light. He will no doubt have watched the game 5 times already and discovered some little chink in the Waterford armour to exploit come Saturday along with mending any of his own. Some pundits claim Waterford will have the legs on Kilkenny in the replay and that their winning run looks like it’s coming to an end.

Beware of the sting of the dying wasp!