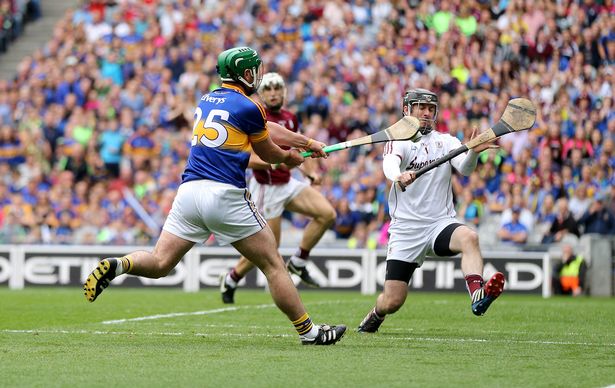 And then there were two. It wouldn’t have taken a genius to work this pairing out months back but by no means could anyone have guessed that the three thrilling semi-final battles would have been decided by an aggregate of a measly 3 points. Before we talk about the two victorious teams lets focus on the heart breaking narrow defeats for Waterford and Galway.

Entering the championship playing what most believed was puke hurling, Waterford have exited with the applause and admiration of all the hurling family. Again on Saturday they out battled and out fought the empire that is Kilkenny in periods but like so many before them they came up agonisingly short. Were it not for the astonishing leap from Eoin Murphy in goal to catch Pauric Mahony’s free they could have dragged the game into extra time and taken victory from the champs. Labelled as a team incapable of creating goals their new all-out attack ran straight at the heart of the Kilkenny defence yielding two within the first quarter from Gleeson and Dillon showing their renewed confidence absent in the Munster final. Austin Gleeson somehow managed to top his Croker performance and such was his dominance it needed a trip by Michael Dempsey down to Eoin Murphy to instruct him to keep the ball away from him for all puck outs.

Waterford will surely look back to the three points they conceded in the five minutes before the break as the time when they gave Kilkenny breathing space, the first time Kilkenny led at half time all championship. The introduction of a fired up Maurice Shanahan gave their attack renewed energy and possibly he could have been brought on earlier. Although they will know they could have snatched victory near the end they’ll enter the 2017 season as a team to be feared. With the prospect of an u21 All Ireland appearance and title, the supporters and players can still end the season on a hugely positive note. Their next move will surely be to nail down the services of Derek McGrath who worryingly for Waterford players and supporters had the sound of resignation in his voice in the after match interview. They’ll need to limit any retirements to the veterans also as they’ll look to build on a hugely progressive year.

Galway exited the championship once again and the 28 year wait for the return of Liam McCarthy rolls over to 29. Unlike previous losing Galway teams, they can take minor comfort knowing this time they performed. The loss of Canning and Tuohy on the stroke of half time were killer blows. Coughing up two further goal opportunities in the first half when they were on top and especially when David Burke was untouchable at midfield came back to haunt them late on. Having come into the job late following the ousting of Anthony Cunningham, Micháel Donoghue will now have a full off season to put his stamp on the panel and surely make a clearing of some of the seasoned campaigners. He will also have a huge boost with the expected return of Jonathon Glynn, a man mountain under puck outs and a massive leader last year. Unfortunately for Galway the promising new talent that lit up 2015 campaign didn’t develop further this year and it will be key for Donoghue to get this right if they are ever to climb the Hogan Stand steps in September.
Now on to the finalists, as the year has progressed the favourite tag has been hand passed from Kilkenny to Tipperary, back and forth again and again such has been their indifferent performances during games. On Saturday Kilkenny were awesome.

As expected, Brian yielded his axe, plucked two unexpected newbies from the bench, rejigged his formation, astonishingly placing his two most potent forwards at midfield, isolated Colin Fennelly in on Coughlan on the edge of the square and once again showed all the rest of Ireland why he is the maestro. Did all his plans work? When don’t they. In the words of a former team mate, “If Brian Cody slipped  into the River Nore, he’d emerge with the Salmon of Knowledge.” It’s gone beyond saying he is a lucky manager, you simply can’t get that lucky every time, this is a genius at play. In the aftermath of the drawn game the confidence of the supporters was rightfully subdued.

Kilkenny weren’t playing fluently. Following last year’s final victory, the supporters came in for some criticism for not staying on to applaud their team on the lap of honour. You almost felt a distance developing between the team and supporters due to the fact they won the McCarthy cup with such ease, crazy as that statement seems. On Saturday night you got the feeling that once again the buzz is back. There’s nothing greater than seeing the real greats of the game backed up in a corner only to somehow fight their way out once again to victory. Certainly nothing better still than facing your arch rivals on final day!

In a much less intense but no less exciting finish, Tipperary scraped through against Galway. Exploding from the traps they worked brilliantly as a unit up front, supporting each other on every attack and picking off Galway point after point. The McGrath brothers punished any slack defending while Bonner Maher once more showed why hard work coupled with skill is the most potent combination of all. However, they will definitely know they got out of jail on Sunday, as the curse of no winning Munster team going on to win the All Ireland since Cork ’05 looked like it would strike once again. Hitting 14 wides and looking out of sorts for long periods, probably due to the 5-week layoff, they will know that they have a lot of improving to do before the Sept 4th showdown. But semi-finals are about winning and they did just that. Like Kilkenny, the trainers will surely love the extra bite in training with places up for grabs. Although a surprising non-starter, Bubbles’ goal proved to be the game changer and he will surely squeeze his way onto the team for the next outing.

Who will win? After the weekends performances, I would have confidently sided with Kilkenny. The extra, much needed game knocking any rustiness off them plus given much needed confidence boosting displays to man of the match Colin Fennelly, the towering Walter Walsh and the ever youthful Eoin Larkin. Added to this, Richie Hogan seems to be surpassing the Player of the Year campaign of 2014. However, the loss of Michael Fennelly to a ruptured Achilles tendon is incalculable. It is no coincidence that his departure led to Waterford’s 5 point recovery to draw the game. The man is a colossus. People talk about Tommy, JJ and Henry being Cody’s top 3 most influential players. If that’s the case, Fennelly is guaranteed the 4th spot. Since establishing himself at the turn of the decade he has been Kilkenny’s most consistent and best player, a box to box runner, dispossessing the opposition with his 37-and-a-half-inch hurl before setting up attacks.

The silver lining is that Kilkenny have time to plan without him and now know the effort needed to compensate for his loss. I feel his absence has made this game a much more even contest. While the world watches on in Rio you can almost become hypnotised with applauding runners up achievements and thinking second place finishes are perfectly acceptable. However, this is hurling! Both panels will know there will be no silver medals handed out come the final whistle. This is cut throat; dog eat dog time. Lose and its heartbreak, win and ye are heroes. Roll on Sept 4th!

Underdogs are looking for interested hurlers for new series