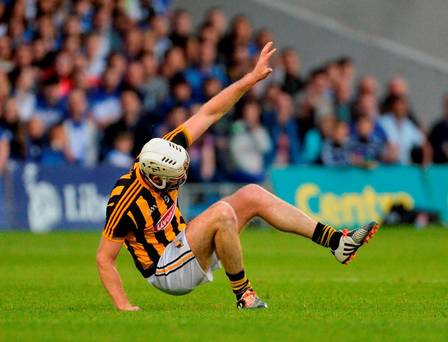 Michael Fennelly’s hurling year came to an end mid-way through the second half of the All Ireland semi final replay with Waterford. The injury looked serious straight away and unfortunately Kilkenny’s worst fears were confirmed on Monday when Fennelly was ruled out for up to six months. He will be a huge loss to Kilkenny in the midfield battle against Tipperary. I think the whole country were hoping to see himself and Michael Breen go to battle. We wish Michael the very best in his recovery.

Sportstalk: Tell us about the injury

Michael Fennelly: Rupture occurred in my Achilles heel which joins your calf to your heel. It is the biggest and strongest tendon in your body so it’s quite serious. I have surgery due on the 22nd of August to repair the Achilles and will then commence the rehab phase.

ST: Did you know straight away the injury was serious? Had you trouble with your Achilles in the lead up to the game?

MF: YES, I was in a lot of pain at the time and I felt a loud pop. Unfortunately, Richie Hogan thought I had a cramp and began to stretch out my leg which added nicely to the pain. At that moment in time you don’t want anyone evening touching you as the pain is excruciating.  The time I injured my ankles before in 2012 & 2013, I was in more pain back then when the injury occurred.

ST: Who is the toughest player that you ever marked?

MF: I have had the pleasure of playing against many top class players over the years with battles from Brick Walsh, Tom Kenny, Kevin Moran, David Burke & my own club mate Cha Fitzpatrick et al.

ST: Will we see you in a Kilkenny jersey again?

MF: I’m not going to think about that at the moment. It’s imperative I get the achilles back to full health. Unfortunately, I have other issues with my body (back etc.) so it will all depend on how they are coping also.

ST: What’s the best/worst thing about been an inter county hurler?

MF: Worst – No summer holidays, can’t plan anything a week in advance and miss or have to go home early from social events.

Best – Playing at the top level for your county team and playing in front of thousands of supporters come game day which can be electric.

ST: Did you notice the applause you received from Kilkenny and Waterford fans as you went off injured?

MF: Yes, I heard an applause and I think Dan Shanahan wished me good luck as I was going in but the pain probably overshadowed everything.

ST: Do you think midfield has changed much in the last ten years?

MF: Not really to be honest, I think it’s an area that needs quite athletic players who can get up and down the field. Derrick Lyng was a player who had that athleticism and was tough as nails. Possibly having a big player and maybe a smaller/faster player could be the best partnership. It can also depend on the size of the pitch; Croke Park is a very open field where it might suit a smaller player but playing in place like Portlaoise would be a different story.

ST: How are you going to deal with not playing in the All Ireland? When do you think it will hit you most?

MF: I’m probably in ‘no mans’ land at the minute – feeling of being lost. My immediate priority is getting the swelling down for Mondays operation and I’m also looking forward to seeing the lads train. It won’t hit me until All Ireland final day when I’m not doing my normal prep, bringing my gear and unfortunately just being a spectator for the day.

ST: Which was your favourite All Ireland victory?

MF: Each of them has been special in their own right and all tell their own story. 2011 was a very important year for me, I had been nominated as player of the year in 2010 and I wanted to back that up the following year and not be a player who comes and goes. Coming off a heavy defeat from Tipperary in 2010 and people asking the questions were we finished as a team was the burning drive for us that year. After the final whistle I couldn’t believe we had done it and scoring a goal that day really put the icing on the cake.

Fennelly celebrates scoring a goal in the 2011 All Ireland final

ST: What is it like hurling the full year round, going from winning All Ireland with Kilkenny to winning an All-Ireland with Ballyhale?

MF: As you can imagine you’re on a massive high for 15/16 months but it doesn’t come easy. Straight after Kilkenny’s All Ireland your focus moves straight to club. Physically and mentally it’s a huge challenge for your team. You have to ground your feet very quickly as you know you’re going to be coming up against tough opposition in the club scene.  You’re always trying to get a bit more out of you and the team in every training session & every match. You have to be very careful with the volume of training especially for me, as the risk of injury is always high. A bit of luck goes a long way too!!

ST: Which club player in Kilkenny have you found the most difficult to play against?

ST: You experienced something similar in 2008, where you had a wrist injury and missed the All Ireland, how did you deal with that?

MF: I had a bad wrist injury which I ended up getting surgery on in the middle of that year. I only got back for the last 3/4 training sessions or so and was struggling to strike the ball of my left. I managed to get myself named on the panel but I would of been asking a lot to get a run that day. I think I would have managed it but our first 15 had a perfect performance that day and I think there was only one substitution.

ST: You have a new business with Anthony Cunningham, tell us about that?

MF: Anthony and I have decided to set up a platform to help clubs and coaches match in terms of their needs and wants (job roles). There is a vast amount of qualified coaches coming through our college system and we are hoping to facilitate them, as well as other coaches with job positions in sports clubs. We have nutritionists, Skills coaches, psychologists, managers etc. all ready to support and work with clubs and counties. check out our website for more detail www.coachfinder.club.