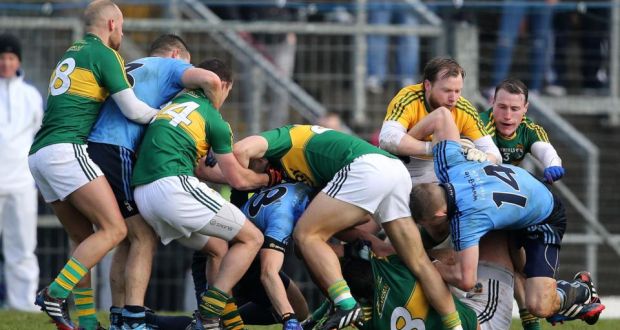 We’ll start with the 70’s. I know this era has been written and talked about to death over the years, but I think it’s worth revisiting briefly, just to get a little context. There was a huge rivalry between the counties during this time. Dublin won 3 All Ireland’s in 4 years, with Kerry winning the one in between. Two excellent teams, clearly the best in the country with some of the legends of the game involved. Dublin won the ’77 semi final, often regarded as one of the best games of all time. Dublin went on to win the final. When it came to the ’78 final, Dublin having won the last 2, they were missing star man Kevin Moran, who was at this stage with Man Utd. Luckily he was given a special dispensation to play and had a week off for the final. Alas during the week he suffered a torn hamstring. Did this stop him? Of course not, he still played and things started very brightly for Dublin’s search for the 3 in a row. But a number of things happened. Paddy Cullen handed the ball to Mikey Sheehy to score one of the most memorable goals of all time. Kerry realised Moran couldn’t really run. Kerry went to town. The result? A 17 point Kerry win and the first of 4 in a row for the Kingdom. And it was also the beginning of a 33 year barren stretch for us poor Dubs.

Transport forward a quarter century or so. I had the fortune, or misfortune, to play against Kerry in the championship 5 times in my career, including one replay. Unfortunately all of those games came within that 33 year barren spell, and we came up short each time. There was 2001’s trip to Tipp for the AI quarter final. Huge excitement playing outside of Croker, massive support, and probably the closest we came to beating the then All Ireland champions, obviously since we drew that first encounter. I still remember Dublin having what we thought was an excellent balance of youth and experience and going into the game confident. We missed a few fabulous goal chances and as I remember it, thanks to a late goal found ourselves with our noses in front coming towards the end. It took a Maurice Fitzgerald wonder point from a sideline to bring us to a replay. We had lost our chance. Only a goal separated the two teams at the end of the replay, but it was enough to knock us out. Incidentally both of Sunday’s managers, Jim Gavin and Eamonn Fitzmaurice, were involved back then, although Jim missed the games due to injury. Next up was 2004, a long run through the qualifiers ended with a 7 point defeat in the quarter final. Once again a lot of promise was shown, not enough though. 2007 was the 2nd closest encounter I experienced against the Kingdom, who were again champions at the time. The crushing 1 point defeat in the semi final against Mayo the previous year was still very much fresh in our minds, and we weren’t going to let that happen again. But what I thought was a magnificent effort just wasn’t magnificent enough, we lost by 2 points. 2009, the last football game I was involved in for Dublin, unfortunately memorable for several other reasons. Most notably the 17 point defeat inflicted on us. The less said about that one the better.

Unlike the 1970’s 17 point loss, 2009’s loss had the opposite effect. Since that game we have now seen a complete reversal of previous trends. Every year I played we were the big underdogs, and with good reason, Kerry had phenomenal teams over those years with fistfuls of medals and experience. It was a small consolation that Kerry ended up winning Sam in 3 out of 4 of those years. To break a trend like that at the very least a massive effort would be required, but also a bit of luck. In 2011 Kerry probably felt in control, 4 points up with the end in sight. But then up stepped Kevin McMenamin, followed by Kevin Nolan and Stephen Cluxton, with 1-2 to win it by a point. Kerry might still be scratching their heads as to how they let Kev Mc through, but then again he’s a very hard man to stop. Likewise in 2013’s semi, the teams level almost in injury time, up steps Kev Mc once again. Was he going for a point or a goal? Was it luck? Only he can answer that, but all I know is that he’s scored too many crucial goals for Dublin for them all to be flukes. Last year’s final didn’t prove to be quite the classic between the counties, that doesn’t matter to the winners though. Dublin held on for a 3 point win in very wet conditions.

Which brings us to Sunday. The momentum has somehow been reversed, with Dublin having the upper hand in recent times, unlike the vast majority of the last 30 odd years. Now it seems Kerry find themselves in the very unusual position of slight underdogs. Of course I can’t see how any of that would bother the Kerry lads. They’ll certainly have no fear on Sunday. Personally I wouldn’t pay any attention to favourites tags, odds or anything like that. If the past few decades has shown us anything, it’s that either county can be found vulnerable no matter the previous year’s results. Quite a few of those games could’ve gone the other way but for one or two incidents, and nothing inspires a big performance from either team than the sight of their big rivals jerseys. Both counties would be seen by many as the two best teams in the country. I don’t really think it’s possible to make claims like that just yet, Mayo still have to have their final say. What is very possible though is that we’ll have another cracker in store for us on Sunday. No inches will be given, no quarter will be asked for, and this very intriguing rivalry will hopefully throw up another contest that will reach the heights of so many others.

I’m sure I couldn’t finish an article like this without at least trying to pick a winner. It’d be very easy to call a draw, that’s how close I think the teams are, notwithstanding recent results. Missing at least two, if not three, all-stars at the back would kill most teams. But I think Dublin’s bench might just see them over the line so I’ll go for a hopeful one point win for the Dubs.