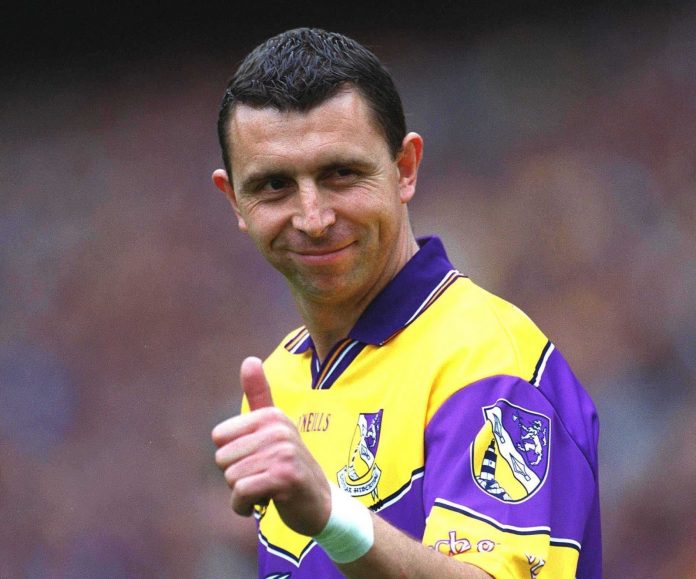 Known as ‘the brother’, it is easy to see why Larry O’Gorman was regarded not only as one of the finest hurlers of his generation, but also a gentleman. The former 1996 hurler of the year and All-Ireland winner was renowned for his aerial abilities and would never allow his opposition any time on the ball. His background was no different from many a hurler. He grew up in Wexford and his love of sport was apparent from a very early age. He said: “I grew up in an estate in the heart of Wexford town, known as Bishopswater. It’s unique in that many people who I ended up playing senior hurling with, came from the area. Any sport on the planet that was offered to us we would give it a go. Many families from the area were quite big and mine was no different. There were 10 in my family and I just knew that hurling was something I wanted to put my time into. Thankfully it worked out well for me.”

Being from a county that is hugely respected in the hurling sphere, it is fair to say that O’Gorman was influenced by many players, before putting on the Wexford jersey for the first time. “Initially, I was inclined to want to follow the older brother around. I would go to every training session and match available. He was a senior hurler with the club, so to be around him left a lasting impression. Having these guys like Ned Buggy, Liam Bennett and Willie Murphy who hurled for Wexford, left me wanting to play for my county. Memories of that great Wexford team who were beaten by Cork in the 1976 final gave me the motivation to practice as much as possible and it helped with my appetite. You just wanted to be one of those players. At the time we didn’t understand the significance of the team winning and how it impacted our area, you just knew it gave people a buzz and we always gave the club players a heroes welcome when they came home for the homecoming,” said O’Gorman.

O’Gorman took huge pride in his club first and foremost. His club Faythe Harriers is where he learnt his trade. The club was well known for producing fine players for the inter-county set-up. He said: “As I have mentioned players like Liam Bennett, Ned Buggy and Willie Murphy were guys that gave everything for their county. They inspired me to work hard and I think that is why I eventually got my chance with Wexford. I believed that they set a standard at our club and you couldn’t help but want to follow in their footsteps. They put you in the right frame of mind and I suppose educated you on what it took to play at such a high level. I guess I was spoiled to know such great players. Outside our club, if you came up against the likes of Buffers Alley with players like Fr Martin Casey, who was as tough as nails or Rathnure who had great guys like Tony and Colm Doran, Jim O’ Connell, Jimmy Holohan and John Conran, you valued Wexford and the talent that was there at county level. It was a great era for Wexford hurling. I remember as a young boy I would run behind the back of the goal and pick up broken hurleys from Tony Doran or Ned Buggy and asked my dad to repair them. I just had a great time and respect for these players.”

O’Gorman developed quite quickly as a hurler and his improvements at club level were being noted. Giving a modest enough viewpoint, he explains how he got into the county set up and what that was like: “The late Pat Murphy and his brother Kevin, who is still alive, were hugely influential in my success as an inter-county hurler. They were the backbone of the club. Jimmy Murphy was another guy who helped me behind the scenes and he would be there for every game and all training sessions. These men nurtured and guided me along the way and for that, I am truly grateful. They always told me to let the ball do the work and be a team player and I suppose I carried that into my Wexford career. The hurley came with me everywhere, so I always felt as though I was destined to be some kind of hurler. I tried handball and boxing but for me, hurling was number one. I suppose the main reason why I made it was because I was individually motivated. I knew I needed to be fitter so I would run on the road, railway tracks or in a quarry. That is why I think I got the opportunity. I tried to improve myself on the field as well as off it. I will never forget playing for Wexford for the first time. We had been beaten in the minor final of 1985 by Cork and then I was lucky enough to get the call to play with the U21s the following year. We were beaten by Galway in the ‘86 final and ‘87 semi-final, but the structure of a great side was there. The likes of Ger Cushe, Billy Byrne and Tom Dempsey. I got the call in 1987 to play with the senior team. That was a truly special moment for me. I made a few appearances in the national league and it was surreal to be wearing the Wexford jersey and being able to train with your heroes.”

O’Gorman would go on to have a fantastic career and would mark great players such as the likes of Cork’s Teddy McCarthy. In 1996 Larry won an All-Ireland, All-Star and hurler of the year. He gives all the plaudits to the manager at the time Liam Griffin: “Liam came in at a time where Wexford was up against a great Kilkenny side in Leinster. He gave us self-belief and promised us that if we put the hard work in, that our rewards would be great. We got over Kilkenny in the opening round of the Leinster championship and from there on we built momentum. Liam explained that it was like climbing a mountain and the All-Ireland was our peak. We beat Dublin in the Leinster semi-final, Offaly in the Leinster final, before getting the better of a fine Galway side in the All-Ireland semi-final. By the time we beat Limerick in the All-Ireland final, we knew that all our sacrifices were worthwhile. The steps we took got us over the line. There was great banter in our dressing room. I honestly think the banter and slagging helped us grow closer as a team. I’ll never forget returning to Wexford after the final and singing our anthem, Dancing at the crossroads. It summarised our togetherness and respect for each other perfectly. Liam Griffin brought that to the table. To see the pride and what it meant to the Wexford people, that’s why you play the game in the first place. Those are the memories you carry with you forever.”

Having such a competitive club scene in Wexford was huge in terms of bringing out the best for the county side of 1996. Today the game has reached new heights in terms of tactics and management plans. O’Gorman’s views on the game are plain and simple. He said: “To be honest back when I was playing you came off after a game battered and bruised. The clash of the ash, that was part and parcel of the game. There was never anything too malicious in my view. It was all for the love of the game. I wouldn’t be in favour of the sin bins now, to be honest about it. I understand the game has gotten a lot like football in that it is a possession-based game. The days of launching the ball are going out of our sport. I would even argue the physicality of the game has gone away to a point. It is almost too tactical. I don’t understand if a player is going through on goal and you foul him, how it is any different to that occurring further out the field. Hurling will never die as long as the GAA don’t mingle around with it too much.”

Under the guidance of Davy Fitzgerald, Wexford have been knocking on the door over the last few years. In 2019 they came very close to reaching an All- Ireland final only to be denied by Tipperary. For Larry it is simple: “For Wexford to finally win another All- Ireland the injection of new ideas and new players is needed. You only have to look at Wexford’s recent record at underage. It is not in the healthiest of places, so for us to win another All- Ireland that needs to be right. If you look at the average age of the current side many of those lads only have a year or two left. So that freshness is badly needed going forward.”

Time to give Joe McDonagh Cup respect it deserves

Waterford’s Derek McGrath Steps Down After 5 Years In Charge