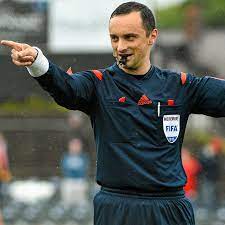 With games on the tv and being live streamed it’s not only teams’ performances that have come in for scrutiny but officiating. I’ve friends who are referees in different sports and I know how tough it is for them. To make a split second decision with all eyes on you must be so hard and if it’s wrong then..
Over the last number of weeks I’ve witnessed some baffling decisions being made by referees and ones that have proven very costly for teams. It’s unfair on teams and also on the match official too.
There are a number of officials that have held their hands up and admitted mistakes; unfortunately after games when nothing can be done and results can’t be changed. Fair play to them for admitting they were wrong.
But I’ve heard of a referee who made snide remarks to a manager after a game a few weeks ago; that sounds more like a refereeing with an agenda. If it was the other way around, the manager would be reported and more than likely fined and suspended.
Referees shouldn’t be the main focus of games. I always say a referee has done a good job if he/she is not mentioned in a match report; well apart from praising their performances. I think if there are no contentious decisions or talking points a referee has done their job well.
Common sense is something that is not used enough in refereeing. A friend of mine who was a referee said to me not enough referees have played the game; that makes a difference. Being able to handle situations tells you a lot about a referee; after all they are the person in the middle, a bit like a judge.
It’s amazing the reaction a referee’s list gets or when you check and see who is refereeing your team. Every fan has a reaction whether it’s good or bad. I think that will never change. I’ve done it myself lots of times.
Over the years I’ve met a lot of referees; a lot of great characters and so different to their persona on the field. Some really surprised me. I think we build up this perception of some referees. They are human after all. They deserve respect but criticised constructively, if needs be.
I’ve found myself at times asking the question “who’d want to be a referee?” It would be nice to some time be able to say “who wouldn’t want to be a referee?” Maybe we can all work together to make that possible.
On the field of play last weekend Derry City, Waterford and Dundalk picked up big wins and it leaves things tight at the bottom of the Premier Division. St. Pat’s and Shamrock Rovers lead the way at the top. My own team Longford Town are away to St. Pat’s tomorrow (Friday). I look forward to seeing the Inchicore side play. Town were poor last weekend in Waterford and I’d love to see them put in a good performance.
Derry will be hoping to pick up another win under new manager Ruaidhri Higgins when they travel to Dalymount Park to take on Bohemians. Finn Harps have had a bit of a blip of late but will hope to get something when they entertain leaders Shamrock Rovers at Finn Park.
In the First Division Athlone Town lead the way but Shelbourne are close behind. Treaty Utd have been terrific and got a great result last weekend with a win over their Munster rivals Cork City.
Looking at the table it’s mad to see Cork City and Galway Utd down near the bottom. Galway were many people’s favourites to win the First Division and are 10 points behind Athlone. They’ll want to pick up points soon.
Athlone Town and Cabinteely is the big game in the division this weekend, though Shelbouren and Treaty Utd looks tasty too.