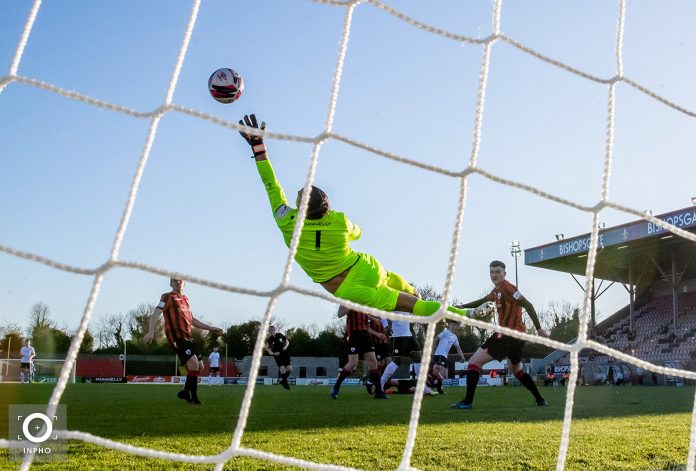 Since the return of the League of Ireland the one thing I’ve noticed is the quality of goalkeeping. The league has always had great keepers but in the last couple of weeks some of the netminding has been top notch.
I’ll mention my own club’s keeper, Lee Steacy. Two weeks ago Longford Town played Bohemians in Dalymount Park and were 2-0 down going in at the break. The scoreline could’ve been a lot worse for the Town only for a number of excellent saves from Steacy.
Last week against Sligo Rovers he pulled off a superb save to deny young Johnny Kenny. Just look at the picture and see for yourself how good it was.
When I came home from the Town game last Friday I watched Shamrock Rovers and Dundalk. Goalkeeper Alan Mannus proved why he is so important to Rovers with some superb saves.
They say you have to be mad to be a keeper. Maybe that’s why I was one. You are the last line of defence and a lot of the time are under scrutiny.
Goalkeeping has evolved over the years. It is an art in itself. Distribution is one thing that is big in the game now. From kicking to throwing, distributing the ball is so important for a team’s attack. A keeper has to read the game so well. It’s about being technical and tactical too.
Keepers need to be right mentally as well as physically. Intelligence also plays a huge part. It is a challenging role and you need a good strength of character to stand between the posts. It is an unforgiving position and for me it is the toughest.
We had another interesting weekend of games. Town were beaten by Sligo and can feel aggrieved that they didn’t get something out of the game. I won’t talk about some decisions that went against the home side. It is frustrating. Sligo are a good and well organised side.
Shamrock Rovers beat Dundalk thanks to Alan Mannus’ goalkeeping. It was a tale of two keepers as Dundalk’s Alessio Abibi, who was their hero in the President’s Cup Final, should’ve done better with Dylan Watts’ strike.
Elsewhere Waterford got their first win of the season away to Derry City, St. Pat’s had a double derby win over Bohemians and Harps drew with Drogheda Utd.
The big result of the weekend came in Athlone and, apart from maybe Athlone keeper Adrian Carberry and his team, not many saw the result coming. Athlone were full value for their win over First Division title favourites Galway Utd.
Athlone came from behind the week before to draw against UCD and now this result. It will definitely have them buoyed up. Cabinteely sit top of the table and with Collie O’Neill in as part of their management team, they have one of the best in the league. His former team UCD have started well too.
I said the First Division was going to be tight this season and the first two rounds of games have proven that. There is a long way to go but there will be lots of twists and turns and I’m really looking forward to it.