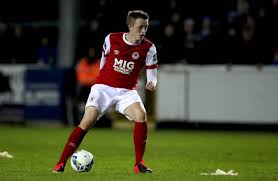 The first series of games are over in the Premier Division and it has been an entertaining opening round. Shamrock Rovers lead the way at the top while down at the bottom it’s Waterford.
I’ve been lucky that I’ve seen every team play ‘live’. I find it’s way better to go to games than watch them on television; you can see far more. The talent that has been on show this year makes for an exciting season.
So much has been made about Graham Burke and I mentioned him a few weeks ago. Last week I covered St. Pat’s and Longford Town and was just enthralled my Chris Forrester. League of Ireland fans know what a talent he is.
He played across the water but returned two years ago; for personal problems. With Longford Town playing in the First Division last season I didn’t get to see much of Forrester. Although he scored twice against Town on Friday evening I couldn’t help applauding him. His two goals were terrific; different techniques for both.
It took Pat’s and Forrester a while to get into the game and I have to say Town’s first half performance was probably one of their best this season. When the Pat’s captain got going you knew he was going to lead by example.
At one stage in the game he chased after a ball, won it and for a few moments you’d swear the ball was stuck to his foot. Such a gifted player and I for one am delighted he’s one of our own and plays in our league.
Ronan Coughlan came on as sub for Pat’s on Friday and I was impressed with him too. You look around the league and there are some fantastic players. We need to sell our league better. Let people in Ireland know about these players and let supporters have new heroes on their own doorstep.
On Monday evening Shamrock Rovers set a new League of Ireland record when they went 31 games unbeaten with a 3-0 win over Waterford. An unbelievable achievement for the club. They haven’t tasted defeat since 2019. They face their great rivals St. Pat’s on Saturday and the Inchicore side would like to bring them back down to earth.
Longford Town were chasing a record of their own on Monday; their first win over Dundalk since 1999. Town were 2-0 up after 15 minutes but credit to Dundalk they came back into the game and their captain Chris Shields scored the equaliser in the 81st minute. I’d have take a point before the game and yet at the end was disappointed we didn’t hold on for a memorable win. The joys of supporting De Town.
Another record was broken in Derry Monday when Finn Harps beat their Derry City for the first time at the Brandywell. Of course Harps manager Ollie Horgan didn’t care much about records and was just delighted with the win. That’s why I love the man. He just says it out.
In the First Division Athlone Town fell to their first defeat of the season when Cabinteely claimed the win in the Midlands. Galway Utd recorded a much needed win while Treaty Utd keep on surprising people; they drew with Shelbourne. The big game this weekend is on Friday night when Shelbourne entertain Athlone Town at Tolka Park.

IRFU apologise for handling of women’s game but no report will...