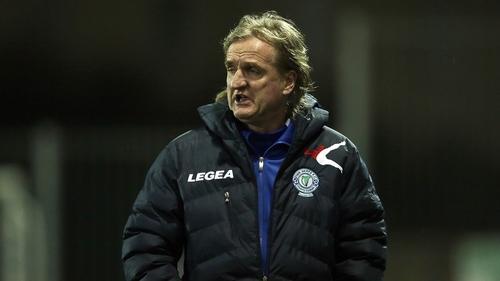 With two games played in the Premier Division the top of the table makes for interesting viewing. Finn Harps are top with Longford Town second. As a Town fan I’m delighted with the start they have made to the season with a win over Derry City and a draw away to Bohemians; coming from 2-0 down. I’m also a realist and know there is a long way to go in the season and every point is so important.
Harps are top following wins over Bohemians and Dundalk. Their win over Dundalk last Friday was the first since 2007 and their first at Oriel Park since 2006.
The man in charge of Finn Harps is the affable Ollie Horgan. The Galway man was appointed manager in 2013. Last season they were favourites to go down but a great run of results near the end saw Harps consolidate their place in the Premier Division for another season.
With Horgan, Finn Harps are punching above their weight. What I love about him is his honesty. There is no bullshit with him. He says it as he sees it, along with some memorable cliches thrown in for good measure.
He is popular with journalists and supporters alike. I know many opposition supporters who hold Horgan in high regard. It’s people like him that make our league special. I hope he and Harps keep entertaining us this season (except when they play De Town).
I was going to flick between the rugby and the Waterford v Sligo game last Friday but decided to stick with the game from the RSC. Two stunning goals from Romeo Parkes and Jordan Gibson saw Sligo come from behind to defeat Waterford. Sligo come to Bishopsgate tomorrow evening (Friday) to play Longford Town and I’m looking forward to what should be a good game.
Because of the Town game I won’t get to see the start of the Shamrock Rovers v Dundalk game. These two clubs have built up a good rivalry in decent years. Rovers have played 1 game and have 1 point while Dundalk themselves have 1 point from two games. It should be an intriguing battle.
It will be interesting to see how Dundalk respond from last week’s result. So much has been made about their off field situation. The club appears to be fractured and it could take a while for it to heal.
It’s only week 3 but some interesting games in the other fixtures including a Dublin derby at Dalymount on Saturday evening between Bohs and St. Pat’s.
The First Division started last weekend and results show how tight the race for the title and play-off spots will be. I had hoped that there would be no glitches with the new LOITV but from social media comments, a lot of work needs to be done in improving the service for supporters.
Some tasty fixtures this weekend in the First Division including the meeting of Athlone Town and Galway Utd. Both sides picked up a point in their games last weekend while two sides hoping to push for promotion clash in Tolka Park on Friday evening with Shelbourne hosting Bray Wanderers.