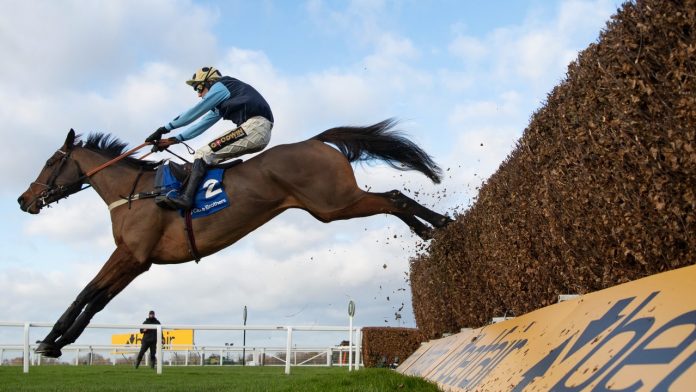 rkle Chase winner Edwardstone could bid for this third top level success of the season at Aintree next month.
The Cheltenham win was trainer Alan King’s first festival winner in seven years. King is hoping to enter the horse into the Maghull Novices’ Chase on Grand National day.
Speaking in this Racing Post Weekender column King said: “Edwardstone has come out of the race fine and if he remains in good form I’d love to go to Aintree with him.
“He’s only a novice for one more run and I don’t want to send him to Punchestown. There’s no reason why he couldn’t run another very big race in the two-mile novice at Liverpool, which Voy Por Ustedes finished second in after winning the Arkle for us in 2006.
“But we’ll have to see how he is nearer the time and give him every chance to tell me if he wants to go there.”
Edwardstone was the 5 to 2 favourite for the Arkle and only one of four Grade 1 British winners at Cheltenham. King said: “He was fabulous. Although there was a bit of a scare at the fourth, he was very clever to sidestep the faller and he was excellent after that. I couldn’t have asked for any more from him. Considering it was a championship race, it was very smooth.
“But that’s not to say that watching it live was a pleasant experience! With all the pressure, I couldn’t relax until he got over the last fence – but I did enjoy watching the replay!”