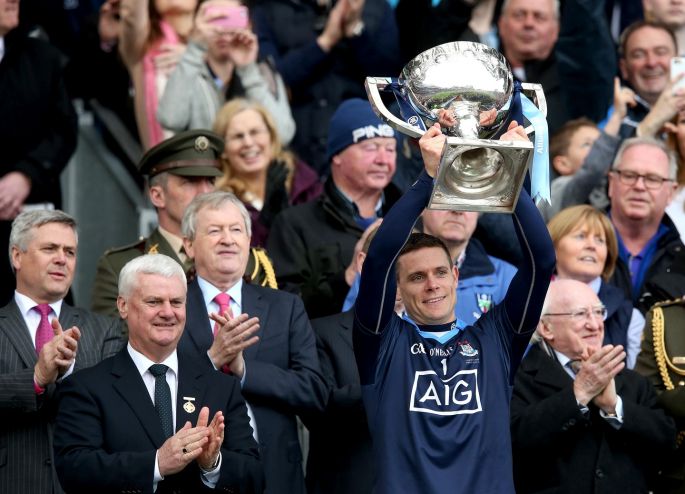 The marquee game that the Croke Park authorities would have been crying out for to liven up the early stages of the league. Tyrone’s recent record against Dublin hasn’t been great (neither has anyone else’s) but they’re still one of the few teams you would give a chance to succeeding against them come Summer time. They comfortably dispatched Roscommon in their opening league fixture last week, although they will be missing their All-Star midfielder Mattie Donnelly for this game.

Dublin are still missing the likes of Diarmuid Connolly to St Vincent’s club All-Ireland run, and Bernard Brogan and Paul Flynn were absent the last day, but it’s a sign of their strength in depth that you would hardly notice. Having been unbeaten in their last 30 league matches would you bet on them to lose now? I thought not.

The Kingdom got their first opening day win in the League in 5 years against Donegal last week and are obviously focusing on a strong Spring as a building block for the summer. Their influential defender Shane Enright was injured in the victory and they are still without the firepower of Kieran Donaghy and Colm Cooper, but in Paul Geaney they have one of the form forwards in the country at the moment and a very promising youngster in Jack Savage.

Mayo will have been very disappointed to have been beaten on home turf in their opening league fixture against Monaghan. They still have enough quality in their ranks to trouble Kerry and have unearthed a few newcomers in Donie Newcombe and Fergal Boland, but you feel they need more firepower if they are to win away this week and, indeed, challenge later in the year.

Donegal will have been disappointed, not just by the fact that they were beaten against Kerry at home, but because they never looked like winning in the first place. On saying that, they do have the likes of Paddy McBrearty and Michael Murphy who can turn the game at the drop of the hat.

Roscommon didn’t disgrace themselves despite the defeat to Tyrone last week and have made two changes for this week’s fixture with John McManus and Shane Killoran replacing Ultan Harney and David Murray. They’re playing at the newly developed Hyde Park for the first time in a year and that extra bit of motivation might see them prevail.

This fixture is always a hard fought derby but it will be given extra spice this weekend by the fact it will be their first top flight clash in almost half a century. Cavan will be disappointed with the result of their opening round fixture against the Dubs, but they will know that they matched their illustrious opponents for a lot of the contest.

Monaghan on the other hand scored a superb away win against Mayo, and have one of the best forwards in the country in Conor McManus. Home advantage may tip this one in their favour.

Clare may have had one of the most  impressive results last weekend when they managed to emerge from Celtic Park in Derry with a draw. Their star player Gary Brennan played for Ballyea in the All-Ireland club semi-final the day before, but it’s a sign of his dedication to the banner cause that he was still willing to turn out for the footballers the next day.

On the other hand, Down were pitiful in their opening league outing against Fermanagh. Their luck is unlikely to get any better here.

Fermanagh were mightily impressive in defeating Down away last week. Galway just about managed a draw against Cork at home. Influential midfielder Fintan O’Curraoin returns for the tribesmen, but given the Ernesiders greater form, and home advantage, they look most likely this weekend.

The extent to which you fancy Kildare in this game probably depends on how you view their opening match against Meath. The Lillywhites were good, but the Royals were awful. Cork managed to scramble a draw away against Galway. This will be an acid test for the Lillywhites but, given their current form, they will fancy their chances.

Meath massively underperformed in their first round drubbing by Kildare on home soil. Simultaneously, Derry just about  scrambled a draw against Clare.

On form, Derry look slightly the better choice but perhaps the shame of last weeks defeat will Galvanise Andy McEntee’s troops? For their own sake, you would hope so.

Louth scored one of the biggest upsets of the opening round when they dispatched Laois at O’Moore Park. Maybe the victory wasn’t the biggest surprise in the world, but the scale of it (a 13 point defeat) certainly was. They will be cock a hoop going into this fixture against a Longford team.

Longford were also impressive in overcoming Offaly last week. This provides an intriguing prelude to their championship encounter come the summer but given Louth’s greater form they may have an edge.

Tipperary were comfortable in defeating Antrim last week. On saying that, the low attendance the game would suggest that football fever from last year’s escapades has not quite caught on in the Premier county. Still and all, with the likes of Michael Quinlivan and Conor Sweeney in their side they should have enough to beat Sligo who failed to register a home victory over Armagh.

Two teams that were defeated last week and neither have the greatest prospects going into this year. Offaly will see this game as a chance to get back on track seeing as they are on home soil and that may be just about enough for them.

Armagh have flattered to deceive somewhat in Kieran McGeeney’s managerial tenure thus far. On saying that they do have quality in the ranks and they did well to get an away draw against Sligo last week. The likes of Jamie Clarke, although currently absent, will be a massive addition to their ranks this year.

On the other hand, Laois were pitiful in their opening defeat against Louth at home. Given their current woes and the fact they’re making a big journey, you would have to pluck for the Orchard men.

Carlow showed an admirable spirit to snatch a point away from home against Westmeath last week. It was a point very much against the odds and they will like their chances against one of the league’s perennial strugglers.

London meanwhile, were disappointing in the second half against Waterford. Their success always seems partially dependent on the Irish economy. The better Ireland is performing, the worse London doo! Given the upward trajectory Carlow appear to be on you would fancy them.

Westmeath will have been disappointed to have been pegged back in the last few minutes against Carlow last week. They have made 3 changes for this week’s game with Mark McCallon, Denis Corroon and Kieran Martin coming in for Stephen Corcoran, Cormac Boyle and Luke Loughlin.

Limerick were defeated in their opening game last week against Wexford but they will be encouraged by the fact they put it up to one of their main promotion rivals. They seem stronger here.

These two sides were two of the most impressive in the opening weekend with Leitrim hammering Wicklow in Aughrim while Wexford scraped past a determined Limerick at home. Given their form, this could be a promotion decider at an early stage.

John O’Mahony, who guided Leitrim to their last Connacht success in 1994 has been playing a role in the sides preparation. Given the current buzz surrounding them they may edge this one.

Wicklow will have been disappointed by the scale of their defeat against Leitrim last week. Waterford meanwhile had an easy enough victory over London. Given the exiles lack of preparation that may not be an accurate barometer of their true level, but they should have enough in the tank to see off the garden men.