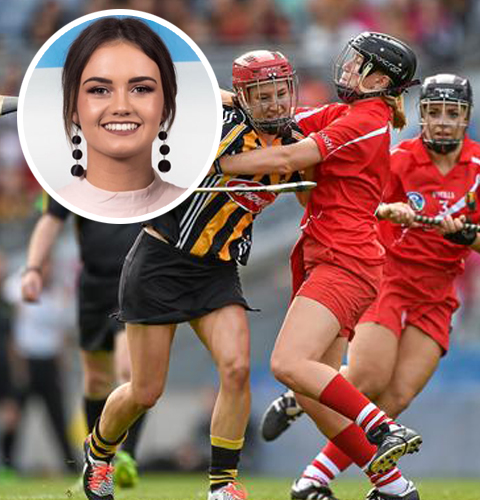 This Sunday the spotlight will be on both league finals at Nowlan Park, indeed many GAA fans will be riled up and on a hurling buzz after last weekends mens semi finals, but we believe the camogie final beforehand has the potential to steal the show.

First of all Ann Marie congratulations on becoming PRO of the year and your gig as sideline reporter with AIB GAA for the live streaming of the recent club finals.

Ann Marie it’s a special day for Camogie once again on the bill along with the mens final.

“Yes, for Kilkenny the day will be very special! Having the men and women in a final Kilkenny will be buzzing in the lead up. Last year was the first year the league finals for hurling and camogie were paired and it’s a brilliant move by the Camoige Association  and GAA.”

Tell us who’s in form from both sides at the minute and who will be the biggest threats.

“Julia White and Amy O Connor have been exceptional for Cork throughout the league. Julia being the hero for Cork last year in the All-Ireland final has worked her way into the starting team. She has a massive engine that can go all day up and down the field. Cork are still without Gemma meaning Ashling Thompson will sit at centre back.”

“Kilkenny’s Shelly Farrell is lightening quick! She is brilliant at finding the net. Anne Dalton has moved slightly up the field from her sweeping full back role which means she sets up a lot of scores for Kilkenny with her deadly accurate passing.”

We mentioned in a previous article that all the pressure was on Kilkenny, was that a little naive of us to think… what’s your thoughts,

” A lot of pressure is on Kilkenny coming into this game. Playing Cork after last year’s final it’s a chance to get revenge, but we know how much Cork love winning. I don’t think playing in their back yard will add pressure. I think it will give them a massive boost. There is pressure on Cork also, they will have to get one over on Kilkenny at this early stage to be confident meeting them later in the year.”

How do you see it going?

“I predict a low scoring game. Cork have tried and tested lots of options coming into this game. So if plan a fails, Cork will change up their game plan quickly and Kilkenny will have to adapt. Galway pushed Kilkenny all the way in their semi-final however I expected a Cork win by the narrowest of margins.”

Don’t forget you can catch the game on TG4 from 1:30pm and tune into Sportstalk’s twitter page for live tweets and match reaction afterwards.