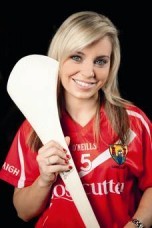 4 time All Star winner, Anna Geary, gives her insight into this weekends camogie matches. Kilkenny take on Offaly in Nenagh while Wexford take on Tipperary in Waterford. Both matches kick of on Saturday at 2:30pm

This is the business end of the season. No safety net. It’s knockout time. This is the time of the season that gets the adrenaline pumping within players. They have trained since January for the battles that lay before them on Saturday. The 4 teams will contest for the remaining coveted places in the All- Ireland Semi Finals on the 13th August. To make it to the last 4 is special, but this year there is a little more at stake, as for the first time ever in the Camogie Associations history, the Senior All Ireland Semi Finals will be broadcast live on RTE. That should add bite to the matches. They will all want to be a part of history. This will have sponsors sitting up and taking notice and it will mean that more people than ever can tune into the Camogie action.

Offaly have won 4 of their 5 group games and may feel unlucky to have been pitted against the National League Champions, Kilkenny. However, under the new management of Adrian Clancy they will not fear the Cats. They have already caused the upset of the Championship in comfortably disposing of Wexford in the group stages. In recent years the Leinster Championship has also given Offaly the opportunity to close the gap on Kilkenny.

With Tina Hannon and Arlene Watkins identified as Offaly’s main goal scoring threats, they will have to settle early and raise to green flag against the black and amber jersey if Offaly are to move forward.  Kilkenny will still be nursing their wounds after crashing out against Cork at last year’s semis final stages. Winning the league is only a stepping stone and with the famous Downey sisters now at the helm they will have their sights set on a home game in Nolan Park on 13th August. Ann Dalton is an ace in their pack and allowing her to fulfil more of a play-making role might be key to Kilkenny getting into an early rhythm. Sometimes her true impact is lost waiting for the ball inside. Both Denise Gaule (Kilkenny) and Michaela Morkan (Offaly) are on this season’s ‘highest scorers’ list and both teams will look to these players for scoring inspiration. I expect Kilkenny to have the edge on Offaly, but Offaly won’t go down without a fight.

Wexford are the only team in this year’s Championship to have beaten the current All- Ireland Champions, Cork. That win will have given the team a huge boost after easily succumbing to Offaly in one of the earlier rounds. Wexford have the highest goal scoring record of any team, blasting to the net 15 times in 5 games. Una Lacey claims the credit for 7 of those, closely followed by Wexford’s reliable stalwart Kate Kelly with a tally of 5.

Both of those players will have to be well marshalled by Tipperary from the throw in. With Mary Lacey back in her usual berth of No 6 having missed the opening 2 rounds with Wexford, she will be pivotal in launching Wexford’s attack. Wexford will need to spread the scoring responsibility and I expect the likes of Katrina Parrock to come to the fore tomorrow. Tipperary are a young side and feature some of this year’s All Ireland winning minor side. As a collective, while they may be lacking in experience they are not lacking in leaders with Sabrina Larkin, Mary Ryan and the Fryday’s coming to mind. It’s bizarre to think that Tipperary find themselves in the quarter finals having only won 1 game in their group. Tipperary have failed to make it to the semi finals for a number of years and despite their improvement, at the moment I think it’s still a step too far against a hungry Wexford team.

Both quarter finals are on at 2.30pm with Wexford taking on Tipperary in Walsh Park, Waterford while Kilkenny clash with Offaly in MacDonagh Park, Nenagh, Co. Tipperary. The sun is meant to shine tomorrow. Throw on the sun factor and spend the afternoon outside supporting these teams.

Cork Star Orla Finn “TG4 have done so much for Ladies...