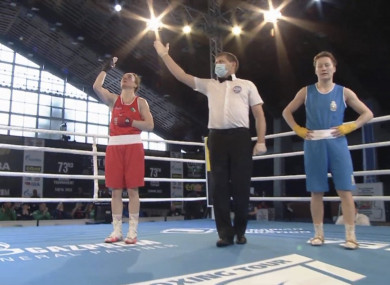 Kellie Harrington has added another gold to her collection as she defeated Serbian opponent Natalia Shadrina in the Lightweight Final at the 73rd International Strandja Tournament in Sofia.
The Olympic champion withstood a tough fight from her brave opponent, and won on all five judges’ scorecards; three gave the fight to the Dubliner 29-28 while the other two gave it 30-27.
The 26 year old won on unanimous decision in all four of her bouts on her way to the final.
The last time Harrington fought in Strandja there was controversy as she lost to Mira Potkonen from Finland.
Only the top boxing countries are invited to take part in the tournament. Roscommon’s Aoife O’Rourke fights in the Middleweight Final this evening. She will fight Atheyna Bylon from Panama.