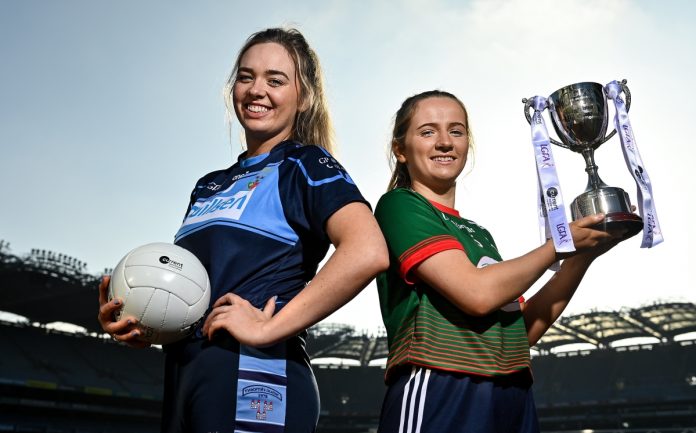 For St. Jude’s captain Aoife Keyes, leading her side out on the pitch for Saturday’s All-Ireland Junior Football Club Final is amazing but the ultimate would be to lead her side to victory over Tipperary side Mullinahone.
Keyes said: “Even just being on the team, playing against some of the players on our squad is just a privilege completely. To be able to say I’m the captain is even better but there’s so many leaders on that team that make my job easy. From 1 to 30. There are girls on that team who’ve a lot more experience than I have. I value their opinions and take it onboard. Being able to lead them out on the pitch Saturday, would be amazing. And if we get to lift that trophy it’ll be amazing as well.”
Jude’s secured a place in the All-Ireland final 24 hours before Mullinahone so Keyes was able to watch the Tipperary side’s game against Galway champions St. Brendan’s. She said: “I actually watched the match on Sunday after our own match. They’re a great team. It’ll be a tough match. I feel like anyone that is down to this stage is going to be tough. Look it’s final, anything can happen on a final so fingers crossed we can push through.”
Both sides are quite similar with a number of dual players. Keyes said Jude’s won’t focus too much on the opposition. For the Dublin side it’s all about getting their game plan right. Keyes said: “You can kinda play your own game which definitely helps. It’s kinda strange because it nearly always takes the nerves away, a bit, because you don’t really know what you are going into. Sometimes when you know there’s a certain player, certain way that they can play; it can almost make it worse. Our back team are brilliant and they do a lot of the hard work for us. They go through hours of footage; not just our matches but other matches as well. They kinda give us all the information we need.”
Keyes was in her late teens when she started playing football. But the team have been together for over 10 years. She said: “I only started at age 19. I was late coming to the sport. I was more into athletics at the time; from the age of like 4 to 18. When I stopped that my family kinda were like ‘well it’s time to pick up the football’. The ladies team have been going way before I was even involved. I’ve two younger sisters who are very good footballers; they were coming through the ranks, for a while, then mum was a coach, as well. The team has been going 10/15 years.”
The Jude’s captain was quick to credit manager Jeff Kane for getting to the All-Ireland. He helped them get over losing the county final in 2020. Keyes said; “Jeff is great. Jeff has really brought us through from losing the county final last year. He’s always threatening it’s going to be his last year but I think it’s be a tough year for him to leave now, after all this. Jeff has been in the club for years. I think my granda coached him back in the day. That’s Jude’s for you everyone knows one of us or someone’s family is involved in someway or shape or form. It’s brilliant.”
Two Dublin sides have claimed the All-Ireland Junior title; Jude’s neighbours Thomas Davis and Rush side St. Maur’s. Keyes would like Jude’s to be the third but admitted it was something they didn’t think about at the start of the campaign. “You can’t let yourself think about it because it just is something, I think I said this before you don’t really ever start the season being like ‘yeah we’re going to win an All-Ireland final’ especially since we’ve never really been past Dublin. If we get our name on that trophy it would be unbelievable. St Maur’s won it 2/3 years ago so if we can replicate that for Dublin it’ll be amazing.”
It has been a long campaign for Keyes and Jude’s. They’ve been training hard but she’s enjoying it. She said: “We’ve been training individually, I’d say, for a year because we had it set up quite well during covid that we had certain groups and we were doing fitness tests by ourselves and sending in our times. It has been a long year but to be honest it’s definitely worth it. Like even over Christmas we were still training because we had that quarter-final.”
Keyes juggles football with her job with Paddy Power Betfair. She acknowledges how lucky she has been with her job and the football compared to others on the team. “I’m quite lucky, I get to work from home so that’s definitely helped. I know some of the girls who are frontline workers, it’s been very difficult. The perks of working from home just being able to go out do your own session in the morning or even during lunch; definitely has helped in that sense. The coaches have been very understanding of all of us if we had other commitments, especially the girls that play county,” said the Jude’s captain