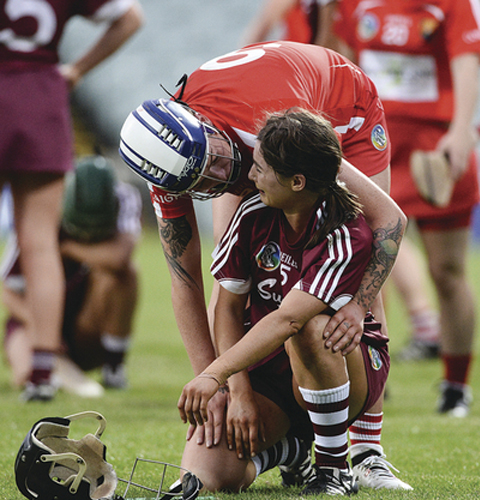 Cork were just after defeating Galway by 2-09 to 1-09 to book their place in the All-Ireland Final and Thompson could’ve easily just celebrated with her team-mates but instead went straight to Donoghue to comfort her.

Thompson herself has known the pain of losing such an important game; Cork were dethroned last year in the All-Ireland Final by Kilkenny. Speaking on this week’s SportsGirls podcast Jane Moore was full of praise for the Cork star and her fantastic gesture.

“She’s great role model for young kids. It was good to see because she went through the loss of the All-Ireland Final last year, Munster Final this year. It’s those days that make you realise wow I am lucky to be going through this All-Ireland semi-final while Galway are going home and that’s their year ended.”

Moore went on to comment on the respect that is shown in Camogie and it’s something that is fantastic to see. She believes Thompson is a great ambassador for the game, especially with this act of sportsmanship:

“It’s super to see. There is loads of respect in Camogie, everyone always shakes hands; there’s no ifs or buts. It was great to see, she’s a great role model. She’s a great ambassador for the game and it’s just small things like that”