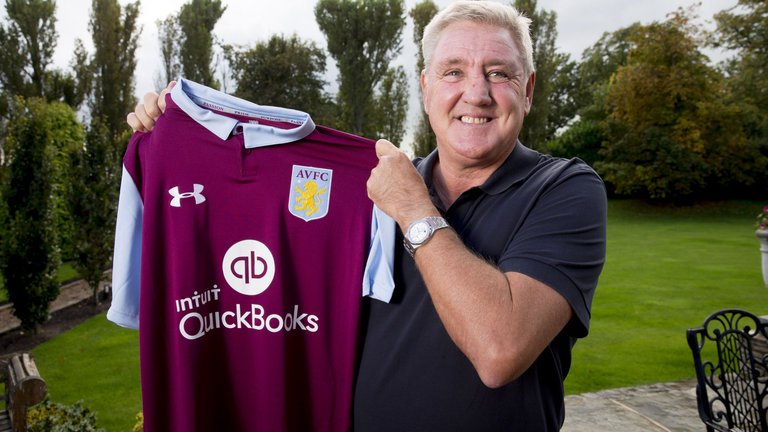 Aston Villa’s demise and can Steve Bruce save them?

It has been nearly six and a half years since Martin O’Neill led Aston Villa to their third successive 6th place finish in the premier league. Hardly memories that Villa fans will cherish to their death bed, especially given their history of a European cup along with other smatterings of relatively recent success (mainly from the 80s to mid-90s), but something they would give an arm and a leg for right now. Those six and a half years were filled with risky and ultimately poor decisions by the hated Aston Villa ownership of Randy Lerner and co, despised in the same manner as their American counterparts Tom Hicks and George Gillett were, and will remain to be at Liverpool. All three have since departed their respective clubs, though the gap between the two clubs grows greater by the day. Tony Xia has taken the reigns at Villa and after his first managerial casualty in Roberto Di Matteo, has entrusted Steve Bruce with the unenviable job that it looks to be. The question is can Bruce save Villa from becoming yet another club to drop down from the top division seemingly unable to escape the obscurity of middling football league clubs?

As those involved with most notably Wigan, Wolves and Leeds can attest, the premier leagues famous parachute payments don’t always slow down the catastrophic dissent into a double relegation. Given the disastrous situation of having uninterested players happy to see out their premier league contracts with premier league wages while the club slips further and further toward league it really is imperative to have a manager which suits the league you find yourself in. Given the situation they now find themselves in and his record of managing similar clubs it is remarkable that Bruce’s appointment has been met by any resistance from fans. Granted his Birmingham City past, something which spelled the end for Alex McLeish before it had begun, was cited by some as a reason to look at other options. Realistically though the former Hull boss was their only sensible choice. The only other manager with a proven track record of promoting championship clubs who was free is presumably in his Villa in Spain nursing a point of wine with a sincere lack of interest in returning to the football world.

Like O’Neill, who resigned in 2010 from Villa, Bruce left Hull due to the difficult relationship he had with owner Assem Allam. Mainly over player transfers, or lack thereof. Very much unlike O’Neill however is Bruce’s past as an author of murder detective fiction stories. Three titles were released all going down as well as Jack Grealish’s decision to play for England did here in Ireland with critics. If he manages to solve the mystery of their teams continuing slide down the leagues expect sales to increase in the Birmingham area, for purely sentimental reasons at least. Again it wouldn’t take his books alter ego Steve Barnes manager/detective at “leddersfield town” to figure out who most people blame for his new club’s recent demise.

Randy Lerner completed his £62 million takeover from Doug Ellis at the start of the 06/07 season a move that was met with great expectation from fans given Ellis’s previous reluctance to back managers in the transfer market. Lerner arrived promising to invest heavily in the squad and over the first 3 years stuck true to his word. Close to £200m was spent in those seasons which ended in 6th place finishes along with a league cup final in O’Neill’s last season. Clearly these were not the results Lerner had expected for his outlaw and he became worried at Villa’s spiraling wage Bill which saw many Squad members earning nearly £40,000 a week. Charles n’Zogbia anyone? O’Neill in

turn thought his position was being undermined and after he was refused Stephen Ireland as a makeweight in the deal that saw James Milner move to Manchester City he quit just 5 days before the new 10/11 season. Thus beginning a disastrous period involving 10 caretaker and permanent managers each unable to slow the decline.

Gerard Houllier arrived and managed to sign Darren Bent whose goals kept them barely above water, but was soon out the door aware that the club’s management was not one which would ever bread success. This was further emphasized given Lerner’s next appointment in Alex McLeish. A hated figure given he came directly from their hated rivals but also strange given his recent relegation with said rivals. His playing style was as forgiving as his temperament and his time was doomed from the start. Another Scotsman arrived with a promising cv. Paul Lambert had done a commendable job at Norwich City, but such was the poison chalice of the Aston Villa hot seat over the following two and a half years had any ounce of promise well and truly drained.

Severe lack of action in the transfer market could easily be blamed for the debacle in largely turned into, even our very own Roy Keane managed to ruffle a few feathers questioning many of the player’s motivations, which inevitably proved to be true. Then came the biggest spoofer in football since ole Harry of the Redknapps in the shape of Tim Sherwood. Credit where credit is due he got his side to an F.A Cup final and duly earned the trust of Lerner who perceived him to be, finally the right man for the job. He was backed heavily in that summer’s transfer market and although he blames (true to his character) the transfer committee all the signings turned out to be duds, and so did Sherwood. Gone before Christmas to be replaced by an equally as strange choice in Remi Garde. A manager with no Premier League experience, let alone of a relegation dogfight. Alas there was no dogfight merely a whimper as they finished with a miserable 10 points. Now Di Matteo has failed Bruce should arrive with total faith from fans and board alike.

One bright spot for Villa fans may be the new ownership of Chinese businessman Tony Xia. It will take a longer period than his first six months to figure out whether he is of the ilk of say, Leicester City’s owners in letting managers get on with their job without interference, or more like Bruce’s former employer Allam. Seeing as though Bruce held talks and it proceeded in him accepting the job, along with Xia’s backing in the transfer market in the summer and also giving Di Matteo plenty of time to turn things around Villa fans will hope he is more like the former. He does however expect promotion from his new boss and tweeting so just two days after his appointment, always a worrying sign. Xia’s attitude to Bruce if he indeed fails at his first attempt will tell a lot in terms of whether there is any discernible change in the attitude which plagued Villa during Lerner’s time in charge.

Clubs such as Fulham, Blackburn and Nottingham Forest, as well as the three mentioned earlier have chopped and changed managers at a steady pace since dropping down, all to no avail. In Bruce they have a manager who by no means will return them to the glory days of the 80s but I think most of his new team’s supporters would settle for a stabilizing, calming influence followed by a steady move back up the table possibly for a run at the playoffs. It won’t be pretty or revolutionary from Bruce but with players of genuine quality like Ross McCormack and Jordan Ayew he has the makings an entertaining team. Who knows maybe he can recapture some of that investigatory past and figure out who is murdering Jack Grealish’s career.