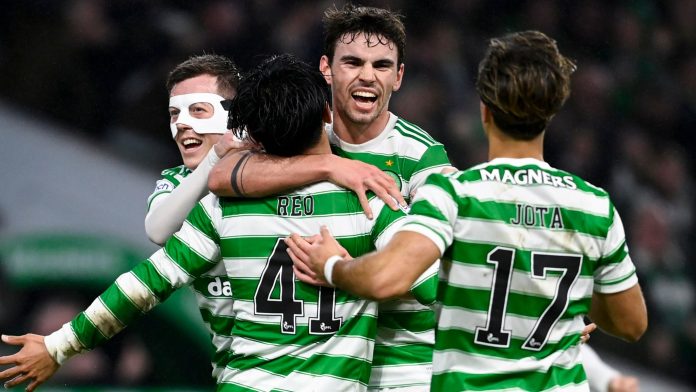 Celtic and Rangers will have away supporters at the remaining two Glasgow Derby fixtures this season.
That means that Celtic supporters will be in Ibrox for the clash on April 3rd while Rangers fans will be in Celtic Park for their final derby game; the date will be decided after the SPL split.
Speaking to Sky Sports Rangers Managing Director Stewart Robertson said: “There will be away allocation for the next two games. Because of the Covid situation we had back in August the two clubs got together and agreed we wouldn’t have away fans, because we had red zones we weren’t sure what the Covid situation was going to be for that period of time.”
The banning of away supporters came after Rangers decided to reduce Celtic’s allocation to just 700 supporters for the first derby game last August. Celtic didn’t give a guarantee on how many away supporters would be allowed at the next game at Celtic Park so Rangers decided to put a complete ban on Celtic supporters.
Rangers won the first derby game 1-0 while Celtic were 3-0 winners at Celtic Park at the beginning of February. Celtic are currently top of the SPL, just one point ahead of their Glasgow rivals.
Robertson admitted that they will revert back to allocations of years gone by, meaning about 7,000 Celtic supporters will be at the Govan venue in April.
He said: “There will be away fans for the two games remaining. It will be the allocation we’ve had for the last couple of years. Going into next year, and the succeeding years after that, as far as I can see it will still be at that level. I don’t think that’s underselling the game, I can see why some might think that. From my perspective, a lot of the excitement is what happens on the pitch between Rangers and Celtic. I’m comfortable with where we are in terms of the away fans allocation.”