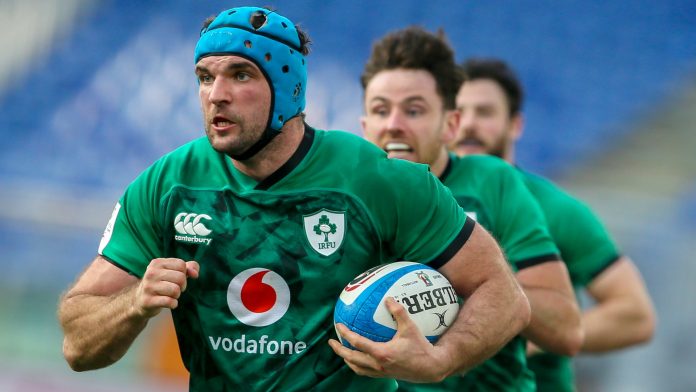 Tadhg Beirne has signed a new three year contract with the IRFU. The deal will see him remain in Ireland until 2025.
Beirne follows Andrew Porter in stepping up to an IRFU central contract. Having been released by Leinster, Beirne made his name at Scarlets and he played an important role in their Pro14 win in 2017. He joined Munster in 2018 and has represented them 45 times.
He captained Munster for the first time last month in the United Rugby Championship win against Ulster at Thomond Park.
On the International scene he made his Irish debut in the 2018 Summer Tour against Australia and featured in every game of the 2019 World Cup campaign. He was also selected for the 2021 British and Irish Lions squad and featured in the first two Tests against South Africa.
Speaking about the new deal Beirne said: “I have made some tough decisions in my career but this was an easy one. I am grateful to everyone who has supported me on this journey – my family, my partner and the different coaches along the way who helped me become a better player.
“Representing Munster, Ireland and the Lions over the past few seasons has been fantastic and I am looking forward to contributing in red and green in the years to come.”

McCool delighted King’s Cup to be held in Glasson again