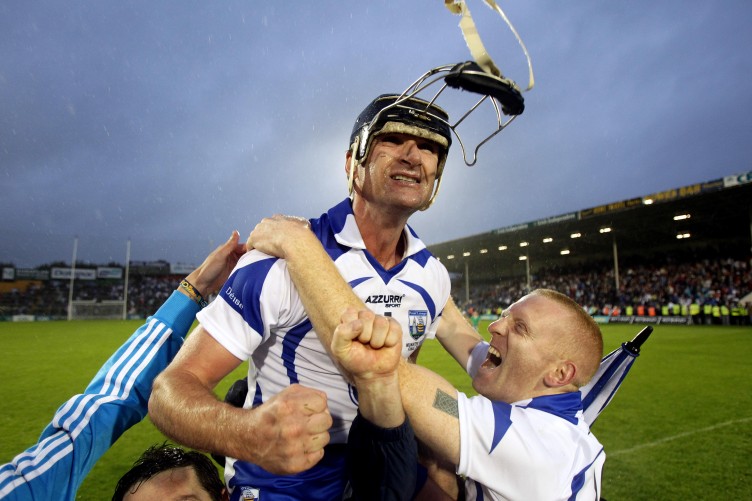 What makes a hurler great? For some, it merely equates to how many medals a player has won. Maybe that’s the case in American football or Soccer. In GAA terms though, where transfers are very much against the grain, such measures never tell the full story. Very often, the likelihood of a player’s success is dependent on geography. A man born in Kilkenny can win 5 All-Irelands much easier, than winning one if you are born a few miles over the border in Carlow or Laois.

In tribute therefore, to some of the less decorated members of the hurling fraternity, I give you the best hurlers of the last 25 years not to have won an All-Ireland medal. In the interest of completeness, I have included some players who are still searching for that medal. Hopefully, in a few years time, their records will have no asterisks.

A man who seemed to stop bullets for breakfast. His performance in the 1996 All-Ireland hurling final is surely one of the greatest by a losing finalist ever. Dedication to his art was such it caused him to lose a part of his anatomy. An awesome keeper, and David Herity’s favourite ever to boot!

He will argue that he’s 24 and still has plenty of time on his side. Then again how many Galway hurlers will have said the same after a losing summer in the past 28 years? Has won 2 All-Stars in the last few years and definitely one of the best defenders in the modern game.

An under-rated hurler in many ways, Ryan emerged on the scene after Wexford had their golden summer of 96, but was pivotal to their cause in the years after. Won an All-Star in 2001 and would surely have garnered plenty of accolades if he had been born in Cork, Tipperary or Kilkenny.

An automatic selection on the team. Started out as a corner forward, but made his name as one of Hurling’s all-time great corner backs. Won 4 All-Stars despite never getting to the holy grail. 2001 was the closest he came to winning one, but his injury in the last 5 minutes of the 2010 quarter final, when Tipperary edged past them and ended up winning the All-Ireland, will haunt Galway fans for years to come.

The hope surrounding his career was that he was playing for so long Waterford would eventually win one during his tenure. It wasn’t to be, and despite having one of the longest serving inter county careers ever (23 years) it tragically ended without a Celtic Cross in his pocket. A dashing midfielder, and an even better wing back, his presence is still missed.

What a hurler. Should have obtained at least 1 All-Ireland, as both the 1994 and 1996 finals were eminently winnable. Still and all, his legacy is not measured in medals, but by the outstanding games/moments he was responsible for. His point against Clare in the Munster semi-final of 1996 will go down as one of the most spectacular winners ever.

A hurler who still has plenty of years ahead of him, although he seems to be getting further away from success rather than closer. An All-Star winner in 2011 and 2013, will look at the latter year’s semi-final as his biggest opportunity missed as his sending off against Cork turned the tide of the game. Will hopefully get a similar golden opportunity in years to come.

A cert for this team. The only question was where to put him. Had claims on the centre-back and centre-forward position, but I’ve chosen him at midfield. Fantastic in the air and brilliant on the ground, his peak was probably at centre back in the Justin McCarthy 2004-2007 era. The only flower in the ointment of a brilliant career was that when he finally got to play in September in 2008, he was a year past his peak. Still and all, one of the best players in living memory.

Evidently, he has more than enough time to address this situation. Along with maybe Tony Kelly, the most gifted young hurler in the country today. A modern-day Ken McGrath, he can play any position and do literally anything. The only concern is that he sometimes tries to take on too much himself when he is playing. If the Waterford trajectory continues on its upward curve, an All-Ireland seems certain. He is essential to that happening.

Hurler of the year in 2007. An All-star in three other years. A goal machine of a forward who so often came up with the goods on the big occasion. The 2007 semi-final against Limerick will forever be a regret. After winning the league and Munster Championship momentum seemed to be taking them to an All-Ireland, but the abject concession of 5 goals killed them.

Looking back now, he’s a player from a bygone era. What that shouldn’t cloud though, is how good he was when he was there. Carried Limerick on his back throughout the 90’s winning 4 All-Stars. His clash against Liam Dunne in the 96 final will forever be a bone of contention amongst Limerick followers. A fully fit Kirby could have made all the difference on the day.

Definitely one of the most talented players on an immensely gifted Waterford team, but his discipline sometimes let him down. Too often he got frustrated when things weren’t going his way. On saying that he was an immensely skilful player, who often popped up with spectacular points and goals.

Had everything as regards speed and skill, what he may have lacked somewhat was temperament. His sending off against Cork in the 2004 Munster final really hurt Waterford in that year’s semi-final. 5 All-Stars, for a man who never got a Celtic Cross, tells you everything you need to know about the man’s ability.

Well he can still win one, but what seemed an inevitability at the start of his inter-county career, is now merely a possibility. A genius hurler when on form. The hope is that he will come back from his near career- ending injury in last year’s semi-final at the same level he produced in the year’s previous. It’s hard to see Galway winning one without him.

As regards talent, he was easily one of the best hurlers in the last 25 years. An astute hurling brain, with an awesome shot, he surely should have won more. His ex-team-mate Brian Flannery once remarked that he used to be “shaking” on the goal-line when he faced up to Flynn’s frees in training. His goal against Cork in the 2004 Munster final was one very few other players could have scored. Few indeed, had Flynn’s ability.