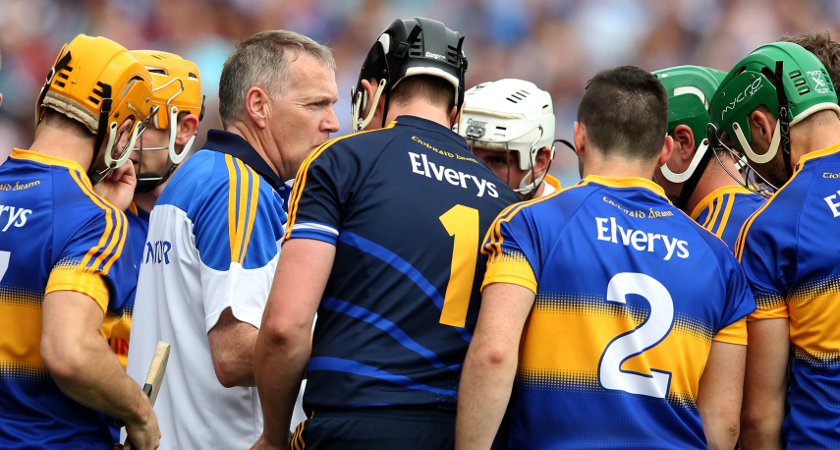 On the evidence of last September’s All-Ireland final and this season’s National Hurling League, Tipperary are now the dominant force in modern day hurling. The Premier county have always been one of the country’s top hurling sides, but their success rate in the last quarter-century (just 3 All-Irelands) feels somewhat underwhelming. Still and all, they’ve had some fine players during that period, so in their honour, I’ve decided to compile the best Tipperary team of the time. I’ve left out some of their great late 80’s/early 90’s players (Nicky English, Pat Fox etc) on the basis that most of their best hurling was behind them by the time (1992) this era started.

An automatic choice in the side. Of the last 25 years of Championship hurling, he was there for 19 of them. An exceptional shot stopper and could deliver long,booming clearances down into the opposition defence. Totally dedicated to his art. One of the finest keepers of the modern era.

Cathal Barrett looks to have the potential to take this position in the coming years, but he will have to work hard to achieve as much as this man. Been there since 2009, quick and steady as a rock in the corner.

A forgotten man in many ways, but when Tipperary won the All-Ireland in 2001 he was one of their most influential players. Injuries curtailed his influence in later years, but early on in his career he was one of the best full-backs around.

An under-rated player by many, Curran featured on the county panel for almost 15 years, and you don’t do that by being a 2 bit average hurler. Strong, calm, versatile. His brother Sean is now making waves in the squad.

Seems an aeon ago that he was playing, but he was a fine hurler when he was. Soldiered on a lot of average Tipperary teams before their renaissance in the late 00’s. A strong, skilful and reliable centre or half back.

Centre back has not been a spot Tipperary have automatically been blessed with in recent times. Colm Bonnar, James Barry and David Kennedy all came and partially succeeded. Given Ronan Maher’s potential, he could well make this spot his own in the next number of years but given he’s still a “possible great” rather than an actual one, we’ll give the position to the Newport man who served for more than a decade.

Can sometimes be a bit rash, both in terms of his positioning and his temperament, but there’s no doubting his ability to become one of the All-time greats. A monster in the air, strong and has really grown as a leader in the last few years. His best years may still be ahead of him.

Could have been used at right half back but is a natural at midfield. Possesses the stamina of an athlete and no little hurling quality too.

Not blessed with excessive strength or speed but he did have exceptional guile. When Tipperary needed someone to guide them in the middle in the 2001 season he was the man.

An underrated hurler in many ways, will never be deemed the most stylish of players, but without him the stylists wouldn’t be able to do their work. Has added scores to his game in recent years to make him an indispensable part of the Tipp set up.

The Steve Staunton of Tipperary hurling in a way. Namely, a disappointing management career detracted somewhat from a wonderful playing one. Wasn’t gifted with pace, but he was as strong as a bull and had exceptional skill. The game seemed to move in slow motion when he had the ball. A real leader during the county’s successful 2001 season.

Controversial, loud mouthed, temperamental and yet, undeniably brilliant. Leahy was the most important Tipp player throughout their travails during the late 90’s and his brilliance shone anywhere from half back to full forward. Majestic in the air and fantastic with his wrists, will be remembered by some for his miss in the 1997 All-Ireland, but that shouldn’t detract from an exceptional inter-county career.

Probably never became the player we thought he would be in the early 00’s-numerous injuries saw to that-but what a player he was. Similar to Waterford’s Paul Flynn in ways, not blessed with speed of foot, but had a bullet of a shot off both sides.

For a while seemed uncertain to fulfil his enormous potential but has now established himself as one of the best forwards in the game. Skill and pace to burn and with an eye for a goal. The perfect modern day forward.

Hurler, Pub owner, Tommy Walsh stalker…there were a lot of strings to Lar’s bow, and while he may have been controversial at times, what can’t be denied is he was a player blessed with pace and a supreme goalscoring touch. Hampered by injuries at times in his career, was nonetheless one of the greats.

IT Carlow gain revenge on UCC in the Fitzgibbon Cup