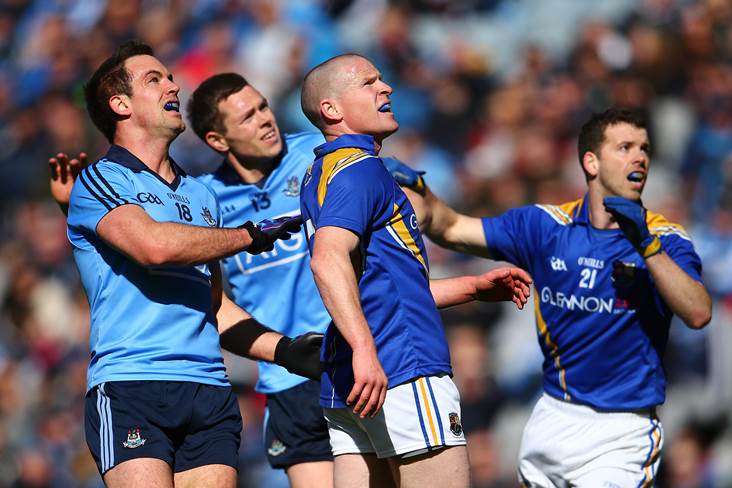 Last Saturday (30th Dec) Longford took on Louth in their opening game of the O’Byrne Cup. It was a mixture of new and old for manager Denis Connerton but one player missing from the team sheet was defender Dermot Brady. A familiar name in the starting 15 over the years for Longford. The veteran defender had decided to call time on his inter-county career.

Brady didn’t make a statement on social media to announce his retirement or do an interview with local media, he just never rejoined the panel. Nothing surprising about that, if you know Dermot. He’s a quiet guy who lets his football do the talking. Last year while doing an interview with Denis Connerton Brady’s name cropped up and we spoke of his contribution to Longford football. Connerton said that if Brady ever retired he’d just ride off into the sunset. That’s exactly what Longford’s cowboy hero did.

Being a player from Longford doesn’t earn you many plaudits but Dermot Brady was different. He was a no nonsense player and because of that people around the country knew him. He was a warrior and Longford’s own braveheart.

Brady made his debut for Longford in the qualifiers against Wicklow in 2001. It was a game Longford lost and was one to forget but Brady went on to enjoy some memorable wins for the county particularly with the qualifiers. He also wore the captain’s armband and was a real leader.

2015 after Longford were well beaten by Dublin in the Leinster Championship I spoke to Brady after the game; many felt it was his last provincial championship game. He was coy about his plans: “We won’t talk about that yet. We’ll just see what happens. It has got tougher and you need a lot of time for it. I still enjoy it and have been blessed that I haven’t had too many bad injuries. I keep saying once I don’t get injured I’ll keep going. It’s great though, I love it.”

Brady went on to play two more years in the Leinster Championship. 2016 was probably one of his best years; he played a part in Longford’s defeat of a strong Dublin side in the O’Byrne Cup and then put in a fantastic performance as Longford defeated Monaghan in Clones in the qualifiers.

Longford manager Denis Connerton summed up Brady and his contribution perfectly when he spoke Sportstalk.ie: “Dermot has made a tremendous contribution to Longford football both at club and inter-county level. He epitomises all that football should be about; leadership, courage, excellent decision making, discipline and undoubted talent. Players like Dermot are impossible to replace.”

On behalf of Longford GAA supporters far and near, thanks for everything Dermot.