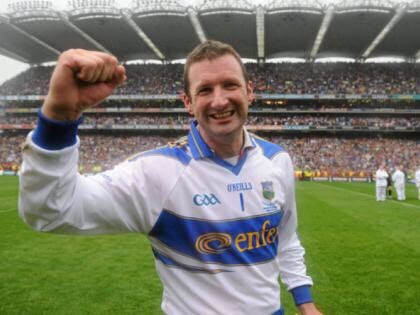 It is fair to say that Brendan Cummins was and is still considered the finest goalkeeper of all time. He was amongst a goalkeeping golden generation; with the likes of Damien Fitzhenry, Davy Fitzgerald and James McGarry, to name a few. The Ballybacon-Grange clubman was netminder on 73 occasions for the Premier County and put in many impressive performances along the way. Cummins gives all the credit to his local area near Ardfinnan, for his rise to goalkeeping royalty. He said: “Well, I grew up in a small area in South Tipperary, about 10-15 minutes from Ardfinnan. My dad John played football for Tipperary and I suppose football would have been in me initially. Jody Spooner and Fr Moran would have done a lot of work with the football and hurling teams respectively. I actually played Gaelic Football in Ballyporeen before Ardfinnan. It was where I learnt a lot of my skills. Back then it was hard to sustain playing both sports. I think now the balance is better than it was. I am currently the local Chairperson with the juvenile club and Vice-Chairperson with the adult club. It is great to help in any way I can. I would have played in a lot of ‘B’ South Finals with the hurling team and then we actually won an ‘A’ South Tipperary final. That meant a lot to me at the time. Growing up I just wanted to be as successful as I possibly could.”

Thinking back to one of his earliest memories as a Tipperary fan and player, Cummins describes moments that stood out to him in particular: “I remember going to the 1987 Munster Final below in Killarney. It was between Tipp and Cork. There was a huge atmosphere and something I will never forget. People were up off their seats and as a young lad I hardly saw any of it, but just to be there was something special. I remember playing for Tipperary for the first time. I was U14 and we took part in the Tony Forristal Tournament in Waterford. I was only 13 and we played Antrim in Mount Sion. I got to hurl with guys like Tommy Dunne, and Darragh Egan’s father was a selector at the time. At club level I remember we played Fethard at home and the game was fixed during a carnival that was taking place. I remember you could hear the generator going. I remember taking a penalty in the game and how much it meant to me at such a young age.” Cummins had it all as a goalkeeper for both club and county. Great puck outs, a fantastic pair of hands and an ability to stop shots from point-blank range. He said: “Ah, I suppose I would have had a lot of idols. Peter Schmeichel would have been one. I am a big Manchester United fan. I will never forget one day when Ger Canning referred to me as the hurling version of Schmeichel. I may remind him of that one. I suppose other players I would have looked up to would be the likes of Damien Fitzhenry of Wexford. I always tried to try and better him when we played Wexford. We actually played against each other a few times. The respect is definitely there. I remember a couple of years ago playing in a charity game in Newbridge and saying to myself, “I have to win this battle today”. We get on very well though. I would have studied his play as a goalkeeper a lot. Other names would include Ger Cunningham of Cork and Nicky English and Ken Hogan in Tipperary. They had everything. They were like God to me really.”

Coming from a GAA stronghold Brendan had a stellar career for Tipperary that expanded over the guts of two decades. He remembers being drafted into the set-up like it was yesterday. “Well, I played football for three years with Tipperary. I made my debut against Monaghan in a league game in 1993. Then Babs Keating drafted me into the set-up for the 1993/1994 campaign. He actually called my dad. Back then I had done no training and was told to meet up with the team in Cahir, as we were playing against Waterford. I hardly knew anybody in the squad. The full-forward for Waterford was a guy called Padraig Fanning, who was the head of sport in WIT, where I was attending college at the time. I said to myself at least I know somebody here. That went well, but it wasn’t always plain sailing for me. I remember we hammered Down in a league game, but I let in three goals. I always set myself high standards and that game was a disaster for me. Fr Tom Fogarty took over from Babs in 1994. He always had great belief in my ability. I always tried to maintain high standards and if I didn’t I would have been hard enough on myself. He backed me all the way and I never looked back.”

Cummins had many big performances for Tipperary, none more so than in the 2003 All-Ireland semi-final against Kilkenny. Tipp lost, but in the game Cummins showed that his shot-stopping abilities were of the highest standard. This was followed by a low point when Cummins was dropped by Babs for Gerry Kennedy in 2007. However, Cummins believes that this made winning his second All-Ireland in 2010, all the more precious. He said: “I think the 2010 Final against Kilkenny was my biggest memory in a Tipperary jersey. We had been building for three or four years and I hadn’t won an All-Ireland since 2001. At the time I didn’t think I would have to wait so long. All the talk was could Kilkenny do 5 in a row. After that defeat in the 2009 Final, we were determined to get it right and to finally get over the line was an incredible feeling. Liam Sheedy came on board in 2008 and we sensed the opportunity was there for us. Other memories being involved would have been with the lads at training and in the dressing room. We had great characters over the years. The likes of Joe Hayes and Darragh Rabbitte from 2001, were always making you laugh, whenever you were in their company. I remember before the 2001 Final getting a text the day before the All-Ireland, it read ‘Tipperary Champions’. We all got a great kick out of it. Another example would have been with Shane McGrath. He was on the team when Liam came in. He used to always be late for training. Liam let onto us that he was gonna tell Shane he was dropped. He showed up, Liam read the team out. McGrath was nearly crying. Liam said I am only messing, but don’t be late again. Moments like those stay with you, even to this day.”

The week leading up to a big game for Cummins was fairly routine. He revealed: “I would have a fairly standard routine, before a final. Training Tuesday, Wednesday off, I would go to the cryo chamber in the hotel to get my body right. I would then go to the cinema to relax in the evening with my wife. Training and work Thursday and then, go for a walk on Friday. By that stage you just need headspace and it helped keep me calm. Then I would travel with the team on the Saturday. In Croke Park, I always sat near to our kitman. And I suppose I would have been quite superstitious. I wore the same Man United jersey under the Tipp jersey for my entire career. I did anything that helped me focus. I would describe myself as a perfectionist. I was almost OCD like. I always had to be the best because I was afraid I would have been forgotten very quickly. I was the type of player who would take responsibility for goals going in. I would have never called out a defender because if it goes past them, then my job is to stop it going any further. I would like to think that I brought calmness to the defence.”

Cummins is a clubman first and foremost and has huge memories with the club. Despite being in his late 40s, Cummins still plays junior football with the club and has looked after himself well. “I won a Junior ‘A’ Final with the club, we beat Toomevara’s second team. I will never forget the emotion that went with it. It was the club’s first adult county championship. I won 11 South Intermediate hurling titles over the years, but the Junior County Championship meant more. I am glad I was able to help the club achieve this. In 2005 my club Ardfinnan won a Senior Football Championship, but unfortunately, I missed out, as I was away with work in Australia and New Zealand. I played in the club championship against Nemo Rangers the week I returned, but we were well beaten. I remember listening to the County Final live on Tipp FM, with a colleague and clubman of mine, Johnny English.”

As well as playing for his club, Cummins is now involved with GAA punditry. He feels this was a natural transition: “I would say I always had a love for radio. I remember when I was younger I would have listened to BBC 5 Live as a kid. I always wanted to instantly paint a picture for people. I remember working with Paul Byrne on RTE Radio and he gave me a run through. I definitely feel a lot more comfortable than I used to. I love listening to Carragher and Neville on Sky Sports. They are great. Michael Duignan also helped me a lot. I enjoy the co-commentary aspect for sure. I feel hurling has changed with the times and evolved. It has become more modern. Cork started a running game, Clare a physical game and with Kilkenny, you had to learn to be cute. Sports science is higher. It is just evolving. All teams are taking chances. The game is getting better and better. Style and identity are still there. You see that with Waterford and Limerick. The teams that don’t have a style or identity are the ones that are struggling. I feel hurling is in a good place at the moment.”