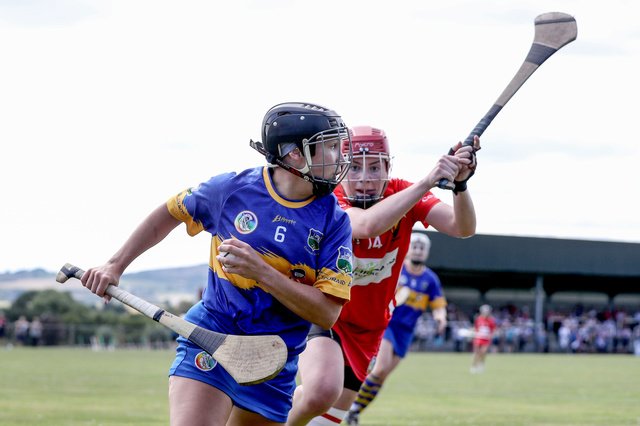 Tipperary 1-12  Cork 1-27
Cork kept their 100% record in tact with a comfortable with a 15 point victory at The Ragg.
Newly-wed Orla Cotter was among the early scorers as Cork went into a 0-5 to 0-1 lead. Tipp responded to make it 0-7 to 0-4 before Julia White ran onto a Niamh McCarthy pass before finishing expertly to the net. Although Tipp did grab a goal themselves before the break, from Ròisìn Cahill, Cork were already heading for victory as they led by 1-14 to 1-6 at the break.
Katrina Mackey would finish as top scorer for the Rebelletes, scoring 5 points from play, just ahead of Orla Cronin. Paudie Murray’s side had 11 different scorers and look odds on to claim a place in the All-Ireland semi-finals. This was Tipp’s 1st defeat with the Championship’s leading scorer and June player of the month Cáit Devane once again influential for her side.

Offaly 1-18 Wexford 1-12
Offaly moved up to 2nd place in the table with a 6 point victory over winless Wexford at St.Brendan’s Park, Birr.
Offaly led by 0-10 to 0-5 at half-time with Sarah Harding one of their stand-out players.
In the 2nd half Siobhàn Flannery goaled from a free to put the home side in control. With Harding and Michaela Morkan to the fore the Faithful always seemed the likely winners, although Wexford’s Chloe Foxe did get a consolation goal.

Meath 0-08 Dublin 2-11
Dubliin got their 2nd win of the campaign as they eased to a 9 point win over the groups bottom team in Trim.
David Herity’s charges led by 1-7 to 0-3 at half-time with the goal coming from Emma Flanagan after she received a hand-pass from Siobhàn Kehoe.
Dublin’s 2nd goal came from Kehoe, as she struck a great effort into the net following a brilliant Laura Twomey.
The victory keeps their hopes of qualifying for the next round alive.

Derry 0-11 Cork 0-11
Cork remain undefeated after securing a hard-point away to Derry, who have now drawn both of their games.
Derry were never behind in the game and led by 0-8 to 0-5 at the break.
The hosts also led by 2 with 10 minutes to play, but Cork never gave up and will be happy to come away from Swatragh with a share of the spoils.
Grainne McNicholl was among the top performers for Derry with Catriona Collins helping Cork get a point.

Laois 1-06 Carlow 0-09
Laois and Carlow both remain winless after their draw in Mountmellick.
Carlow led by 0-6 to 0-3 at the break, with Eleanor Tracey scoring all but one of their points.
Laois reacted strongly though in the 2nd half as 17 year-old Kirsten Keenan fired in an early goal.
It was nip and tuck for the remainder of the game with Carlow on the verge of winning it before a late score from Alison McEvoy.

Westmeath 2-13 Kilkenny 2-07
Westmeath moved level on points with Kilkenny after a 6 point win in Kinnegad.
The lake county led by 1-8 to 0-5 at half-time with Hannah Core finishing to the net to put them in a strong position.
However, Kilkenny responded brilliantly after the resumption with Rachel Kelly firing in 2 quick-fire goals to draw the sides level. Kilkenny would only go on to score twice more though as a Ciara O’Looney goal put Westmeath back in the driving seat.
Pamela Greville was also to the fore, scoring 7 points, for her brother Johnny’s side.

Kildare 0-06 Galway 4-18
Galway moved to the top of Group 2 after a convincing 24 point win over Kildare at Hawkfield.
Noel Finn’s charges scored 2-9 in each half against a Kildare side who have now taken 3 heavy beatings.
Tara Naughton was one of the westerners the top performers.

Tipperary walkover v Antrim
Antrim have been deducted 3 points for conceding the game, putting them at the bottom with -3.
Tipperary now move level with Galway at the top of the table with 7 points.

All Ireland Intermediate Camogie Preview: Galway vs Westmeath with our Camogie...