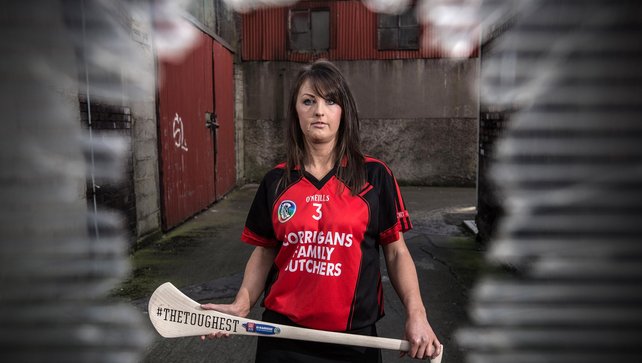 With the Division 1 league done and dusted for another year and the All-Ireland Senior Championship less than 6 weeks away Sportstalk’s Ger Kinane caught up with some of the top Intercounty stars around the country to discuss all things Camogie and their Counties ambitions for 2017. In the first instalment she spoke to Wexford defender Karen Atkinson. With a quick read of Karen Atkinson’s honours list it is clear to see that she has won every honour in the game including 13 senior county titles with her club Oulart-the-Ballagh, 5 Leinster Club titles and 2 All-Ireland Club titles. With Wexford she has won 4 All-Ireland titles and with Waterford IT an Ashbourne Cup in 2009. That list doesn’t even include national league titles, Leinster championships, Inter-provincial competitions or the array of under-age trophies she has won. And did I mention how she captained both her club and county to All-Ireland success! A truly remarkable feat for anybody!

Talking to Karen you get the sense she doesn’t really comprehend the magnitude of success she has had, perhaps it’s her unassuming nature or maybe the fact that she is completely focussed on the here and now and what she can still achieve with Wexford and Oulart this year.

Looking back to 2012 and captaining Wexford to a 3-in-a-row of All-Irelands Karen agrees that ‘yes I suppose I don’t really appreciate it, or think about it too much. I think it’s something that I will think about in years to come when I retire and go oh my god I can’t believe I walked up the steps of the Hogan Stand and lifted the O’Duffy Cup’. She has lots of ‘fond memories of 2012’ that she will always cherish. Being captain she never felt any pressure but got so much enjoyment from the whole experience.

Having won so much and with extended club seasons almost every year I wonder how the 30 year old Office manager at Roundwood Veterinary Practice has the motivation to come back year after year and give the huge commitment to don the purple and gold for another season. ‘This year I did find it tough to make the decision to commit to the County setup for another year. It took me ages to decide to go back but I think it took me ages because I wasn’t ready to leave the county scene. The club season often does run into the county season which can be tiring but to be honest it’s a good complaint to have to be going well with your club. I love playing with Wexford, I enjoy the level of training and if I didn’t go back I think I would miss meeting the girls from the other clubs’.

In 2016 Karen married Michael Sinnott. Like many members of the GAA family theirs was a December wedding so not to clash with Camogie. They enjoyed a week in Spain afters and the plan was to go to Australia and New Zealand in March or April as Karen had thought about retiring from intercounty camogie. However when she made the decision to go back playing again this year, the trip abroad was put to rest as 100% commitment was given once again to Camogie. ‘Hopefully we’ll get to go next December’. So how does Karen think Wexford will fare this year? ‘We had some mixed results in the league. We beat Kilkenny (the reigning All-Ireland champions) which was a massive achievement but suffered a very heavy defeat to Cork which really set us back. We were very disappointed not to get through to the league semi-final as that would have been our aim’. In their last group game Dublin came to Wexford Park seeking their first win of the campaign and defeated the home side by a point. This was another blow to Wexford but Karen feels that Dublin are a ‘good side, they are very physical and are better than what people give them credit for’. Rewind to last weekend and their meeting with Offaly in the Leinster quarter final which they lost 1-9 to 13 points. Karen comments how they ‘always have tough battles with Offaly. We beat them last year in the Leinster championship but then they beat us in the group stages of the All-Ireland championship’.

Looking ahead to the All-Ireland championship Wexford find themselves in Group 2 along with Cork, Tipperary, Offaly and Limerick. ‘We certainly won’t be looking past Offaly in the first round on the 24th June. We are playing them at home and that will be the focus for the next 6 weeks. It’s a very tough group and I think the championship is going to be very close this year with very little between any of the teams. We will be hoping of course to finish in the top 3 to qualify to the knockout stages’.

Managing Wexford this year are joint managers Mattie Flynn O’Connor and John Kelly a brother of Wexford star forward Kate Kelly who hasn’t returned to the Wexford set-up as of yet. ‘Kate hasn’t joined us yet so I don’t know what her plans are. She hasn’t announced her retirement so that’s a good thing and we are all still hopeful she will be back for championship’. Speaking of championship her own championship preparations have taken a knock.

Doing sprints in training last Wednesday she felt the effects of the hard ground and some pain in her lower calf region. This didn’t stop her training again on Friday night but during the match at the end of training the pain was getting progressively worse and she had to pull out. Originally thinking it was stemming from her calf a subsequent scan on Saturday revealed damage to her Achilles tendon to the point of it being very nearly ruptured. The tendon and surrounding muscles are completely inflamed leaving Karen with no choice but to miss the game against Offaly and to completely rest it. She’s not sure how long she will be out of action for but will no more after physio sessions again this week. She remains positive that it will come right and she will be fit and rearing to go come June 24th.

Oulart-The-Ballagh is steeped in camogie and hurling and this is where it all began for Karen when she joined the camogie club at only 9 years of age. She is fully appreciative of all that the club has done for her and is determined to give back to the club in time by helping out with underage teams when her own playing days are over. ‘I think it would be lovely to give something back to the club and it’s definitely something I want to do’. The current Oulart senior camogie team boasts 4 All-Ireland winning captains in Karen, Ursula Jacob and Una and Mary Leacy. A truly amazing achievement for any club team. I put it to Karen that Oulart are probably the only team in the country that has 4 All-Irelands winning captains in their side. Again this amazing fact doesn’t seem to faze her.

In fact it’s probable that she has never thought about it before. ‘I suppose we were just very lucky that the club were going so strong at the same time as Wexford made a break through and had so much success’. Karen’s sister Colleen who played alongside her with the club up until a few years ago also captained the Wexford Intermediate team to All-Ireland glory in 2011, the same year as fellow club player Ursula Jacob captained the senior team. Colleen was on the Wexford senior panel for all 4 of their All-Ireland victories which made it all the more special for Karen to share so much success with her sister. I ask Karen who was the toughest opponent she ever marked during her Wexford career. Without hesitation she states Cork’s Briege Corkery. ‘She just roams everywhere, trying to follow her is a nightmare. One minute you are a step in front of her the next she is half way across the field. You have to be so fit to try and keep up with her’. Karen has played alongside numerous all-stars with Wexford and names her own club colleague Ursula Jacob as the best player she has played with.

She comes to this conclusion because she has ‘had to mark her so often in training’s’. Finally I ask Karen if she had a magic wand what is the one thing she would change about Camogie? She immediately answers more coverage. ‘I would love to see more coverage of Camogie on TV and more people at camogie matches. Some of the attendance at county games is dreadful. It would be great if more people were interested in coming to games and if camogie had a bigger profile. I think referees have their part to play in this. Too often they don’t let games flow but are constantly blowing for frees. This ruins games. If games were let flow more, it would be better entertainment and I think more people would enjoy coming to watch them’.

On that note our interview concludes and I spend a few minutes thinking about what one of the country’s top players wished for – more profile and coverage for camogie. And then it hit me why Karen was so modest about her remarkable achievements captaining her club and county to senior All-Ireland titles in Croke Park and the fact that 3 more of her club mates are also All-Ireland winning captains, it’s because it doesn’t get the coverage and profile it deserves.

Struggling Sports Journalists, lack of help from NUIJ amid this pandemic

Managers View: “The bench paid off for us” Limerick manager John...