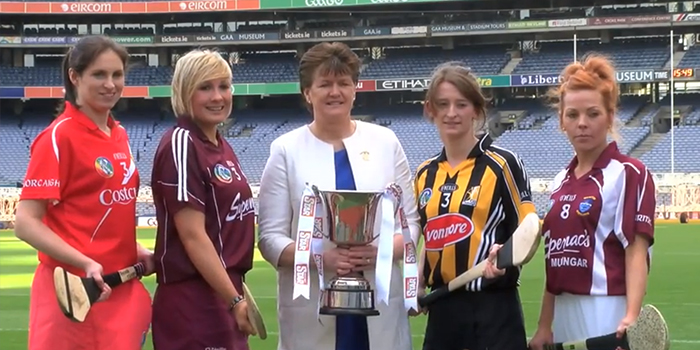 After last weekend’s final group games the pairings for this year’s Littlewoods Ireland Division 1 semi-finals have been decided. On Sunday April 23rd Group 1 winners Cork will take on group 2 runners up Limerick while this Sunday @ 4pm in Semple Stadium Group 2 winners Galway will meet Kilkenny who finished second in group 1 in what will be a repeat of last year’s league final which the cats came out on top in.

In their final group game Kilkenny suffered a narrow 1 point defeat to Cork 12 points to 11. In a pulsating battle between 2016’s two top teams Kilkenny finished strong with points from the in-form Miriam Walsh but ran out of time before they could find the equaliser.

All in all manager Ann Downey would have to be happy with reaching the knockout stages of the league as her side have shown the hunger to again be successful after the highs of 2016 which yielded a league and All-Ireland title.
Galway look to have really targeted winning the league this year and have been in impressive form winning all their group games so far including a 1-13 to 0-9 win over Limerick in last week’s final group game.

Ailish O’Reilly has been one of their main scorers in the league and she notched up 7 points last weekend while Linda Loughnane and Niamh Kilkenny also got on the score sheet. Limerick provided Galway’s toughest test so far despite both teams having already qualified. Galway manager Mark Dunne will be pleased with his side’s attitude and performance to date but will know that Kilkenny will provide a much tougher test on Sunday. With comfortable wins over Clare, Offaly and Meath in earlier rounds of the group Galway haven’t really being tested facing into a huge battle against the All-Ireland champions.

They will be boosted by the return of star forward Niamh McGrath who returned to the starting team against Limerick after her extended run in the club championship with Sarsfields. Group 1 will have been seen as the tougher group of the two and Kilkenny suffered two defeats against Cork and Wexford on their way to Sunday’s semi-final.

Often management learn more from defeats than a win and this along with the close intense battle against Cork only last weekend will be good preparation going into their semi-final clash. On the other hand the fact Galway had no real tough test will not go in their favour and they may find it difficult to get up to the intensity of Kilkenny.

A good start will be crucial on Sunday and if Kilkenny get their noses in front they have the scoring power of Miriam Walsh, Michelle Quilty and Shelley Farrell to see off Galway and book a place in the league final.
Verdict: Kilkenny