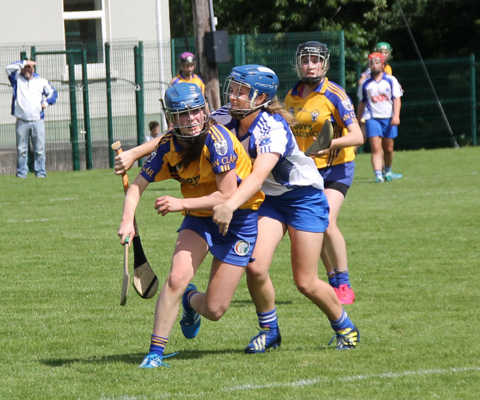 Clare registered their first win of the campaign when they prevailed to beat Waterford by 7 points thanks in no small part to player of the match Chloe Morey who finished with a personal tally of 15 points. This was a crucial game for both sides and their aspirations of qualifying out of the group as both counties had suffered defeats in their opening games the previous week. In an exciting battle, Morey opened the scoring early on with her first point before Waterford’s Beth Carton and Lorraine Bray responded to edge them in front.

This lead was soon extended with a goal from Waterford’s Kate McMahon. Further points from Morey kept Clare in touch but when Niamh Rocket raised a green flag Waterford found themselves leading by 6 points. Clare though were never going to lie down and Andrea O’Keefe’s points from play along with further pointed frees from Morey meant they only trailed by 2 points at the interval 2-5 to 0-9.

The second half was something of a shootout for large periods between the teams two marquee forwards Clare’s Chloe Morey and Waterford’s Beth Carton. Carton finished with a total of 5 points as she continued to impress this year. The crowd were treated to more goals galore in the second half with Clare’s Aine O’Loughlin first to raise the green flag to put them firmly in the driving seat.

For the Deise substitute Becky Kavanagh made a big impact when she scored a lovely goal but this was cancelled out 2 minutes from time with an Aoife Keane goal to seal a much needed 7 point victory for Clare. Waterford will have to regroup this week as they prepare for a difficult task with the meeting of Galway on the 1st July. Clare equally have a very tough next round as they travel to Kilkenny to take on the reigning All-Ireland champions.