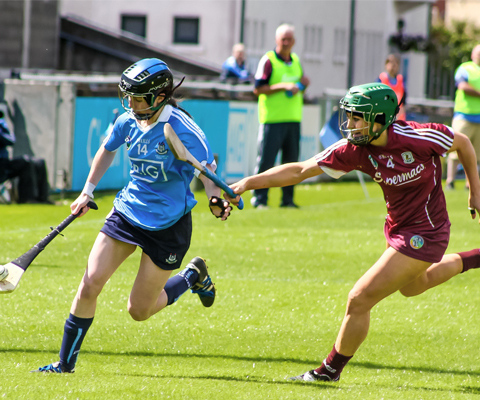 Dublin having the advantage of a game and a win under their belt the previous week was the quicker of the two sides to settle in this group 1 encounter, played in the sunshine in Coolock. A first half goal from Faye McCarthy had the Dubs leading by 6 points 1-5 to 0-2 after just 12 minutes as Galway were feeling the effects of a 10 week wait since their last competitive action. Amazingly McCarthy who is the Dublin goalkeeper also finished as top scorer as she displayed her expertise as a long distance free taker. Her goal a free from 80m caused panic amongst the Galway defence as it dropped towards the goal, they failed to deal with it and to everyone’s surprise the ball  finished in the back of the net.

Galway soon began to close the gap and 2016 All-Star Aoife Donohue found the back of the net in the 14th and 23rd minute to give Galway the lead at half time 2-08 to 1-09. Despite Dublin’s lively start and points from Ali Twomey, Aisling Maher, Siobhan Kehoe and Eimear McCarthy they were disappointed to be going in at the break trailing. For Galway Ailish O’Reilly was excellent and finished the game with a total of 11 points from frees and play. On the re-start Faye McCarthy scored another monster free to put a single point between the sides and both sets of supporters were expecting a tight keenly contested second half.

However instead it was Galway who found another gear and began to take control of the game. The Galway defence led by captain Heather Cooney dominated in the second half and Dublin only scored a further 2 points in the game. While at the other end Galway kept the scoreboard ticking over with another goal and 10 points. The goal coming from a Rebecca Hennelly penalty. Next up for Galway is a home game against Waterford on the 1st July while Dublin must travel to play Waterford a week later on the 8th July.
Dublin Scorers: F.McCarthy 1-04, A.Maher 0-03, S.Kehoe 0-02, A.Maguire 0-01, E.McCarthy 0-01