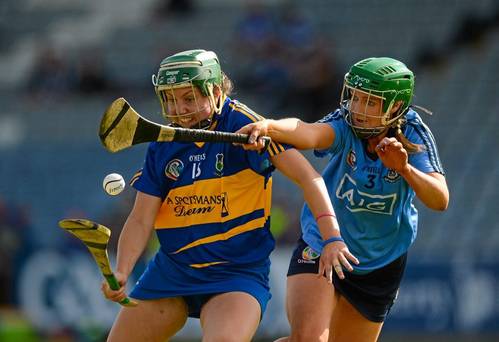 A win for Tipperary would have seen them take the third spot in the group and secure a quarter final spot, however Dublin had other plans and produced a hard-working team effort to grab a 0-14 to 2-8 draw. Captain Aisling Carolan who was named at corner forward operated as an extra defender as Dublin set out their stall in the first half to limit Tipperary who were playing with the aid of a strong breeze. Despite some early dominance and 2 points from Tipperary’s Mary Ryan and Miriam Campion it was Dublin who struck with an opening goal after 7 mins when full-forward Sarah O’Donovan powered her way through and hand-passed a goal.

Nicole Walsh was once again deadly accurate for Tipperary from placed balls finishing with 7 points in total, 3 in the opening half. At the interval Tipperary led 0-8 to 1-2 and all present wondered would 3 points be enough with Dublin having the benefit of the wind for the next 30 minutes.

Tipperary started brightly in the second half and scores from Megan Ryan and Nicole Walsh put them in pole position approaching the final quarter.

However Dublin continued to work tirelessly and never looked at easing up with Ali Twomey a constant threat and the experienced Louise O’Hara also pointing. On the 56th minute Tipperary had a 5 point lead 0-14 to 1-6 when Louise O’Hara goaled from a free.

A minute later a pointed free from Dublin put the minimum between the sides. Dublin who had taken the unprecedented move of bringing their goal-keeper Sile Nic Colter out the field with 10 minutes remaining saw their tactic pay off when she popped up to give the Dubs the equalising score from a difficult angle.

Protests from the home crowd that her shot was wide fell on deaf ears as the umpire reached for the white flag and the final whistle sounded.

Dublin will now need to record a 26-point victory over Derry next weekend to leapfrog Tipperary into third place and claim the coveted quarter final spot.

Derry suffered another heavy defeat at the weekend away to Galway 2-14 0-1. Galway are unbeaten so far with 3 wins from 3 but will face their toughest test to date when they meet Kilkenny in Kilkenny. Kilkenny who are in devastating form so far this year also remain unbeaten and will look to continue their winning ways at home next weekend.

In Group 1 a goal from Una Leacy on the stroke of full-time snatched victory for Wexford against All-Ireland champions Cork, who lost captain Aisling Thompson in the 55th minute for a second yellow card offence.

It took a piece of magic from Wexford to overcome the Rebels with a goal that will surely be a contender for goal of the year. With the sides locked at 9 points a piece after a low scoring affair, a sublime side-line cut by Kate Kelly floated all the way into the danger zone.

Leacy caught the ball and despite being surrounded by 3 Cork defenders turned and blasted her shot to the top corner to give Aoife Murray no chance in the Cork goals.

It’s all to play for in the final games in group 1 next weekend with Cork, Wexford and Offaly all on 9 points with 3 wins from 4.

Offaly bounced back from their heavy defeat to Cork last weekend with a 6 point win over Limerick, 1-16 to 1-10. Michaelea Morkan and Tina Hannon were most impressive for the Leinster side.

Limerick now face a tough assignment of an away meeting with Cork next weekend which they will need to win if they are to have a chance of claiming a top 3 spot and progressing from the group.

Meanwhile history was made in Waterford when the 2015 Intermediate champions claimed their first ever senior championship victory thanks to 2 late points over Clare to leave the final score 1-8 to 10 points. Clare who have had a disappointing campaign so far found themselves behind 1-5 to 0-3 at half time, Waterford’s goal coming from a Trish Jackman penalty.

On the resumption 3 points from Roisin McMahon saw the Banner take the lead but it was the hosts who finished the strongest with a Beth Carton equalising point before Trish Jackman converted a late 45 to secure victory. Clare will now host Wexford in their final group game while Waterford must travel to Offaly.