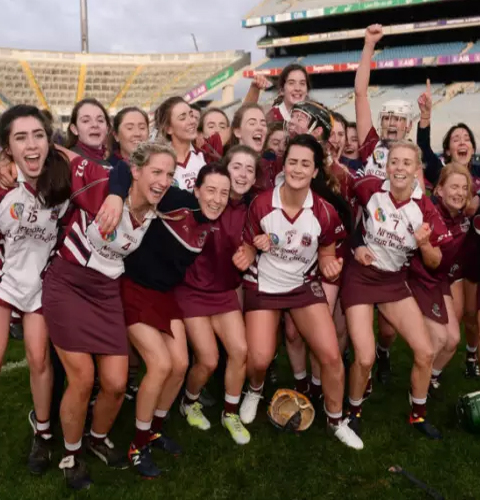 A dream start and a perfect finish were the two key components for Slaughtneil’s All-Ireland Senior Club Camogie final on Sunday. In front of the largest ever attendance for a club All-Ireland final Slaughtneil of Derry made  history after a thrilling match to be crowned All-Ireland champions. From the throw in Shannon Graham pounced on the sliothar to gain possession and went on the first of her many attacks into the Sarsfields defence which yielded the opening point for her side. From the resulting puckout Sarsfields fouled the ball by stepping out past the 14 yard and the resulting free was pointed by Louise Dougan who was flawless from placed balls throughout the hour.

Two points on the board within the opening two minutes a dream start indeed for the Ulster champions. Sarsfields had their first score of the game after 5 minutes when Niamh McGrath pointed a 45m. From here on in it was a ding dong battle as the top two teams in the country kept all in attendance on the edge of their seats. Sarsfields took the lead by the 9th minute when Orlaith McGrath pointed from play minutes after her sister Niamh scored a mammoth free. At the interval Slaughtneil held a slender lead 7 points to 6. They could have been further ahead only for some missed opportunities (including hitting the post) and good defending by the Sarsfields defence in particular Aisling Spellman, Laura Ward and Tara Kenny. The second half continued at the same tempo and when Eilis Ni Chaiside who was superb throughout the 60 minutes reacted quickest to a save from Sarsfields keeper Yvonne Lyons her reverse pass along the ground found Mary Kelly all alone at the edge of the square.

Kelly skilfully picked the ball with one hand turned onto her strong side and made no mistake to score the crucial only goal of the game. Sarsfields needed to respond and that they did by switching corner forward Siobhan McGrath out to the half forward line where she immediately exerted her influence and scored 3 excellent points from play as the game really opened up with both sides battling for every ball. Eilis Ni Chaiside pointed to keep Slaughtneil’s noses in front but Sarsfields backboned by the 4 McGrath sisters continued to press forward and the sides were level 1-8 to 11 points when the youngest of the sisters 16 year old Siobhan shot her 3rd point of the game.

Crucially though for the Galway side they could not edge ahead despite having the upper hand at this period. They were resisted time and again by the spirited Ulster side who had heroes throughout the pitch in particular Aoife and Eilis Ni Chaiside, Louise Dougan and Shannon Graham who covered every blade of grass in Croke Park. In the 59th minute with the game in the melting pot the determined Graham was fouled and Dougan pointed to restore their lead. A minute later Eilis Ni Chaiside went on another of her runs and finished with an inspirational point on the run down the left wing to the delight of the vocal Slaughtneil support.

Sarsfields went desperately seeking a score but to no avail as referee Ray Kelly sounded the final whistle. Minutes later captain Aoife Ni Chaiside delivered a fantastic acceptance speech completely as Gaeilge in a fitting tribute to her late father Thomas, the joint manager who passed away 5 days before the drawn Ulster final.

“WHAT THE FUCK WERE YOU THINKING, LADS?”