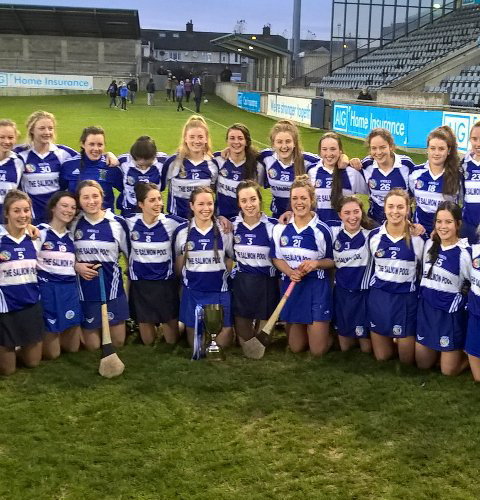 For Thomastown Camogie Club in Kilkenny and Sarsfields Camogie Club in Galway all roads lead to Birr in County Offaly on Sunday January 29th as both sides do battle for a place in the Senior All-Ireland Club Final. In what could be dubbed the ‘Battle of the Sisters’, as the McGrath sisters of Sarsfields go head-to-head with the Farrell sisters of Thomastown. For any family and in any sport it’s an unbelievable achievement to have more than 1 sibling competing at the highest level but when Galway senior camogie team competed in the All-Ireland semi-final last year three McGrath sisters namely Niamh, Clodagh and Orlaith all played key roles.

This achievement by a set of sisters was probably only bettered by the Farrell sisters Shelly, Meighan and Anna who lined out on the Kilkenny team that defeated Galway that day and went on to win their first All-Ireland in 22 years a few weeks later. Both set of sisters are the backbone to their club team and have led from the front in their club side’s successful run to the All-Ireland semi-final.

While Niamh, Clodagh and Orlaith McGrath are household names in Galway camogie with their exploits at senior inter-county level it has been their younger sister Siobhan (16) who has been the star for Sarsfields in 2016.  Her goal 6 minutes from time in the county final replay was crucial in finally seeing off Mullagh and Sarsfields being crowned county champions for the very first time. Her performance that day earned her a player of the match award and she was recently awarded Galway Camogie Player of the year a remarkable achievement for such a young player. To add to the family affair the team is managed by their father local hurling legend Michael ‘Hopper’ McGrath.

The club which was founded in 1981 is made up of the parishes New Inn, Bullaun and Woodlawn. They have been the up and coming club in the last few years in Galway winning numerous underage titles and despite having a very young side (the oldest player is 23) they were many people’s favourites to capture a senior title in 2016. With no Connaught championship the team have had an extended break as they wait to finally meet the Kilkenny champions on January 29th.

For Kilkenny camogie 2016 has been a fairy tale, winning both an Intermediate and Senior All-Ireland final in September. For the Farrell sisters the great year continued when they won the county final. They followed this up with an impressive win over Oulart of Wexford. In the Leinster final they found themselves trailing 8 points to 3 to Dublin champions St. Vincents after 40 minutes. However they displayed tremendous spirit to fight back and player of the match Shelly Farrell was attempting to score the equalising point in the 63rd minute to force a replay. Her shot was blocked by the St Vincents keeper and Catherine Walsh was on hand to finish to the net to secure victory for Thomastown 1-7 to 8 points. As with Kilkenny Meighan, Anna and Shelly are key players for Thomastown. Younger sister Eimear is also part of the panel and has been called upon throughout their campaign to come off the bench as an impact sub. Another interesting element of the ‘Battle of the Sisters’ is the likely hood that some of the McGrath sisters will be in direct opposition to the Farrell sisters. With Niamh lining out at centre forward she will be picked up by Thomastown’s centre back Meighan Farrell. Anna Farrell has been the driving force for Thomastown at midfield and Sarsfields may deploy Orlaith to midfield to quell her influence.

Both sides will enter into this fixture quietly confident knowing that they are only an hour away from playing in their first ever senior All-Ireland club final. With Maria Cooney and Tara Kenny among their ranks Sarsfields have some exceptional talent available to them. Thomastown will know they can’t afford to be in disciplined with 3-time all-star Niamh McGrath lethal from placed balls. At the other end star attacker Shelly Farrell is likely to start at full forward for Thomastown but has been known to come further out the field when needed. Sarsfields young full back line of Rachel Murphy, Laura Ward and Aisling Spellman will relish the task of keeping her influence to a minimum.

A cracking encounter is in store and Camogie fans are encouraged to travel to Birr to witness some of the country’s most talented players in action.