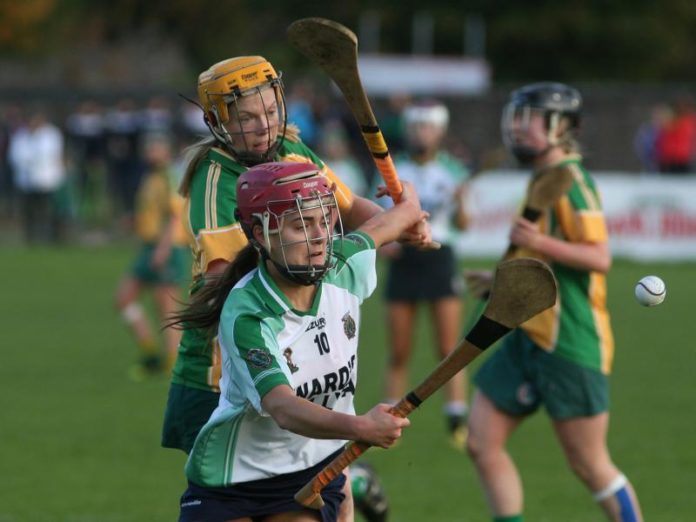 A less than ideal start to an All-Ireland semi-final as ground staff in Birr deemed the pitch unplayable 90 minutes before throw in to the disappointment and anger to all involved. At first it look as the game would have to be postponed till the following Sunday before St Cillian’s GAA Club became available. And so the start time was put back by 30 minutes and finally the semi-final began.

In a low scoring encounter in difficult weather conditions it was the 13th minute before the first score from Sarsfield’s Niamh McGrath. Amazingly this was to be her side’s final score of the half as Thomastown sprung to life and dominated proceedings for the remaining of the first half. Scores from Niamh Donnelly (2), Anna Farrell (2) and Jenny Reddy put Thomastown into a 5 point to 1 lead going in at the interval.

A re-energized Sarsfields emerged in the second half and started to get on top in midfield. They launched attack after attack which resulted in frees, which Niamh McGrath duly slotted over. Good teamwork between Maria Cooney and Orlaith McGrath resulted in a Sarsfield’s equaliser. Another point from Niamh McGrath put Hopper McGrath’s side back in front by a single point before Niamh Donnelly pointed to put the sides level once again 6 points apiece. In a tense physical battle both free takers pointed and extra time looked on the cards as injury time approached.

However it was to be the Galway champions day as Niamh McGrath held her nerve to coolly slot over a 45m to their supporters delight. Thomastown will be disappointed that they didn’t build on their 4 point cushion after the restart. Star forward Shelly Farrell was well marshalled by the Galway side and was unable to get on the score board.

For Sarsfields Niamh McGrath once again showed her class from placed balls and showed great leadership throughout. They now march on to the All-Ireland final on the 5th March where they will face Ulster champions Slaughtneil.