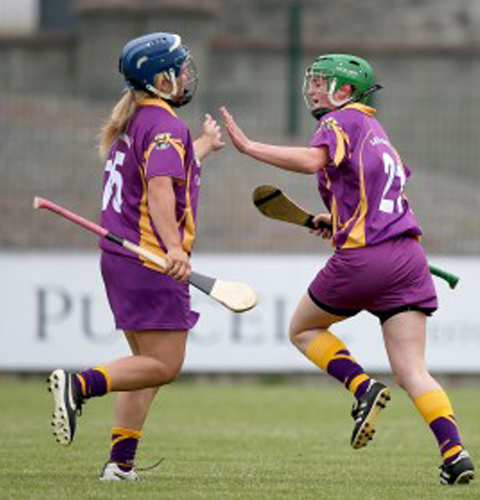 Despite playing with the aid of a strong wind in Wexford Park, a very poor first half performance meant Tipperary trailed the homeside 1-5 to 0-4 points at the break. Some harsh words were spoken in the dressing room and a more determined Tipp emerged in the second half but just when they got back on level terms thanks to 2 goals in 3 minutes Chloe Foxe came off the bench to score 1-1 and put Wexford back in the driving seat.

Brian Boyle’s charges travelled to Wexford seeking their first win of their campaign while Wexford were looking to get back to winning ways after a very heavy defeat to Cork. Wexford got off to a bright start with Una Leacy causing the Tipperary rear-guard all sorts of problems from the off with 2 points within the opening 3 minutes.

Linda Bolger added a point from a free before Tipperary’s Cait Devane pointed from a free in the 4th minute. Emma Walsh and Stacey Kehoe pointed in the 5th and 8th minute respectively as the Tipperary side allowed their markers too much space and time on the ball. Some good work from Tipperary by Cait Devane and Megan Ryan found Nicole Walsh free and the Borrisoleigh woman made no mistake to fire over Tipp’s second point and opening score from play. A second Devane free meant only 2 points were between the sides 0-5 to 0-3 approaching the 23rd minute. Moments later despite Tipperary switching defenders to curtail the influence of Una Leacy she released a powerful shot straight off the ground to send the ball to the back of the net. Erena Fryday responded with a point and the score at the break read Wexford 1-5 Tipperary 0-4.

Two Linda Bolger frees after the interval extended the homeside’s lead but Tipperary responded with a well-taken Orla O’Dwyer goal. Tipp who were now playing with a renewed confidence went on the attack again 3 minutes later and a high ball in by Nicole Walsh found Erena Fryday on the edge of the square. She beautifully executed an overhead volley to send the ball past Nicole Fortune in the Wexford goal to suddenly leave the sides level 1-7 to 2-4. With the game suddenly coming to life Chloe Foxe was introduced off the bench and she immediately made her mark with a pointed free. Orla O’Dwyer levelled for Tipp before the killer blow came from Wexford when Foxe showed her determination to score a goal in the 44th minute. From here Wexford pushed on and with Ciara Storey, Karen Atkinson and Mary Leacy all strong in defence Stacey and Shelly Kehoe, Foxe and Joanne Dillion all pointed to secure victory.

Two late Cait Devane points left the final score Wexford 2-12 Tipperary 2-07. Despite currently being on zero points a win for Tipperary over Offaly and if Wexford beat Limerick next weekend will see Limerick, Offaly and Tipperay all on 3 points and score difference will be needed to determine who goes through. While for Wexford regardless of sitting in second spot on 6 points if they were to lose to Limerick and Offaly beat Tipperary they could fail to qualify if they end up with a poorer score difference. So still so much to play for heading into the final weekend of fixtures in group 2.