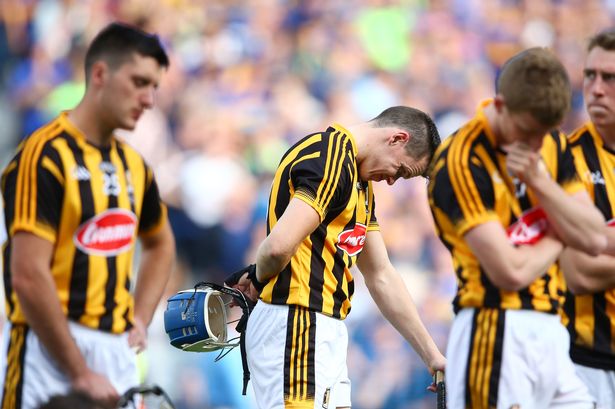 Picture the scene. It’s the 49th minute of the 2011 All-Ireland hurling final between Kilkenny and Tipperary. Colin Fennelly wins the ball around 60 yards out from the opponents goal and plays a beautiful handpass to the onrushing Eddie Brennan. The jet heeled Graigue Ballycallan attacker puts the ball on his stick and, as he so often did throughout the years, bombs towards goal. In his peripheral vision he spots Richie Hogan on his left and he slips his forward colleague a handpass. The Danesfort man balances the ball on his stick for a millisecond and, just before the despairing Paddy Stapleton can intercept, pulls the trigger to leave Brendan Cummins with no chance.  As the old comedy duo the D’Unbelievables would have said, “One Bullet. Bang, Bang. Back of the net”

Skip forward a few years now. It’s the 25th minute of the 2014 All-Ireland final between the same 2 sides. Paul Murphy wins the ball in the Kilkenny defence and plays a long ball into the Tipperary half back line, where TJ Reid grasps it magnificently. Almost immediately he is set upon by two defenders in the shape of Paddy Stapleton and James Barry, but he somehow manages to get a pass away to the free Richie Power. The Tipp goalkeeper Darren Gleeson is out like a flash to try and deny the Carrickshock man,and the instinct for the vast majority of forwards would be to pull first time. Power doesn’t do that though. Instead he scoops the ball ever so delicately over the onrushing goalkeeper, before tapping it into the empty net.

2 games, 2 Richies. 2 chances, 2 goals. It also, ultimately, resulted in 2 All-Ireland victories for Kilkenny. Looking back on both goals, it’s amazing how close each one was to being denied. Hogan’s goal in 2011 was mere centimetres away from being blocked by Stapleton. Power had just milliseconds to evade Gleeson with his flick. In elite sporting terms that’s all there is to it. The difference between somewhere and nowhere, success and failure is literally, as Al Pacino once famously put it, a game of inches.

Now fast forward another 5 years to the 2019 All-Ireland hurling final between the same sides yet again. It’s the second minute of the game and Walter Walsh wins the ball some 45 yards out. He advances towards the goal and passes it to his right to Colin Fennelly. Fennelly attempts to pull the trigger but is denied by a hook of, of all people, Tipperary’s corner forward John McGrath.

In the 12th minute TJ Reid wins the ball and plays one of his trademark passes to Walter Walsh who receives the ball in space around 20 yards from goal. Walsh has a moment or two to take the chance on his left hand side, but instead, elects to turn in on his right where he is held up by Brendan Maher. A free is won and TJ Reid points it, but there is only one point gleaned when potentially there could have been 3.

Now both of these opportunities weren’t gild edged gimmies, but neither were those in 2011 or 2014. Fennelly was unfortunate to be denied by a brilliant piece of defending, but could have finished if he had shortened his grip like his uncle, Liam, was so famous for doing. Walsh may have stuck it in the net if he had chosen to blast it off his left, instead of insisting on turning inside. In the sixth minute there was another half goal chance, if Richie Hogan had played the ball into an unmarked Colin Fennelly, rather than taking his point himself. Conor Browne, Walter Walsh and Billy Ryan had similar half chances in the second half that weren’t taken. Where once Kilkenny’s forward line was comprised of stone cold assassins, ala Eddie Brennan in the 2007 final against Limerick, nowadays, the attacking edge has been blunted. It might be just the most minute difference, but at this elevated level, that is frequently all it takes.

Now contrast this to what happened on the Tipperary side. For the first 20 minutes of last Sunday’s game, they barely had sight nor sound of a chance. Then Niall O’Meara received the ball from Jason Forde thirty yards out, turned Conor Fogarty completely inside out, and hammered it into the bottom corner. In the 42nd minute, after Seamus Callanan had already got the side’s second goal, he won the ball out near the sideline and cut inside. He could have easily decided to take his point but, spotting Bubbles O’Dwyer in space, he cunningly played it inside to the Killenaule man. O’Dwyer, like Hogan in 2011, didn’t even take the ball in his hand, before firing home. 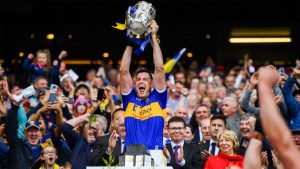 Just like Dublin hammering Mayo in the first ten minutes after half time of the football semi-final, Tipperary only needed 5 minutes, from 37 to 42, to change a level game to an 8 point lead. The best teams, when they’re on top, make it count. Ipso facto, that’s why they are the best. Now the sending off was obviously a factor in the margin of the result, but essentially it boils down to this: Tipperary had better forwards than Kilkenny. They availed of the opportunities Kilkenny didn’t. When you have excellence such as Callanan, Bubbles, O’Meara, Jason Forde and the 2 McGraths,  you always have a chance. Give them time and space, as was evident in the second half, and the result becomes an inevitability.

Whether it’s because of the coaching of Eamonn O’Shea and others, or just inherent natural ability, Tipperary’s skill level was quite a few notches above Kilkenny’s last Sunday. The Cats matched their opponents in many ways, particularly in the first half, but their poor decision making and touch turned, what could have been a close game, into a rout. A good example is Colin Fennelly. In an Off the ball preview for the final last Saturday, 00’s legend Aidan “Taggy” Fogarty said about him: “If he had a first touch, he’d be the best hurler in Ireland” Unfortunately for Fennelly and Kilkenny though, he doesn’t. He’s just turning 30 years old and has had a fantastic career. He is one of the quickest and most powerful forwards Kilkenny have ever produced. Yet because of that ever so minute skill deficiency, he will never be spoken of in the same breath as TJ Reid, Richie Power and Seamus Callanan.

Therein lies the essential conundrum facing Cody. There is no faulting the application of this team, but is there the ability within them to win another All-Ireland? All of the goals conceded by the side were as a result of poor decision making. One of the Kilkenny defenders, whether it be Conor Fogarty on the first, Paul Murphy on the second or Joey Holden on the third, was drawn out of position leaving space for someone else inside. Tipperary had forwards who could peel away from their marker, get the ball and play a pass, knowing that their colleague would finish. Kilkenny, unfortunately, didn’t have that luxury. Ever since Richie Power left the scene in 2015, or perhaps, when Richie Hogan dipped from his peak after 2016, they’ve struggled for that. Kilkenny were outplayed for a lot of the drawn 2014 final, but hung in there because their forwards were capable of taking their chances. The 2 Richies got 2-7 between them in that game. Tipperary’s forward line is as good, if not better now as it was then. You could hardly say the same about Cody’s men.

In time, getting to the All-Ireland final with this team will be seen as one of his greatest achievements. Look at this Kilkenny side on a pure merit basis and ask yourself, where do they rank against other teams in the country? Behind Tipperary obviously. Wexford too, if you were to consider their record over this year (played 3, won 0). An argument could also be constructed that they’re inferior to Galway also, considering the Tribesmen defeated them on home soil this year in the round robin, while simultaneously missing their best player. And I’m sure if a fresh Limerick faced up to them, they would fancy their chances as well.

Indeed, you could make a convincing argument that this Kilkenny side is, perhaps, the 5th best side in the country. That’s not including, Clare, who’ve a very good record against Kilkenny in recent years in the league. Compared to a lot of the opposition in this current championship, this is an average Kilkenny team. In reality, it was a miracle that they made it as far as last Sunday. And yet due to a number of factors-the indomitable spirit of the side, the wizardry of TJ Reid, the managerial genius of Cody- it didn’t seem strange that they were in the final, or inconceivable that they could win it. Yet the deficiencies that all hurling supporters, Kilkenny and non Kilkenny alike, always knew were there, were so brutally exposed in that painful second half. The lack of variety in their game, the naiveté of some of their defenders, the skill level of their forwards.

That’s not to say there aren’t some positives. TJ had some fantastic moments in the game, and would probably have been hurler of the year if the side had triumphed. John Donnelly was absolutely heroic in his first All-Ireland final. Adrian Mullen, has had a tremendous debut year, and one wonders how things may have changed if he was not struck down by illness during the week of the game. It’s the other 3 forwards who Kilkenny need to be worried about though. Richie Hogan obviously doesn’t want to end his Kilkenny career on a sour note, but his body is against him. He has not finished a game for the county this year and listening to him speaking on “Off the Ball” during the week, it’s amazing that he played in the All-Ireland final at all. Walter Walsh and Colin Fennelly are 28 and 30 respectively and one wonders are their best days behind them. They certainly have a lot of miles on the clock.

All of the players last Sunday gave their all, and can be proud of their efforts, but can their physicality and determination mask the deficit in finesse? Is there another TJ, DJ, Henry or one of the 2 Richies out there? For Kilkenny’s sake, you’d hope so. Otherwise the road back is going to be even longer than usual.