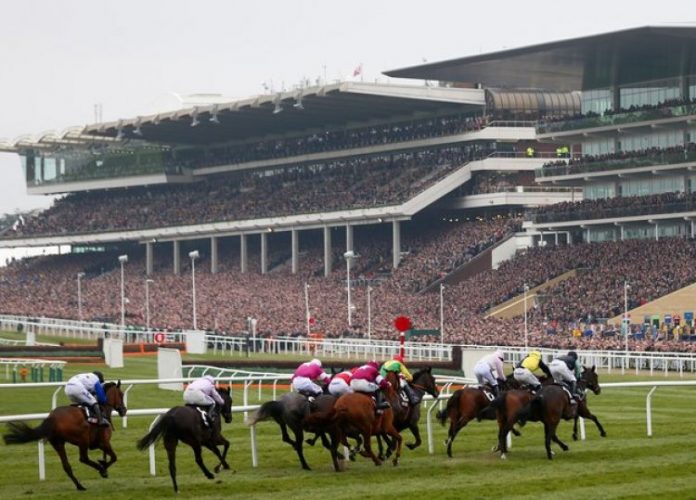 Emmet – “It’s Nicky Henderson versus Willie Mullins. Constitution Hill and Jonbon; they’ll both go
And then it’s Dysart Dynamo and Sir Gerhard
“I think the betting is all wrong, I’d take Jonbon as favourite; he sets the standard. I think he’s a better prospect for this race
“It’s between those two in my opinion. Dysart Dynamo might have too much and he’d be my pick.”

Katie – “I wouldn’t rule out Mighty Potter. Dysart Dynamo is the one to beat.”

Brian – “I’d be saying Dysart Dynamo is the best of the Irish. Constitution Hill is a fair animal. Dysart Dynamo for me but Willie (Mullins) has another one in the race called State Man; I wouldn’t be surprised if he ran a big race.”

Johnny – “I’m not sure either run in the race (Dysart Dynamo and Sir Gerhard). I like Kilcruit here. Cheltenham has been a bit diluted with races. If they all turned up this would be an amazing race.

Aaron – “The betting is revolving around Constitution Hill because we know he is definitely going in it. If Dysart Dynamo is going on the day he’ll go off shorter than Constitution Hill.. You’ll see a true market closer to the time.”

Mikey – “Dysart Dynamo; I don’t know if he’ll go in the Supreme. Sir Gerhard is solid and I think he’ll run in the race. I think he’s a machine.”

Johnny – “It’s a very tricky Arkle. To me it’s not a betting race. I’d be tempted for Haut en Couleurs.”

Katie – “Riviere D’etel. I think she’s a good bet for Cheltenham for the Arkle. I think for me she’s the pick of that race.”

Brian – “Edwardstone is the big English hope. The one I like here is Willie’s Haut en Couleurs.”

Aaron – “Nothing stands out. Edwardstone is a solid favourite.”

Katie – “Teahupoo; I think he’s probably our best chance in the Champion Hurdle for a few years now. I think he’s the most impressive horse coming off his juvenile year. There is more to come. If Honeysuckle is going to be beaten, this is the year.”

Johnny – “Teahupoo is a good bet. Honeysuckle; I’d like her to finish her career unbeaten.”

Mikey – “Honeysuckle is by far the best horse I’ve seen. She is flawless. No one will get near her. I love how intelligent she is.”

Emmet – “Honeysuckle; she might get taken out this year”.

Brian – “Honeysuckle is a different class. Honeysuckle for me. She is the best mare we have seen in a long time. She’ll take a lot to be beaten. If Appreciate It can turn up and win the Champion Hurdle it’ll be the greatest training performances of all time. Honeysuckle to beat Teahupoo, and Zanahiyar in third. An Irish 1, 2 and 3.”

Brian – “Hard to know who’ll turn up here. It’s not a race I’ve a huge opinion on but if I was to have a bet I’d put an each-way on Queens Brook.”

Katie – “She’s very consistent and a good mare (Queens Brook). You’ll see a different horse in Cheltenham again. I definitely think there is value in her. For me it’s between her and Stormy Ireland.”

Emmet – “I think Queens Brook will turn her form around but I don’t think anyone will come close to Stormy Ireland.”

Johnny – “There shouldn’t be a Mares’ Hurdle. I don’t know why you need these races. I’d have Royal Kahala as an each-way bet.”

Mikey – “I wouldn’t have Stormy Ireland. I just don’t think she’s going to get her own way. I think Gordon Elliott is the greatest man to get winners at Cheltenham. He’s an absolute genius. Queens Brook would be value for me.”

Aaron – “With my punter’s hat on me, this is one of the races that you could wait until the day to get better placed.

Katie – “He has Cheltenham form (Fury Road). I think Run Wild Fred is the one to beat in that. That race will suit him down to the ground. Vanillier is the one for me.”

Brian – “Vanillier. I backed him at 14s last year, so I can’t desert him now. I’m a fan of Run Wild Fred, he’ll be right up there. This is one of the better races. This is a cracking race.”

Emmet – “The jockey is vital. Vanillier is the one to beat.”

Johnny – “I’m in the Vanillier camp as well.”

Mikey – “I think Gavin Cromwell is a great trainer. Run Wild Fred is very solid. I think Vanillier was running a little bit better last year than he is this year. Run Wild Fred, I’ll give him the nod. If Vanillier turns up in the form he can, I’d be with him.”

Aaron – “It’s a three horse race. This could be a proper betting race.”

Johnny – “Whatever JP (McManus) runs in it he’ll have something lined up in this race.

Katie – “For us it’s the Tide Turns. He’s got what it takes. I also like Ebasari.”

Brian – “Tide Turns. He looks like a horse made out for this race.”

Emmet – “Willie (Mullins) has a terrible record in the Boodles but he also had one in the Gold Cup and then won it. I quite like HMS Seahorse.”