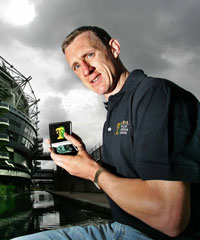 “Clare for their part, had all the hall marks of a team that peaked last April”

Last Sundays All Ireland quarter finals could be summed up by the title of that famous western movie – “The Good (Galway v Clare in parts), The Bad and The Ugly” (apologies to Waterford and Wexford readers)!! We left Thurles knowing a lot more about the main protagonists, albeit in the knowledge that much stiffer tests lie ahead before final judgement can be passed.

Galway proved, as if we needed it, that they are serious championship contenders. There was ever only going to be one winner after they made the initial running against an extremely tired and lethargic looking Clare outfit. They showed that they were above the opportunistic criticism levelled at them by self-serving “experts” with no agenda other than to be controversial. I have to say I was very impressed with Galway’s Leinster Final display for the most part. Ok so they couldn’t keep up with Richie Hogan and co when they raised the ante to meteoric levels after half time – but then again who can on current form? They have a huge work ethic, play a direct style, and have quality forwards who can win their own ball and engineer scores.

They learned from their Leinster Final mistakes with Daithi Burke and Aidan Harte, amongst others, giving a masterclass in solid combative defence. But the placing of the three JC’s proved a master stroke – Johnny Coen offering himself as a link / cover player in defence, Joe Canning pulling the strings and dictating the game in an attacking midfield role, and Joseph Cooney’s unselfish role in negating Clare’s most influential player to date, Cian Dillon. I have to say I like Galway’s style – they are aggressive and tigerish in defence, seek to play the ball to the best available option once ball is turned over, and then deliver good early ball to their speedy forwards. There is no over-elaborate or intricate passing patterns, just straight up first time hurling – but more about that later. They will be buoyed by this victory and their semi-final date with old adversaries Tipp, promises to be the game of the year.

Joe Canning was exceptional in his new “play maker” role

Clare for their part, had all the hall marks of a team that peaked last April. I felt they were psychologically drained since their League Final triumph, and made very hard work of disposing of a Limerick team that were waiting to be put out of their misery since failing to secure Division 1A status. They had no answer to Galway’s power play and their lack of aerial ball winners ultimately proved to be their undoing. Colm Galvin was their one bright spark, providing all with an exhibition of his undoubted range of talents. Who knows what would have transpired if Conor McGrath had been on from the start, or Tony Kelly, Darach Honan or John Conlon had retained their league form. Aside from the what ifs, much analysis will centre on their controversial system of play. At the end of the day, teams at this stage of the championship are going to equally as fit as each other and will look to at least match each other’s work rate.

Clare’s high energy game is predicated on exposing a lack of pace and fitness in their opposition. They have proven that this will suffice at league level, where teams (as Kilkenny demonstrated) are a yard off championship pace. But the harsh lessons are that a) that type of game is virtually impossible to maintain from February to September and b) the good teams will reel you in and leave you in their slipstream by late July. There is no doubt they have the quality to reach their lofty heights of 2013, but Davy Fitz and his backroom team have to accept that this system is ultimately going to be futile.

Regrettably, this is the bit where the tone of the article takes a nose dive. The first quarter final between Wexford and Waterford is a strong contender for the “Worst Game of 2016” gong, and there’s some fair stiff competition in that regard. Before anyone comments to the contrary, I’m well aware that hurling is in an evolutionary state (which it always will by the way!), and that there were plenty putrid games in bygone years, and “sure Limerick aren’t exactly shooting the lights out so who’s he to talk!” I can accept that not every game is going to be a swashbuckling 100 mph edge of your seat epic, but there are a few things that I find unacceptable at this level of competition. The shocking first touch, the constant fumbling, the never ending rucks, the targeting of the catching hand as a legitimate method of tackling, the moronic use of the ball in attack, the lateral running into trouble – the list goes on. Ironically enough, it is Waterford, despite winning by 10 points, who were the biggest culprits. On ability alone, they are well ahead of Wexford, and are considerably further down the line in terms of their development and Championship aspirations.

They have some of the best young talent in the country (Gleeson, de Burca, Bennett brothers, Pat Curran to name but a few) along with seasoned campaigners like Kevin Moran (outstanding last Sunday) and Brick Walsh. Yet for all their attacking ability, they were reduced to taking pot shots from 70 – 100 yards out, with often only one forward inside the opposition 45. Had they not learned anything from the calamitous Munster Final malfunction – where Darren Gleeson and his full back line were made look like glorified ball boys delivering ball after ball, uncontested, to their voracious forwards?

Whatever happened to the serial Deise snipers like Flynn, Kelly, Mullane, Shanahan – who’d smell a goal before the bus left Dungarvan for proper championship matches. I have to say I’ve always been a fan of Waterford and have a huge affinity with them having played colleges hurling with WIT, Interprovincial with some of the greatest players ever to play in the white and blue, and having a better half from the Land of the Bla! I also think that Derek McGrath is a highly intelligent and composed individual who has brought Waterford back to the top table of hurling. But their method of play is doing a disservice to the talent they have at their disposal, and he has to recognise this fact if they are to become real contenders. Of course the end justifies the means, as that great hurling analyst Machiavelli once said, and it got Waterford over the line last Sunday.

John Mullane was a good man to raise the green flag

But I’m pretty sure this method of play will not achieve the ultimate end for Waterford hurling. At some point, the system will have to be tweaked considerably to allow their marquee forwards access to the goal scoring zone. They have to start trusting in the ability of their impressive defensive unit, retain their sweeper if needs be, albeit in a less pronounced manner, and learn to put opposition teams on the back foot again. In other words, throw caution to the wind – it can’t be any worse than a 21 point drubbing for playing a conservative game. The 2016 championship, and hurling in general, really needs Waterford to take that leap of faith.