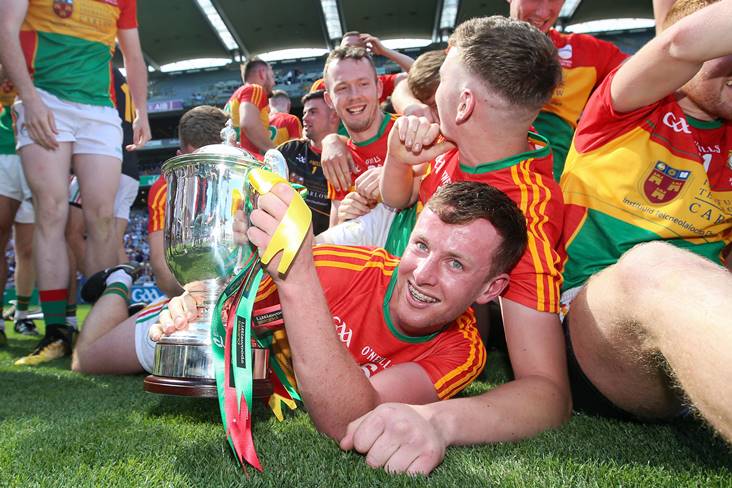 Carlow became the inaugral winners of the Joe McDonagh Cup and gained promotion to next year’s Leinster championship after a 2-26 to 1-24 win over Westmeath at Croke Park.

Colm Bonnar’s side dominated for much of the game as Westmeath hit 10 wides in the opening 25 minutes. Despite this Westmeath led 0-13 to 0-12 in 1st half stoppage-time after Aonghus Clarke effort from close range went over the bar instead of under. The key moment then followed seconds later as from the puck-out Carlow went down the field and James Doyle netted to give Carlow a 2 point half-time lead.

Chris Nolan then notched a goal just after the restart as Carlow led 2-14 to 0-13. Westmeath gave there all for the rest of the game with Eoin price impressing, but with Chris Nolan, Denis Coady and John Michael Nolan on top form the Barrowsiders were never going to be stopped.

Things got worse for the Lake County in the 66th minute when Derek McNicholas was sent-off for 2 yellow cards. Niall O’Brien did grab a consolation goal deep into stoppage-time for Michael Ryan’s side who now face Wexford in the All-Ireland Preliminary Quarter-Final next weekend.

Carlow, who also defeated Westmeath in the Division 2A final in April, now take on Limerick.

Christy Ring Cup: London on course to record back to back...