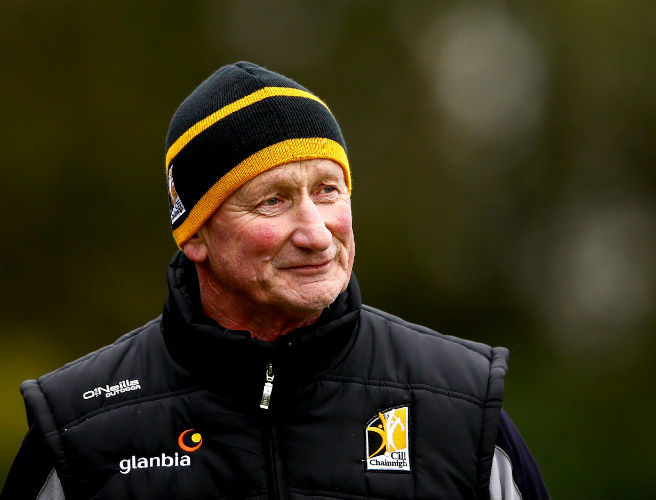 Never one to take the common view when the contrary one would do, Ger Loughnane had another barb at his old foe Brian Cody in his Irish daily star column this week when he said the Kilkenny manager should have stepped down after the All-Ireland final defeat against Tipperary this year http://www.independent.ie/sport/gaelic-games/hurling/does-he-think-he-is-indispensable-to-kilkenny-ger-loughnane-on-why-brian-cody-should-have-walked-away-35256585.html

When Brian Cody was ratified as manager by the Kilkenny county board for the 19th successive year last month, most people saw it as a positive development. Considering the level of success he has had, it’s reasonable to assume he is entitled to decide his own future. But Loughnane doesn’t think he made the right choice, and he certainly doesn’t spare the rod in explaining why.

“Does he (Cody) now think that he’s indispensable to Kilkenny, that he owns the job? This is the mistake the other two great long-serving managers in the GAA, Mick O’Dwyer and Sean Boylan, made at the tail-end of their careers. By the time they left, the cupboard was so bare that many years of famine ensued. Had he left, he would be leaving a team with a reasonable chance of winning silverware in 2017”

Loughnane’s viewpoint is very much against the grain of what everyone has been saying since September. Henry Shefflin was adamant for instance, in the wake of the All-Ireland defeat, that Kilkenny needed Cody more than ever. But then again, when it comes to the Clare man, we shouldn’t be surprised.

Second to managing teams to All-Ireland success, throwing verbal grenades is the Feakle man’s greatest legacy. For some reason, he has never been slow to poke at his old classmate from St Patricks College. Back during the brief period when Loughnane managed Galway in the 00’s, he made sure to mention of how Kilkenny were “pushing the rules to the limit”. And it was only last year that he decried that the two-in-a-row winning team of 2014-15 was “functional beyond belief”.

So Kilkenny would have a reasonable chance of success next year if Cody left the scene? Hmmm, it might be a reasonable one, but would they not have a greater chance of winning if he stayed on? It’s telling that in the very next line of the “functional” column last year, Loughnane stated Kilkenny are “getting the best out of what they have to an extent that no-one else could do other than Brian Cody” So Cody is getting the best possible from this Kilkenny team (2015), yet a year later he should step down? Well that sounds like a bit of a contradiction to me. Or a case of a contrary Clare man, who wants to make his own county’s path to All Ireland success easier.

As for the case for Cody to stay on, one only has to look at his record. In the last 18 years as Kilkenny manager he has won 11 senior All-Irelands, 15 Leinster Championships and 8 National Leagues. Only once during that time (2013) has the side failed to make the semi finals of the championship.

It’s interesting that 2013 was the season where Kilkenny struggled most, as it’s the one where Cody spent the least amount of time with the team in his tenure. The heart surgery that he had in April of that year, meant that he missed the league final, and a substantial period of training at a crucial time. Now you could say such a season was merely a result of a two in a row team taking a usual dip in year 3, but it’s a bit of a coincidence isn’t it? Kilkenny always seemed to be huffing and puffing in the championship that year, before Cork eventually disposed of them. Would performance levels have dipped so much if Cody was there night after night? So if Kilkenny fans want a glimpse of what a Cody less future looks like, then 2013, and a quarter final exit, is it. Given that, it’s no surprise supporters want to see him stay on.

Not being privy to the internal workings of what goes on in the dressing room, it’s not easy to pinpoint what makes Cody so essential to the cause. Funnily enough, he didn’t have a great reputation as a club manager prior to taking the job back in 1998, and yet his time as county supremo has been a marriage made in heaven.

But just say for argument sake, that Cody had stepped down a month ago, who would have been the person to take over? It’s difficult to see anyone from the incumbent set up doing so. I mean, obviously Derek Lyng and James McGarry are astute hurling brains, and Michael Dempsey is a fantastic physical trainer, but would you have entrusted any of them with sole ownership of the reigns? Or, more to the point, would any of them have wanted the job themselves? Because, they must know themselves, it’s a poisoned chalice.

The comparison between Cody and Alex Ferguson has been well made by this stage, and is one that Loughnane alluded to in his piece. Similar to Ferguson, there is an aura about Cody, a feeling that any team coached by him will arrive at a certain pitch come summer time. It was intimidating for referees and players to deal with the Scotsman for many years. Judging by the histrionics in this year’s replayed semi-final against Waterford, the same could be said of the Village man. While players and mentors may not be directly fearful of him, I sincerely doubt they want to see him prowling the side-line. If nothing else, that game against Waterford proved the man still has a savage hunger to win. The chronic slide that Manchester United have taken in the intervening years since Ferguson, left is not used as further evidence to why Cody should stay on. There is no more onerous task in GAA than being the man to follow Brian Cody as Kilkenny manager, as it’s nigh on impossible to surpass his achievements. So if Cody is Kilkenny’s Ferguson, Dempsey/McGarry/Lyng etc would run the risk of being the county’s David Moyes. So why would they do it? Or why would the Kilkenny County board  attempt to  convince a wildly successful manager, who clearly wants to continue, to stop doing it? Simply put, when something isn’t broke, there’s no point in fixing it.

“The bare cupboard” line is another interesting one emanating from the Loughnane piece. It’s true that the Kilkenny conveyor belt doesn’t seem to be producing as many under age talents as its heyday in the 00’s (Richie Power, Tommy Walsh, Richie Hogan et al). Then again, these are cyclical trends. Who’s to say in another few years, when he eventually retires,  another fresh crop of talent wouldn’t be coming through? The history of Kilkenny hurling would hint as much. You could argue the current side is possibly the least overtly talented Cody has had during his 18 years, and he still managed the not inconsiderable feat of steering them to an All-Ireland final.

Most inter-county managerial careers end in ignominy, but some men manage to go out on a high. Liam Griffin left Wexford after the All-Ireland success in 1996 to spend more time with his family. Liam Sheedy exited the Tipperary job after winning the 2010 All-Ireland due to work commitments. James Horan departed as Mayo Manager in 2014  because he didn’t feel he had the necessary hours to commit to it. So the job is obviously a massively time-consuming business. But if there’s one thing Brian Cody-a retired school principal who lives near Nowlan Park-has, it’s time.

So if we’re to make one final Ferguson/Cody analogy, Alex Ferguson was 71 when he retired, Brian Cody is a mere 62. I’m sure one day his health or hunger will fade, but why pressure him into leaving when it isn’t? Sure, what else would he be doing? Cody needs hurling, Kilkenny need Cody. And everyone else needs to find a way to beat him.

TO WIN JUST ONCE-The history of Mayo in All-Ireland finals since...