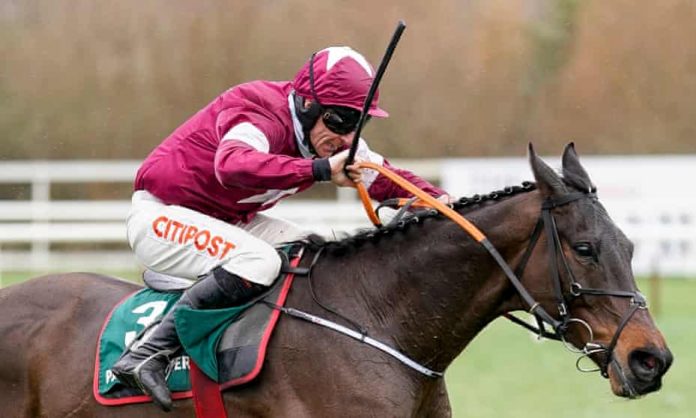 Michael O’Leary admitted that Conflated will run in the Ryanair Chase at the Cheltenham Festival, instead of the Gold Cup.
The Gigginstown House Stud owner wants a change and to go for a race he sponsors and won for the first time back in 2018 with Balko Des Flos.
Speaking to Sky Sports Racing O’Leary said: “I don’t think Conflated will win the Gold Cup, because if Galvin runs in the Gold Cup for Gordon, I think we’ll switch Conflated to the Ryanair. I don’t think Conflated would beat Galvin and I think it would make sense from Gordon’s point of view to divide the two horses. We’ll go and take on Willie (Mullins) in the Ryanair.”
Conflated landed the Paddy Power Irish Gold Cup at Leopardstown earlier this month.
O’Leary said that Tiger Roll will be retired after the Glenfarclas Chase. He already ruled him out for a third Grand National win.
Speaking about the decision to withdraw Tiger Roll from the Grand National O’Leary said: “If he (British Horseracing Authority handicapper Martin Greenwood) rated him at around 150 and gave him a 5lb premium for his past Aintree performance, he’d be 155, which is what the Irish handicapper rated him this time last year. We’d have run him at that and it would at least have given him a fair chance.
“You cannot defy age. He will not be in the Grand National by the time he runs in the cross country – he’s coming out at the next forfeit stage. I have no intention of asking the horse, who is like a fifth child to me, to carry 11st 8lb or 11st 10lb around Aintree at his age.
“Thankfully, the Tiger Roll controversy will never happen again because he will be retired after the cross-country race in Cheltenham this year.”