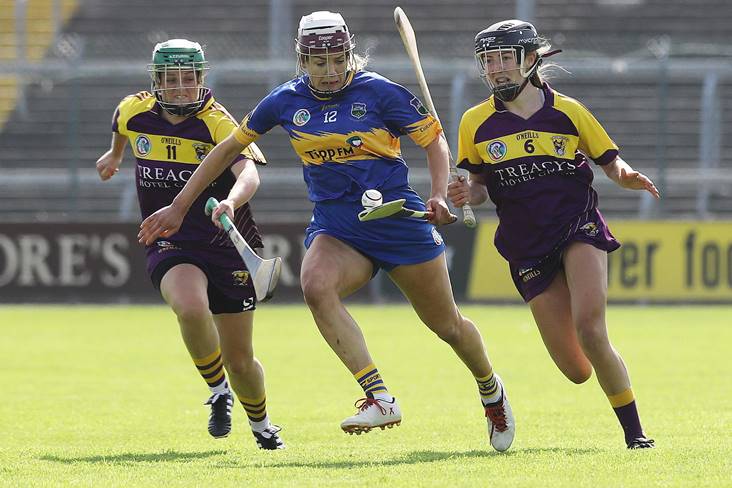 Cork moved to the top of Group 2 as a brilliant 2nd half helped them to an 18 point win over Dublinat Pairc Ui Rinn. Cork opened the scoring straight from the throw-in through Katrina Mackey and added 2 more scores before Dublin responded thanks to Emma Flanagan and Siobhán Kehoe. Mackey then fired to the net to put Cork in front. Dublin weren’t lying down though and grabbed a goal of their own through Orla Began. The game’s crucial moment came with nearly the last puck of the half as Linda Collins goaled to give Cork a 2-06 to 1-03 lead at half-time. It was all Cork after the break as Orla Cronin’s long-range shot found the back of the net while Julia White got their 4th major. Dublin did get a consolation as Began got her 2nd goal, but there was always only going to be one winner.

Tipperary made it 2 wins from 2 as a goal in the last minute of normal time from Mairéad Campion gave the away side a 1-14 to 2-08 win over Wexford at Innovate Wexford Park. The hosts made a rapid start to the game as midfield duo Karen Kennedy and Laura Loughnane and forward Cáit Devane (7 points in 1st half) helped give Tipp a 0-09 to 0-00 lead. To their credit Wexford kept believing and finished the half strongly as a 25th minute goal from Joanne Dillon made it 0-10 to 1-03 at the break. Wexford kept clawing back the lead in the 2nd half and a goal from Linda Bolger helped Wexford to a 1 point lead with 6 minutes. However, they could not hold on as Tipp equalisied before Campion’s strike won the game on 60 minutes.

Offaly earned their first win of the campaign with a 3-11 to 0-9 over Meath at St Brendan’s Park, Birr. The hosts , who are coached by eight-time All-Ireland Senior Hurling winner Richie Power (Kilkenny) , led 1-07 to 0-04 at half-time. Siobhán Flannery scored 2-9 in total with Linda Sullivan adding a fantastic goal. Jane Dolan was prominent for Meath, who improved from their last outing, but Mike Wall’s charges safCely held on for an 11 point victory.