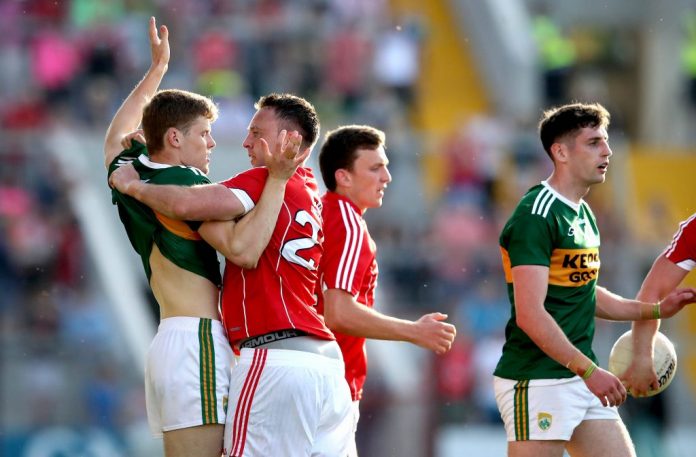 Cork have finally ended a long barren spell of eight years without a win over their Munster rivals Kerry as one of the favourites for the Munster and All-Ireland Championship have been knockout in what is the shock of the season so far.
Its shades of 1983 all over again when Tadgh Murphy scored the winning goals for the Rebels in dying moments of the game.

Fast forward thirty-seven years later as history has repeated itself, but this time there was no replay needed.  The Rebels were looking to make the Munster final for the fourth consecutive year in a row.

The one thing about GAA it’s riveting, it is wonderful, and it is also cruel, so, so cruel.      On a day where a hero was needed up stepped Mark Keane, the AFL player who is only home for a couple of weeks, marked his return with one of the most shuddering, time-stopping moments Gaelic football has seen.

Just like Tadgh Murphy goal in 83, Seamus Darby’s in 82, Kerry were sucker-punched in the cold as everything around them went to a fuzz. Kerry was just second’s away from reaching the Munster Final for it be taken away from them in a blink of an eye.
There always has to winner and a loser and you can’t imagine what it must feel like in the dressing room after conceding a last-minute goal.

While today’s Munster Semi-Final didn’t live up to its normally high standards it certainly had everyone on the edge of their living room sofa, as due to Covid 19 no spectators were allowed to attend the game.

In contrast, today’s game in which there were no more than two points between the sides through the entire seventy minutes and extra time.
When Kerry, held a 0-12 to 0-10 lead at half time in extra-time had that just cut down to a single point when Luke Connolly slotted over a super point in the seventh minute of extra time.

Both sides went onto to trade a point each to leave the score at 0-13 to-0-12 in favour of the Kingdom and with time almost up, Cork went in search for the levelling score to bring the game to a penalty shootout. But what unfolded next was something that no one could believe a miss a hope shot by Connolly from the near sideline found its way into the hands of Mark Keane and without hesitation buried the ball into the back of the net to knock Kerry out of the Championship.