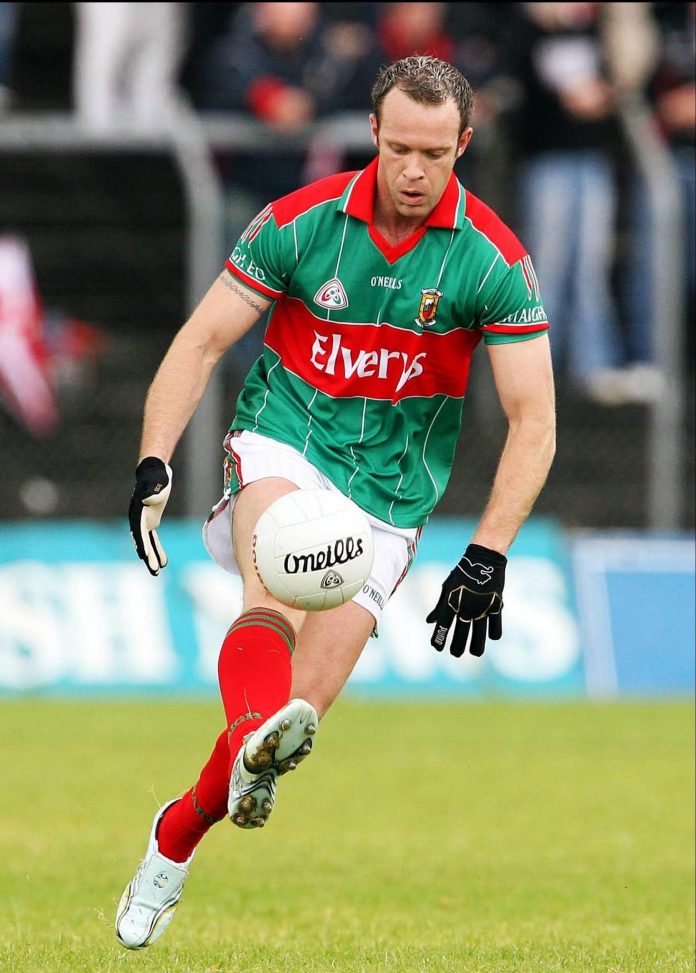 It is fair to say that former Mayo midfielder David Brady has had his fair share of ups and downs throughout his inter-county career. The Ballina Stephenites clubman has overcome disappointments in many All-Ireland Finals, along with various injuries over the years, to lead Mayo through the depths of adversity. In 2005 he finally put the hoodoo of defeats to bed, when he helped inspire his beloved Ballina to a historic 1-12 to 2-8 victory over Portlaoise in the AIB All-Ireland Club Football Final at Croke Park. Like many a GAA player, Brady accredits his love of the game to his community and family back home. He said: “Well, I grew up in the 80s. I lived in Ballina in County Mayo, in a small area called the Quay village, which for anyone outside of the cities was considered rural Ireland. I had 7 in my family, 2 brothers and 2 sisters. My brothers are twins. The area was on a river and that was a big thing for me growing up. I loved going fishing and it was a great source of fun for me. The 80s for a lot of people was tough, it was a simple enough life for us and we tried to make the best of it. We had a new school built and that was the key for me to start playing football, the school had a football and rugby pitch. I remember my 1st experience of playing was in a U10 town league. The town was split up into 4. You had the Quay, United, Pats and Fitzgeralds. We won the final in 1984. I scored a point. At the time it was a big deal for me. It was the catalyst and it lit a flame in me and gave me that love for GAA. You would have gone through the town afterwards, the horns beeping and you would sit outside the pub with crisps and a mineral in your hand. There was a great deal of excitement in the area for sure. Simple things like this meant a lot to you at such a young age.”

Thinking back to those early years Brady has huge admiration for many people in his area who introduced him to football. “My teacher at the time Mr Hugh Lynn had a big impact on me taking an interest in football. I’m forever grateful to him. Thinking back I had great early memories with my dad. In 1985, I went to an All-Ireland semi-final between Mayo and Dublin. It was the first time I saw my dad hug another man. The excitement on the train and craic was mighty. There was an old man who used to have an accordion and he had a can hanging out the front of it. You never forget those memories. I remember sitting on the very top of the Hogan Stand and Padraig Brogan, a legend of Mayo GAA scored a goal. I looked around and everybody was hugging and celebrating. It was one of the best goals I have ever seen in Croke Park. I also remember four years later the build-up to the 1989 Final. The buzz about the place was unreal and I remember watching the open training sessions. I suppose my transition into adult football would have come at 16 years of age. I got playing with the Ballina Stephenites junior team. At that time it was playing with guys who had played at senior club championship level. The step down they took gave me the step-up I suppose. The golden oldies as I would call them. I give great credit to them. They looked after me well and gave me an insight into football and more importantly life. They believed in me before I believed in myself if I could put it like that.”

David remembers distinctively his debut in the Mayo jersey. “My first experience of playing for Mayo was in 1994-95 as part of the U21 set-up, under the guidance of Martin Carney. He is another guy I would have had the utmost respect for. It laid the foundations for my senior career. We, unfortunately, were beaten in two All-Ireland Finals by Cork and Kerry respectively. I made my debut for the senior team in 1995. I came on as a sub against Roscommon in a national league game. It was on my home pitch in Ballina which was nice. I remember being proud as punch afterwards knowing I had finally made that step up to senior inter-county football. We were beaten in a league semi-final and All-Ireland replay over the next 12 months, so yeah it was a real baptism of fire. I would say throughout my Mayo career Anthony Tohill of Derry was my toughest opponent for sure. He had everything. If I was to have to change anything about the player I became, I would say that I wish I had perhaps taken on a role as a leader and tried to adjust quicker. As a player that is something I do look back on.”

Brady was involved in some classic games over the years. That memorable All-Ireland Final with Meath in 1996 is still talked about to this day. 27 players got involved in a brawl down at Hill 16. Brady himself doesn’t remember much from the game: “No, I don’t. All I can say is at that moment you either decide to take flight or fight. Whatever the reasons both teams didn’t back down and I suppose an All-Ireland meant so much to both counties. Clips of that game are still shown to this day.” Having been on the end of many defeats as a player, Brady’s day would finally arrive in 2005 when his club Ballina Stephenites claimed the All-Ireland club title defeating Portlaoise by the narrowest of margins. “Again I don’t remember too much from that game only that my brother Liam scored the winning point. Portlaoise had pegged us back with a goal and I did think to myself no not again. When we won that game it was very exciting and emotional for everyone. These are the guys you grew up with, that you went to school with. It is a feeling that stays with you. That was my seventh All-Ireland and I finally got there.”

Brady would eventually have to retire due to a back injury in 2008. His outlook on his career with Mayo is fairly philosophical. He said: “Look I never saw it in terms of how many finals I won and lost. Each year I would have said to myself ok how do I try to improve as a player. Getting to play for Mayo for 13 years was a blessing in itself. I had some great memories with the lads. We got to go away together and I look back on those days as much as my playing days. Let’s just say heading off with a group of lads to Indonesia or Orlando got you in some interesting situations. Them moments you will treasure forever.” Brady has been involved with ‘Off the ball’ on Newstalk for the last 13 years and remarks that it was an opportunity he couldn’t turn down: “Yes the year after I retired I just started doing bits and pieces and it went from there. I would do work mainly on weekends along with my full- time job as a medical rep. Also having young children takes up a substantial amount of time and it’s important to stay committed as much as you possibly can.”

Brady is renowned for being a kind and honest guy and this was shown over the last 18 months in particular. He said: “I was asked to phone an elderly man in Wicklow who had been suffering, due to isolation from the current pandemic. The pandemic has been tough on the elderly so I gave this man a call and talked about GAA and life. I decided to keep going with it and I think I have rung a few hundred people, not just in Ireland but also abroad. To be honest they have taught me a lot and shared their stories. I am more than happy to help. We all need a good chat sometimes.” David was known for his aerial ability as a player. He believes that the role of the midfielder has changed since he finished playing. “The game almost bypasses the middle sector. The game isn’t necessarily about winning the ball in the middle. It is important, but not to the level it once was.”