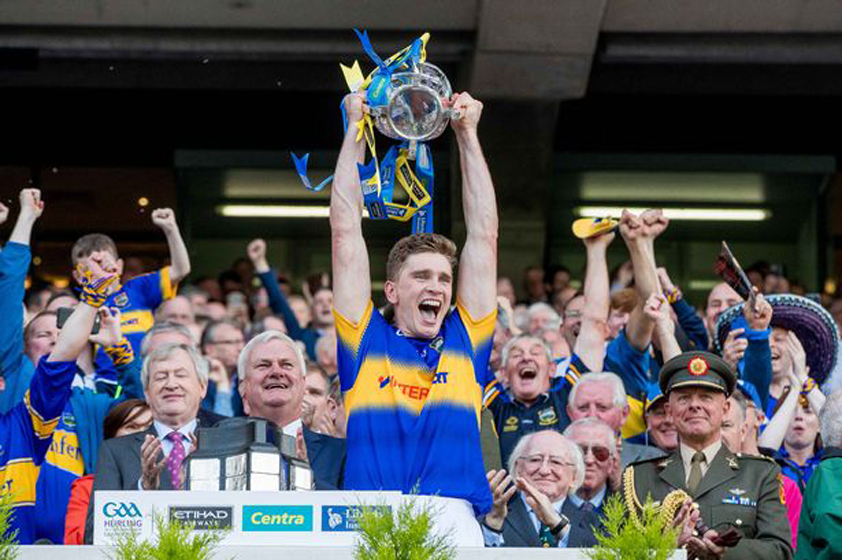 “I told you! I told you they’d be a different beast today.” I still remember Martin “Gorta” Comerford saying those words to the rest of the subs as we watched on in the 2010 final. Although the clock had only lapsed 5 minutes the warning signs were already in evidence to him. Not until last Sunday had I seen a team show the same cut and thrust against Kilkenny.

Despite Kilkenny breaking even over the first quarter the cracks were beginning to show and the mere 2 points that separated the sides simply camouflaged the clear superiority of the Tipperary hurlers. 6 years of pain and defeat flowed out in every yard ran, every ounce of pressure inflicted and every ball overturned. They were simply relentless!
Tipp’s 12 scores from play to Kilkenny’s 6 in the first half telling its own tale. It could have been even greater where it not for the often careless shooting from Bubbles in the first half but let’s be honest, the man and team were on a mission, a road to redemption as he later broadcasted in the post-match interview. They had only sights for one thing and that was to wound Kilkenny given any half opportunity.

In spite of Kevin Kelly’s early second half goal you could almost sense a false hope descend over the Kilkenny supporters. Nothing up to that moment pointed to a team capable of mounting a realistic surge to drive on and finish out the remaining minutes left which is what we have become accustomed to with Kilkenny. Instead over the next ten minutes Tipp simply shrugged off the score and registered 1.04 without reply.

The mantra from Brian Cody in every team meeting when discussing the half forward line has been “Get up and win your own ball.”
Unfortunately on Sunday it was Tipp who stole this advice and cleaned out Kilkenny on their own puck outs. This was the starting block for most of Tipp’s attacks as the Maher’s plus Kennedy aimed a barrage of cross field balls inch perfect into a Tipperary full forward line, who couldn’t have believed the space afforded to them and each one played out every young lad’s boyhood dream final performance scoring a combined 2.15 from play.

I always feel that while Tipp and Kilkenny can grind out a win against any other team after losing the tackling count, they simply cannot do so against each other. The team that works the hardest wins. Tipp obliterated Kilkenny Sunday 56/34. That stat on its own tells you that the Liam McCarty was only ever going one way.

On a day when little or no silver lining could be found for Kilkenny, Eoin Murphy’s incredible performance shone through. His 3 saves, most notably the 3rd one which was almost superhuman stopped Tipperary from inflicting an even greater pounding. Why Kilkenny defenders don’t use him more often in the game is beyond me.

This is a player in the form of his life, a guaranteed All Star who has won numerous honours with club and college outfield. On seven separate occasions when Tipperary had cornered or applied incredible pressure on an isolated Kilkenny defender, Murphy made himself available in space to relieve the pressure and set up an attack. Instead the Kilkenny defence decided to ignore his help, tried to clear under pressure, were either dispossessed or the clearances went astray, leading to 3 Tipperary points.

For Tipperary the relief of finally breaking free from their controlling masters was evident as the final whistle blew. The older members collapsed to their knees, grateful to have finally escaped the shackles placed on them since 2010. They now face into a winter of huge celebration and contentment. The lessons will surely be learned from the last time they tasted the ultimate glory in 2010 and following the u21 victory six days later many proclaimed that an era of dominance would then commence.

This as we know did not. This time around however, unlike then, when manager Liam Sheedy resigned, they will start the new campaign next year with Michael Ryan at the helm again. This continuity is key as they will surely look to follow up with back to back titles. Whether they have the drive and hunger only time will tell but one thing is for sure they have the youth, talent and bench to do so.

For Kilkenny they face into an unknown not experienced for some time. History will point to Cody’s incredible ability to rise from the ashes of defeat in ’01, ’10, and ’13 to then lead them to back to back titles in ’02/’03, ’11/’12 and again in ’14/’15. There’s no escaping the elephant in the room however. A major help in doing this was down to the abundance of All Ireland winning minor and u21 winning teams coming through helping the resurrection. Kilkenny now haven’t won an u21 Leinster in 4 years and have only won 1 minor All Ireland out of the last 6. A sobering thought for all Kilkenny supporters.

Three days on, one thing is for certain. Every county team in Ireland will face into the 2017 season with renewed hope they can capture the Liam McCarty after Sunday’s result. A return to the glory years of the 90’s could possibly be in store with Waterford, Galway along with Clare all knowing they now have a chance to claim the ultimate glory after this seasons narrow defeats. However it’s Tipperary’s for now. Worthy champs!

A quick chat with Jamesie O’Connor