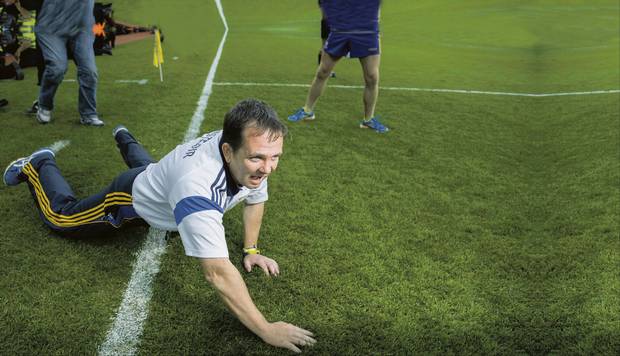 So if the rumours are to be believed, Davy Fitz is heading to the sunny South East to take over the Wexford hurlers. This is a big shock to the hurling world. Most people believed he would take time out and come back refreshed next year especially after having a health scare a few months ago. So what can Wexford people expect from Davy Fitz? There will be a lot of focus on the team in the media, there will be an entourage of coaches, stats men, dieticians with Davy in the backroom team, they will train extremely hard and more than likely will play a sweeper system. No matter what people think of Davy Fitz, he adds a buzz to the hurling community. Davy is a good manager but he has lost his way in recent years. He is constantly trying to come up with new ideas and strategies to out fox other teams. He might be better off keeping things a bit simpler.

The Clare players absolutely loved Davy in the first few years of his term in charge. Brendan Bugler was quoted after the All-Ireland victory over Cork as saying “I love Davy Fitz; I owe that man everything”. He did owe him everything, Bugler like John Conlon had barely mustered a Championship victory to their name before Davy came on board, and here they were winning an All-Ireland medal in 2013. Bugler also won 2 All Star awards with Davy at the helm. He had put Clare on the map and many people expected Clare to be in the mix for All Ireland titles for the next few years. Clare however have not played at Croke Park since, they have only beaten Laois and Limerick in the championship since 2013 – a very poor record. Davy took the plaudits in 2013 for that brilliant All Ireland victory but he also has to take some of the blame for what has happened since. Clare had won 3 Under 21 All Ireland’s in a row so there is obviously a lot of talent in the county.

It will be interesting to see how Davy will tactically set up the Wexford team. The last 3 All Irelands have been won by Kilkenny and Tipp playing open expressive hurling – no sign of sweepers! Davy will get a great response out of the Wexford players for the 2017 season. The set up will be more professional than they have ever witnessed before and as everything will be new and fresh to them. They will be training at 6 in the Morning, having regular 3-day training camps, lots of team meetings etc.

The main problem with Davy is he expects too much out of his players. It is not possible to keep up that level of training year after year. Clare have regularly gone back training in early November (some players just finished club action) and train extremely hard. Players eventually get burned out and lose interest and motivation, hence the action taken by certain Clare hurlers. They felt they needed a change as they were not willing to give the same commitment again. There were strong rumours that a few well known Clare hurlers were going to go travelling if Davy had been given another year in charge. Turn back the clock to when Davy was in charge of Waterford, the first year they absolutely loved him but as time went on that love drifted away. Eoin Kelly and John Mullane celebrating in front of Davy after Waterford had beaten Clare in the Munster championship only a few years later.

Davy Fitz is a great hurling man, I for one am excited to see what he brings to Wexford hurling. I would love if he relaxed a bit and let the Wexford hurlers play with a bit of freedom. He has good hurlers to work with, remember Wexford had serious injuries in 2016. Clare Vs Wexford in the championship 2017 – I dont know about you but I for one would look forward to that one!

Hurler On The Ditch

Can Waterford “sweep” the Cats aside?