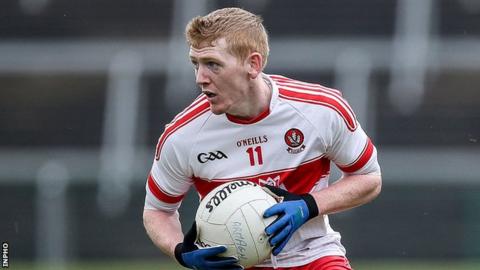 Derry have cemented their place in the 2019 Allianz football league Division 4 final and have gained promotion back to Division 3, after an impressive five-point win over Limerick at the Gaelic grounds on Saturday afternoon last.

What a difference twelve months can do to a team and to its players. This time last year Derry were all but relegated to the lowest division of the league, but as we fast forward twelve months later, this new and rejuvenated side have been a joy to watch this season, and they have gone unbeaten so far in the league after winning their first five games. They will now go head to head with Leitrim in two weeks-time which is going to be a preview of the final.

In the latest round of the Allianz football league it was the Munster men who started the stronger as Peter Nash put them into an early lead, then Colm Mc Sweeney’s high ball sailed all the way to the back of the net and it was a dream start for Limerick.

Ciaran Mc Faul opened Derry’s account with a well taken point and he almost set up Christopher Bradley for a goal as his great ball in was met by a delightful flick by Shane Mc Guigan to put Bradley in on goal but his effort hit the crossbar and went over the bar for a point.

Both teams were neck and neck during the first half as Derry were reliant on the accurate Christopher Bradley and his free taking ability, while Limerick were dependent on Peter Nash. At half time the margin was reduced down to two as Derry pointed deep into first half stoppage time from Christopher Bradley  after a wonderful pass by Mc Faul to see the scores at the break 1-04 to 0-05 in favour of the Munster men.

Whatever was put in that half time cup of tea for Derry proved to be wonderful as they played their best football in that period as Limerick now looked a team frozen in time, and it was only going to get worse for the Munster contingent as Padraig De Brun was sent off after striking out at Derry’s Jason Rocks in an off the ball incident.

The excellent fielding from Derry was just brilliant and the new mark rule that is currently on trial served us up a treat, as Shane Mc Guigan’s point from the mark gave the oak leaf men a three-point lead after forty-five minutes.

Derry had another attempt on goal when substitute Ryan Bell was put through on goal but he lost control of the ball at the vital moment just as he was about to pull the trigger.

Further Derry points came from Shane Mc Guigan and Karl Mc Kaigue ensured that it would be the oak leaf men safely through to the division four final.

In the entire second half Limerick managed only one-point when Jamie Lee slotted over five minutes from time.

Why do the GAA hate the CPA so much?